Balanced‐​Budget Amendment to the Constitution

Presidential candidate Rand Paul has announced his support for a balanced‐​budget amendment (BBA) to the U.S. Constitution. This is an old idea, but a good idea. A BBA has been proposed in Congress as far back as 1936. In 1982 the Senate passed a BBA by a vote of 69–31, but it failed to get the needed two‐​thirds approval in the House. In 1995 a BBA passed the House by a 300–132 margin, but it fell one vote short of passage in the Senate.


Today we need a BBA more than ever. Historical budget data show that federal politicians have become increasingly irresponsible over the years. The bipartisan 19th century belief that balancing the budget was morally proper and economically prudent disappeared during the 20th century. As the chart below shows, from 1791 to 1929 the federal government balanced its budget in 68 percent of the years. But from 1930 to 2015, the government balanced its budget in just 15 percent of the years. 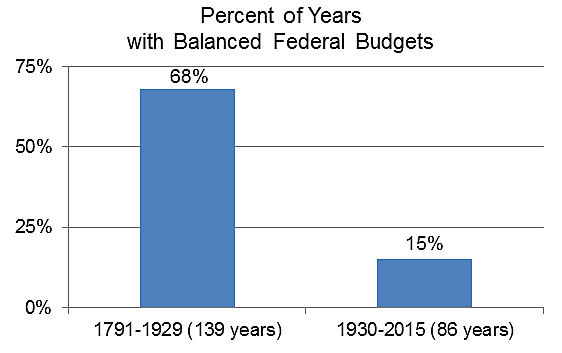 What changed in the 1930s? The unfortunate rise of Keynesian economics encouraged politicians to think that deficit spending helped the economy. Also, the 1935 creation of Social Security launched the government into the era of “entitlement” spending, which is spending that is on automatic pilot. Entitlement spending grows relentlessly year after year without politicians having to vote for the increases. It allows politicians to pretend that they are not responsible for the resulting deficits and debt.


A legal cap on overall federal spending would be a better way to restrain the budget than a BBA. But either way, let’s hope that Paul can spur a renewed debate on fiscal control. We need it: despite today’s growing economy, the current administration recently proposed a budget that has half‐​trillion‐​dollar deficits as far as the eye can see. From a historical perspective, that sort of disregard for fiscal prudence is remarkable. In his 2014 book, America’s Fiscal Constitution, Democratic politician and financial executive Bill White argued that until recently, aiming for balanced budgets was part of an “informal constitution” that both parties understood.


Another 2014 book, A Nation Wholly Free, examined the drive to eliminate the federal debt under President Andrew Jackson in the 1830s. Author Carl Lane found,

Debt freedom, Americans in the Jacksonian era believed, would improve the material quality of life in the United States. It would reduce taxes, increase disposable income, reduce the privileges of the creditor class, and, in general, generate greater equality as well as liberty.

Those early Americans were right about debt freedom. A frugal government that balances its books helps to secure liberty and benefits average citizens. Hopefully, Paul and other reform‐​minded candidates can revive such sound fiscal thinking in Washington.