Ayn Rand on the Front Page of Ecuador’s Major Newspaper 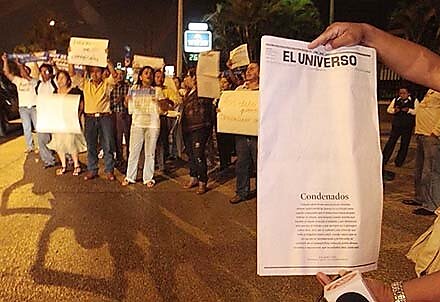 El Universo, the newspaper with the largest circulation and the paper that publishes my weekly column, ran a mostly blank front page today that features only this quote from Ayn Rand’s Atlas Shrugged:

When you see that trading is done, not by consent, but by compulsion–when you see that in order to produce, you need to obtain permission from men who produce nothing–when you see that money is flowing to those who deal, not in goods, but in favors–when you see that men get richer by graft and by pull than by work, and your laws don’t protect you against them, but protect them against you–when you see corruption being rewarded and honesty becoming a self-sacrifice–you may know that your society is doomed.

This quote is from Francisco D’Anconia’s speech on “The Meaning of Money” which you can read here. (I used it in my column last month.) How did Rand’s quote get there? It’s a response to the latest and most prominent attack on freedom of the press in Ecuador and Latin America.


In less than four months the Ecuadorian courts, known for being slow, resolved the specious lawsuit President Rafael Correa filed against op‐​ed writer and editor Emilio Palacio, the directors of El Universo and the newspaper itself for libeling the country’s president. According to Correa, Palacio slandered him in this op‐​ed (in Spanish), and the newspaper and its directors “contributed” to committing the supposed crime. Incidentally, this court has had five different judges overseeing this case since February; the last one came in on Monday and issued his judgment yesterday, minutes before his authority expired.


The court’s decision sentences the directors of El Universo and Emilio Palacio to three years in jail and orders them to pay a total of $30 million to the President. The judge also ordered that the newspaper company pay an additional $10 million to President Correa.


This decision sets a dangerous precedent of making third parties responsible for what an individual says. It is a clear act of intimidation of all independent media outlets and of the citizens of Ecuador. Even though this is not the first blow to freedom of expression during this government, it certainly is the most radical given the context. On May 7th, a referendum gave the President unprecedented power to essentially pack the courts. Soon, the entire judiciary will be on the long list of state institutions captured or co‐​opted by the executive (including the constitutional court, the electoral authority, and the national assembly, among others).


Once the judiciary is completely captured and after this historic decision, we can expect more self‐​censorship or more people sued/​jailed for expressing their opinions, or a combination of both. It is a harsh blow against liberty in our country, but a logical outcome of Correa’s populist push to centralize ever more economic and other power in his own hands.