For months, news articles and commentaries have decried the supposedly huge tax cuts for the rich passed by Republicans in December. In a classic rhetorical formulation, a New York Times editorial in February said, “Republicans designed the law to principally benefit wealthy families while offering crumbs to low‐​income and middle class families.”


Actually, the largest relative tax cuts went to the middle class, as I discuss here. But perhaps some people have fixed views on the tax cut, and can’t imagine the Republicans doing anything other than favors for plutocrats.


So let’s try a different angle and look at overall burdens under the GOP tax law, which went into effect January 1. The official tax scorekeeper, the Joint Committee on Taxation, recently published estimates of average income tax rates by income group for 2018, which are presented in the table below. The tax rates are income taxes paid divided by total income within each group.


In aggregate, households with incomes of less than $50,000 do not pay any federal income taxes. Instead, they receive large subsidies from the U.S. Treasury in the form of refundable tax credits. Those subsidies to low earners are expected to jump from $83 billion a year before the tax law to $99 billion after the tax law (page 48).


That is more than crumbs. 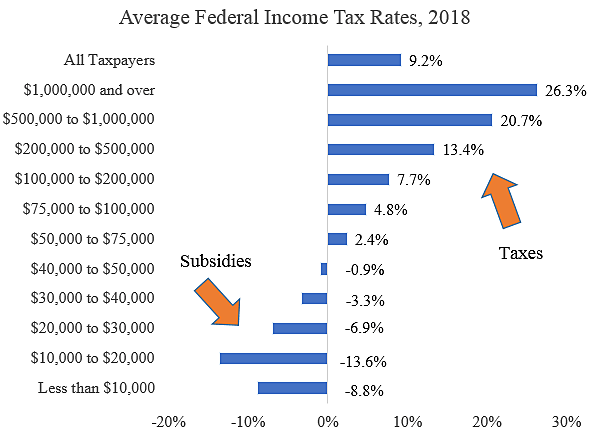 Data from Table A-6.