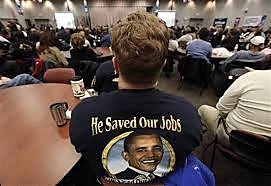 President Obama is in Michigan today, which means his handlers at the White House recently consulted their very thin manila file folder labeled “Economic Successes or Anything That Might Pass for Such” to cull talking points about the auto bailout. Of course, nothing has been more celebrated as an economic policy success of this administration by this administration than the “rescue” of GM and Chrysler.
I spent a good deal of time in 2008–2010 analyzing, commenting, and testifying about the collateral damage–the often unseen but important externalities and longer term costs–that was being inflicted on third parties, the U.S. economy, and the rule of law, all for the purpose of ensuring that specific interests were insulated from the consequences of their behavior. So let me just summarize by repeating some previous thoughts.
It is galling to hear the auto bailouts characterized as “successful.” The word should be off‐​limits when describing this unfortunate chapter in U.S. economic history. GM and Chrysler, through their own relatively poor decisions with respect to labor contracts, product offerings, and quality management, failed by the market’s judgment and were rightful candidates for downsizing or liquidation. The bailouts essentially deprived the better auto companies of the spoils of competition and forestalled a capacity reckoning, which meaning that in the years ahead, auto workers in Alabama, Tennessee, South Carolina, Indiana, and even Michigan and Ohio may lose their jobs because GM and Chrysler were propped up beginning in 2009.
Calling the bailouts “successful” is to whitewash:

Acceptance of the president’s claim of auto bailout success demands profound gullibility or willful ignorance and virtually guarantees similar interventions in the future.