An Australian Perspective on Joe Wilson 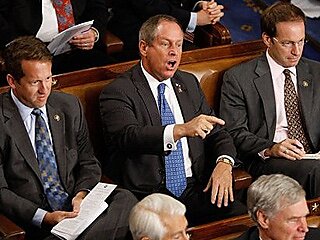 Will you allow a foreigner to comment on something that has intrigued her about this great country?


All this hand‐​wringing and then censure (not to mention impeachment talk) over Rep. Joe Wilson’s admittedly rude intervention at President Obama’s speech last week has me baffled. Partly, it is because I come from a land that is governed by a parliamentary system, where Question Time is a much‐​loved institution. The offense (manufactured, perhaps) that Representative Wilson’s comment has caused is almost laughable when I think about some of the insults that have been hurled in both directions in Australia’s parliament. Here’s a collection of quotes from former Australian Prime Minister Paul Keating just for starters (warning: offensive language). Here is a Brit’s take on why American politicians are “a bunch of wimps.”


Mainly, though, I am surprised that questioning of power is not more valued in America. To be sure, the President of the United States is not answerable to Congress in the same way that Ministers (including Prime Ministers) are to a Westminster‐​system parliament, but I would have thought that questioning the president would be well within the bounds of a nation conceived in liberty and on the understanding that all men are created equal. You got rid of infallible kings in 1776, remember?


I get why the Democrats are making political hay out of Representative Wilson’s outburst, even if I think they are hypocrites for suddenly finding religion on civility, given their own history. And I thoroughly reject, by the way, the notion that much of the criticism directed towards Obama is based on racism, even if this sort of talk gives unfortunate credence to the claims. But those same Dems who are shocked (shocked!) by Joe Wilson’s behavior are right now allowing a tax cheat to pull the nation’s purse strings.


This focus on style — who says what, how they say it, what their motivations might be — over the substance of what the congressional and administrative branches of government are doing is tremendously disappointing. I have heard far more censorious talk about Joe Wilson’s character and the propriety (or lack thereof) of what he did than of the point he was making. Meanwhile, the Dems are keeping “internal” investigations of Charlie Rangel’s ethical violations very quiet indeed.


Quite frankly, I’m far more interested in those than I am in Joe Wilson’s rudeness.