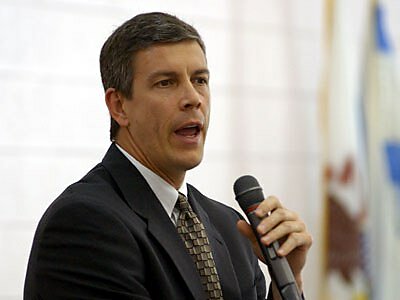 Arne Duncan has an op‐​ed in the WSJ today headlined, “School Reform Means Doing What’s Best for Kids: Let’s have an honest assessment of charter schools.”


So how about an honest assessment of how the DC voucher program is doing?


I guess I won’t hold my breath, since Duncan already neglected to bring the findings to light during the debate in Congress and then he tried to bury and spin away the positive results when they did come out. And then he needlessly prevented 200 poor kids from enjoying good schools for at least next year.


President Obama and Duncan’s unwillingness to address the facts show that they have been hypocritical and dishonest on education.


I can’t say it any better than Juan Williams did:

By going along with Secretary Duncan’s plan to hollow out the D.C. voucher program this president, who has spoken so passionately about the importance of education, is playing rank politics with the education of poor children. It is an outrage …


This reckless dismantling of the D.C. voucher program does not bode well for arguments to come about standards in the effort to reauthorize No Child Left Behind. It does not speak well of the promise of President Obama to be the “Education President,’ who once seemed primed to stand up for all children who want to learn and especially minority children.


And its time for all of us to get outraged about this sin against our children.