Arizona state representative Sonny Borrelli (R) remarked that crime rates in his state dropped 78 percent since the passage of that state’s infamous SB1070 in 2010. His remark was thoroughly debunked. Below are a few charts to put Arizona’s crime rates in context.

It is very difficult to show causality between a law and its effect on crime in later years. Crime rates have trended downward in the United States for over 20 years now. It is difficult to credit any decline after 2010 to a specific Arizona immigration law.  Also, Arizona’s crime rate cannot be considered in isolation. Comparing it to neighboring states and the country as a whole which did not pass an SB1070-type bill is necessary to even get a slight hint of how that law on crime.  Furthermore, there is a vast empirical literature on the effect of immigration on crime. At worst, immigration has almost no effect on crime. At best, immigration decreases crime rates.

All of the figures are presented as a rate of crime per 100,000. The violent crime rate in Arizona was declining before SB 1070 and continued to decline afterward (Figure 1). From 2009 to 2014, the Arizona violent crime rate declined by 6.3 percent while it dropped 13 percent nationally. There was a decline of 16.3 percent in California, 9.9 percent  in Nevada, and 5.5 percent in New Mexico. 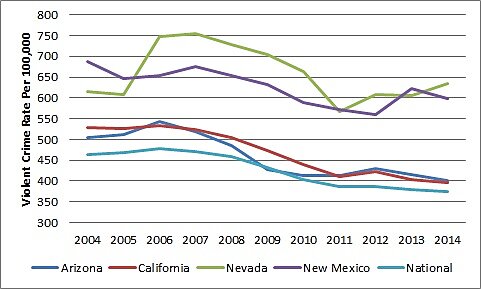 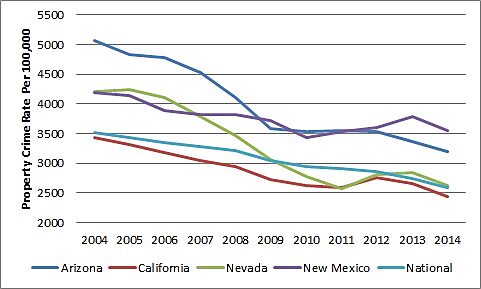 Since much of SB1070 was struck down by the courts it should be even more difficult to pinpoint its effect on crime.