Are We Building Enough Housing?

One of the primary reasons the labor market remains weak is that construction activity is relatively low, resulting in a reduced demand for construction workers.  My friends in the building industry argue that because housing starts are at historic lows, we are actually not building enough housing.  While I'm open to that as a possibility, and believe it to be the case in select markets, nationally the evidence suggests otherwise.

First of all, the monthly supply of new homes — that is the time that would be required to sell off the current inventory — is still relatively high at just under seven months, as shown in the following figure. Granted this is significantly below the 12 month peak we saw at the beginning of 2009. So without a doubt this number is moving in the right direction, but it still has a little ways to go. I will be far more optmistic about the housing market when we get to around five months' new supply. 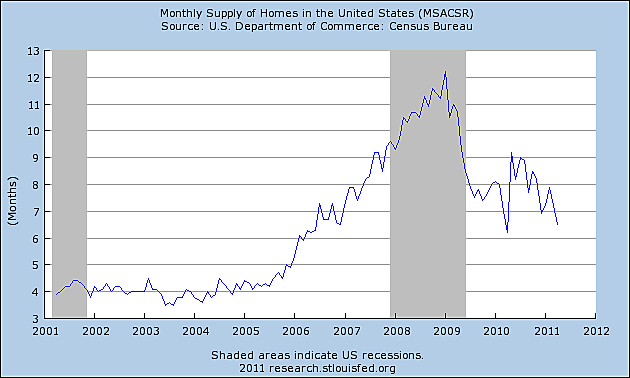 Second, if you compare sales to new housing starts*, which the next graph does, you see that we are back in the range of where these two numbers are largely in historical balance.  Sales are no longer working off the existing inventory, not like we were in 2009.  So while construction activity is low, it is still more than sufficient to meet current levels of demand.  The question for debate is, really, when will demand increase and how much will it increase?  Personally I have a hard time seeing a lot of the speculative demand for housing coming back soon, at least not without further large price declines.  In terms of additional demand coming from delayed household formations, I am confident that builders will be more than able to meet that demand when it comes back — but I also doubt that demand will be large enough to put 2 million unemployed construction workers back to work.

*(Sales to starts generally falls far below 1.0 for a varietyof reasons, including that some starts do not ever reach completion, and that some are built by the owner and never sold.  It is extremely unusual to see that ratio surpass 1.0, as it did in 2009.) 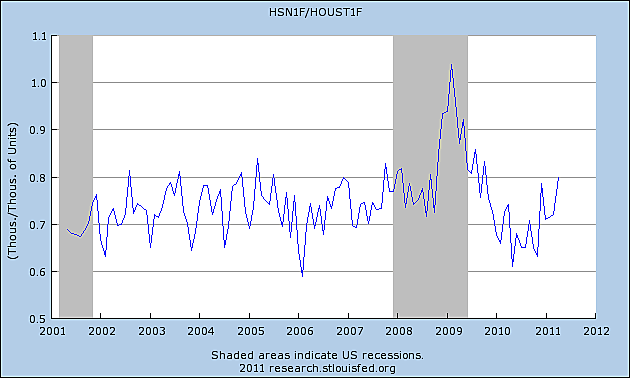