The Parkland shooting, even almost two months later, remains a very painful topic, and there seem to have been many very important factors at play. One that hasn’t been discussed very much, but probably needs to be examined, is whether the kind of schools students attend makes a difference. At least one author, Stella Morabito at The Federalist, has discussed this, and has identified many problems that she thinks are associated with public schools ranging from their large sizes to their seeming hostility to Christianity.

All of the problems she discusses may be factors—school size has been suspect for a long time—but as a starting point we ought to look at the numbers.

Hyewon Kim—a Cato Center for Educational Freedom Intern—compiled information on school shootings in the United States from 2000 to 2018 using the Tribune‐​Review database. The database is limited to legitimate school shootings; that is, shootings that occurred on or near a K-12 school campus while classes were in session or when students were present. The list also excluded suicide‐​only incidents. 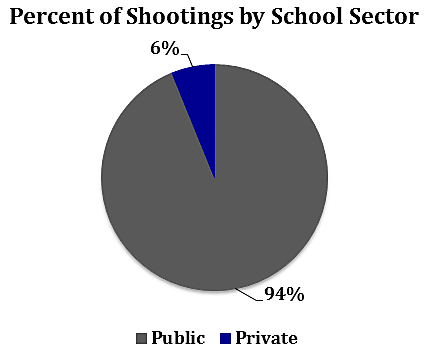 
Of course, considering the difference in the number of students across the two sectors does not account for differences in the types of students. After all, at least some of the divergence in school shootings found are likely due to other factors such as household income and parent education levels.


However, a recent study by Danish Shakeel and me, presented at the International School Choice and Reform Conference, finds that private schools experience better school culture than public schools even after controlling for several characteristics such as school size, location, racial composition of students and teachers, and the percent of students from low‐​income families. We find that private schools are significantly less likely than public schools to experience problems such as student fighting, bullying, and, perhaps most importantly, weapon possession.


Anytime you write about a tragedy and point to your favorite policy reform as the solution, it can seem opportunistic and, frankly, a little callous. But it is not groundless to think that school type could matter, and nothing should be off‐​limits for discussion to end these sorts of tragedies.