Any Budget That Cuts Fed Ed Is Good, But…

The Trump Administration’s proposed U.S. Department of Education budget, released yesterday, is due some props. It would cut spending by about 10 percent from 2019, and kill some bad programs. But there’s also a downside: it would push federal tentacles further toward private schools, and deeper into charters. Which means the lesson still hasn’t been learned: The Constitution gives Washington no authority to govern in education, and that includes advancing ideas the Trump Administration—and I!—like.

Let’s first acknowledge that it takes some guts to cut education department funding, because the average person probably hears “cuts to education” and thinks “oh no, cutting education!” What they should hear is “cutting spending in the name of education, but that often has very dubious educational effects.”

You can look at National Assessment of Educational Progress scores since the early 1970s, as federal intervention ramped up, and observe essentially no improvement for 17-year-olds: 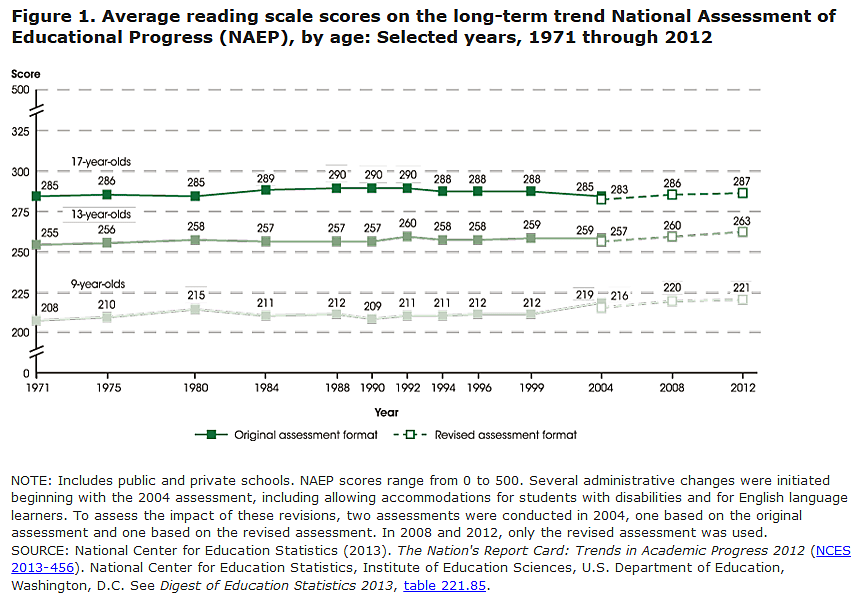 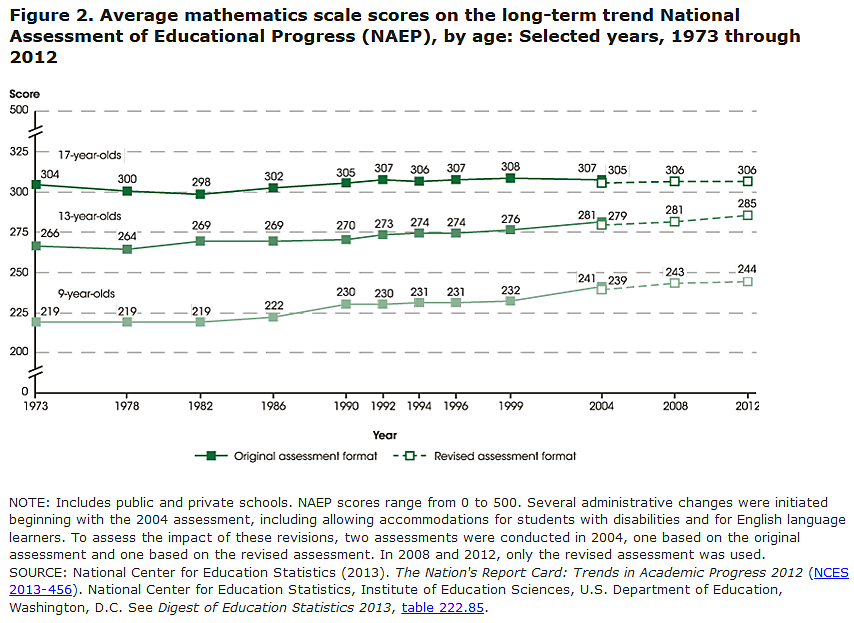 That’s the federal government’s own yardstick showing stagnation, despite real spending from all sources per public K-12 student, and total federal elementary and secondary outlays, more than doubling since 1970. (The massive leap in federal spending in 2009 is the Obama "stimulus.") 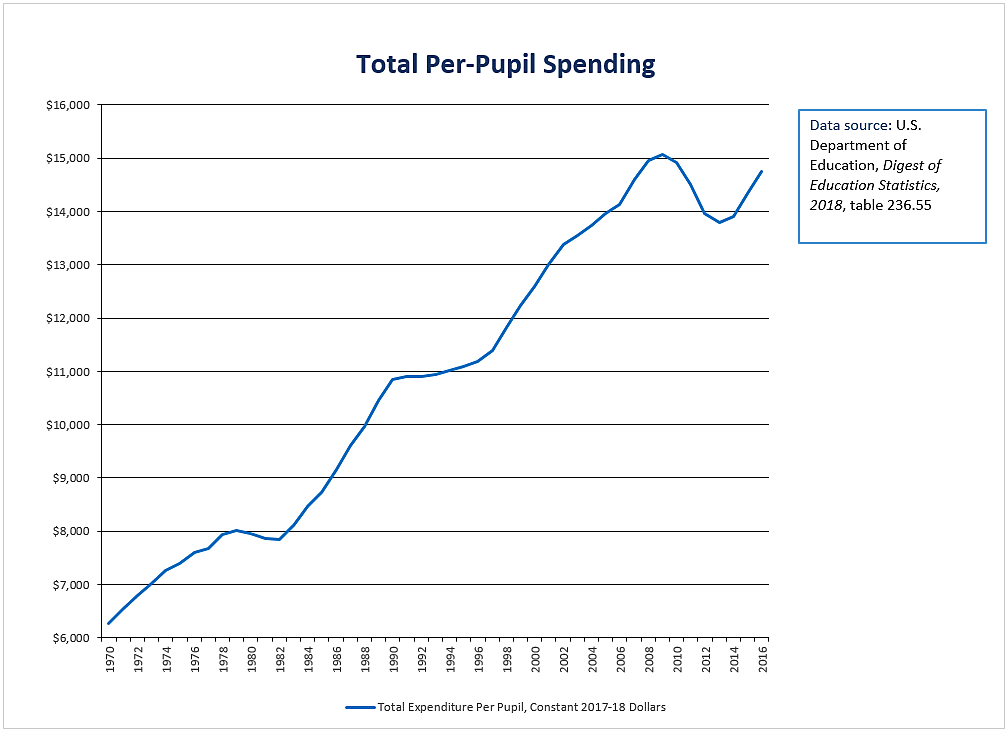 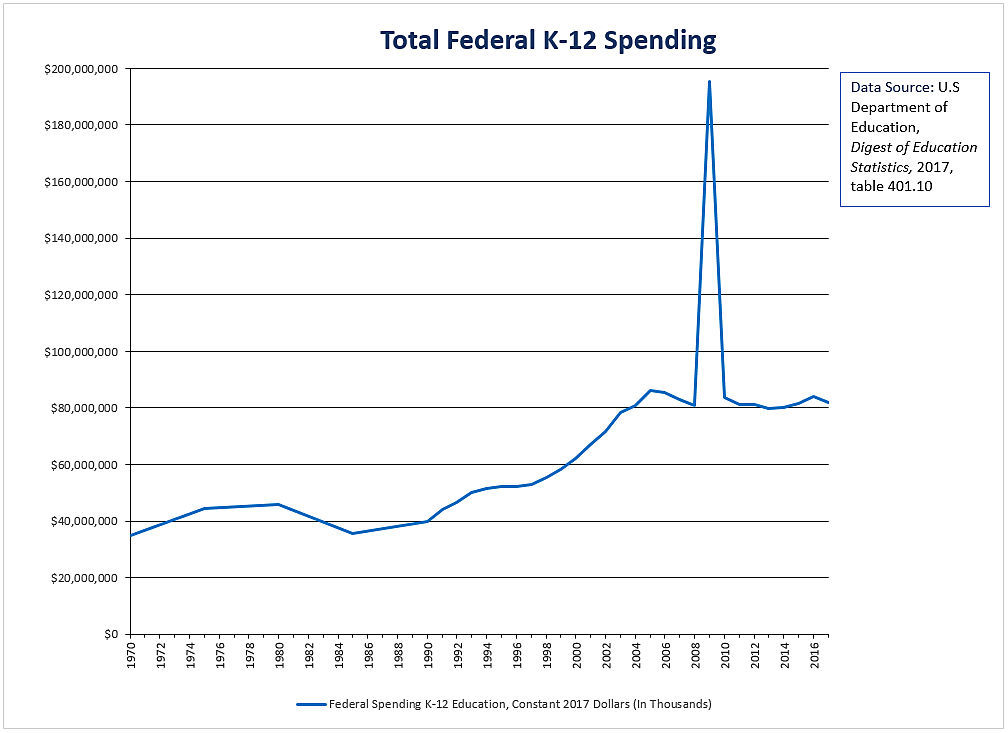 You can also look at the 21st Century Community Learning Centers program, funded to the tune of $1.2 billion for 2019, to see a program for which federal studies find neutral to negative effects. Or you can look at federal student aid programs—including Pell Grants, loans, and loan forgiveness programs that favor Americans working in putatively “nonprofit” jobs—to see hugely counterproductive effects, including rampant tuition inflation, high debt, and the hollowing out of college degrees.

The administration will be bludgeoned with woeful rhetoric for these proposed cuts, but they are the right thing to do.

School choice is also good, but trying to expand it through Washington, as this budget calls for, is wrong, both constitutionally and if we desire maximum choice. As I wrote last week about the Administration’s proposal for a $5 billion scholarship tax credit, “what the feds fund, even indirectly, they inevitably want to control.”

The Administration has tried to blunt this concern, saying that the tax credit is not a program and it leaves it to states to set the rules. But it is clearly a federal initiative intended to push states to do what the Administration wants, i.e., it is federal coercion. Indeed, Secretary of Education Betsy DeVos said as much in the event announcing the effort, which was held at…wait for it…the U.S. Department of Education! She said, “as more states offer more options to families, demand will rise and pressure will mount on those who have not yet embraced the opportunity.” And in case those comments, and holding the launch at the education department, were not evidence enough the credits would be a federal intervention, the budget summary says, “the most transformative education proposal in the President’s Budget Request…is a federal tax credit for voluntary donations to State-designed scholarship programs.”

The budget proposal would also increase spending on charter schools, with grants to charters rising from $440 million to $500 million. Not only is this unconstitutional, it gives the impression that the Administration’s concern is not the proper federal role, but using the feds to fund things it likes. Which means it accepts that ultimately the only limit on federal spending is whatever the people in power decide they don’t want to spend money on.

The budget proposal is trying to do the right things. But it doesn’t reflect a true understanding of the federal role in education: to stay out, including of things that are good.