In the wake of the terrible train crash near Philadelphia, people are asking whether Amtrak budget cuts could have been a contributing factor. The short answer is that federal rail spending has not been cut. The longer answer is that rail spending has been greatly misallocated by Congress. Rather than being spent on maintenance along heavily used corridors (particularly in the Northeast), the federal rail budget has been frittered away on uneconomical rural routes and high-speed rail schemes.

In the federal budget, Amtrak is within the Federal Railroad Administration (FRA). The president estimated that fiscal 2015 outlays on the FRA would be $3.6 billion. Of that, $250 million is for Amtrak operating subsidies, $1.1 billion is for Amtrak capital grants, $1.8 billion is for high-speed rail grants, and the rest is for safety, research, and other rail activities.

The chart shows total FRA outlays from 1990 to 2015 in current dollars (not adjusting for inflation). Outlays have soared in recent years, partly due to rising high-speed rail spending. During 2009 to 2015, high-speed rail grants were $2 million, $16 million, $304 million, $513 million, $768 million, $1.1 billion, and $1.8 billion. But even aside from that spending, FRA outlays were up modestly over the past decade. 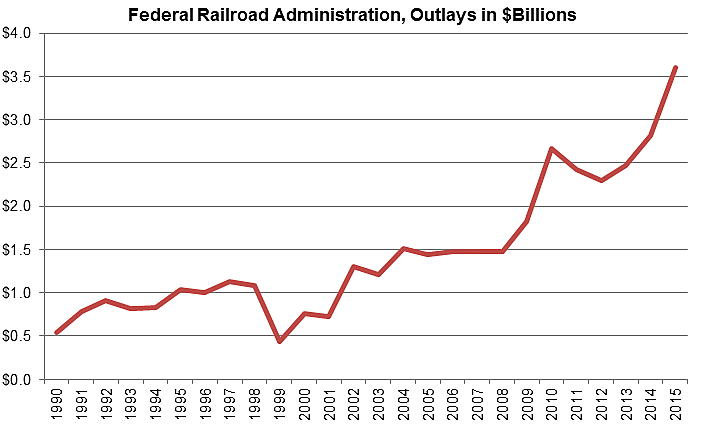 The problem with Amtrak is that many of its routes do not make economic sense. Because of politics, the company is forced to run services through low population regions that have few passengers. Passenger rail makes sense in the Northeast corridor, but few other places in America—at least within today’s costly and unionized rail structure. The distance from Boston to Washington, D.C. is less than 500 miles, yet Amtrak operates a 21,000-mile system through nearly all the states. Money that should be used on maintenance and upgrading in the Northeast is being used on services elsewhere in the country that lose hundreds of dollars per passenger.

Amtrak’s pathologies are described in this essay by Tad DeHaven. The solution is to privatize Amtrak and deregulate passenger rail. Privatization and deregulation worked brilliantly for freight rail, and there is no reason why it could not work for passenger rail. Let’s take government out of passenger rail, and allow America’s entrepreneurs take another crack at it.