After adjusting for inflation, it turns out that median income for families reached a record high in 2015, the last year for which the U.S. Census Bureau has data. Families that include married couples, particularly those where both spouses participate in the labor force, did even better and also saw their incomes break records in 2015. The Census Bureau defines a family as “a group of two people or more … related by birth, marriage, or adoption and residing together.” 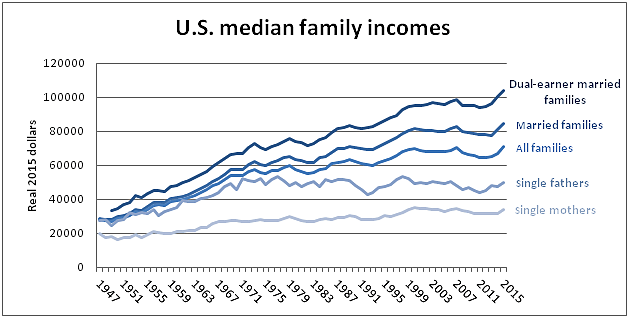 
All family types saw a somewhat notable median income uptick in 2015, allowing each type to outperform pre‐​Great Recession income levels. Of course, some families have done better than others. Families headed by single women (simplified to “single mothers” in the above graph) have seen their incomes rise only slowly, while families headed by single men (“single fathers” in the graph) have seen their incomes essentially stagnate since the 1970s.


However, most families fall into the categories that have made impressive real income gains. 73 percent of family households include married couples, while 19 percent are headed by single women and only 8 percent are headed by single men. Moreover, both spouses now work in over 60 percent of married couple families, placing them in the highest‐​earning category of family.


So despite the popular narrative of economic decline pushed by some politicians and newspeople, the American family is earning more than ever before recorded.