A recent Wall Street Journal piece explored the economic impact of Arizona’s immigration laws based on a Moody’s Analytics report that hasn’t been published yet. The following is an update on some of my earlier work on the economics of Arizona’s two immigration enforcement laws.  The Legal Arizona Workers Act (LAWA) became law in mid-2007 and focused on workplace enforcement by mandating E-Verify for all new hires and the “business death penalty” for habitual violators. Arizona followed up in mid-2010 with SB 1070 which gave the police more power to expand the scope of immigration enforcement. The Supreme Court struck down much of SB 1070 while leaving LAWA intact.

The goal of these laws was to force unlawful immigrants out the state so that natives could get their jobs. LAWA was poorly enforced while the Supreme Court mostly struck down SB 1070. However, the fear and uncertainty caused by these laws did damage Arizona’s economy compared to its neighbors.

Wages for construction workers in Arizona kept pace with wages in surrounding states. They were a little higher in the run up to the housing crisis but quickly fell in 2008 after LAWA became law and only recovered by about 2012 – tracking closely with California which has a much more lenient immigration enforcement policy than Arizona (Chart 2). Neither LAWA nor SB 1070 appear to have improved Arizona wages relative to other states. 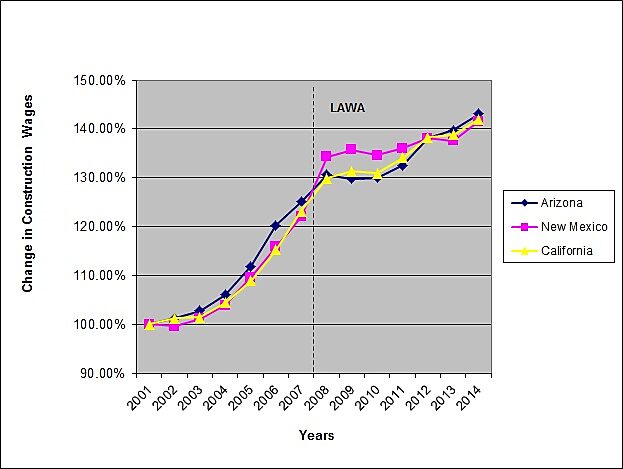 Building construction employment shows a steeper decline in Arizona and a bottoming out worse than in neighboring states (Chart 3). 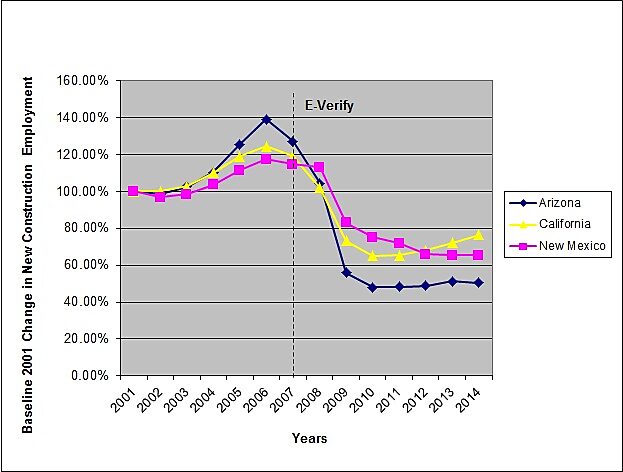 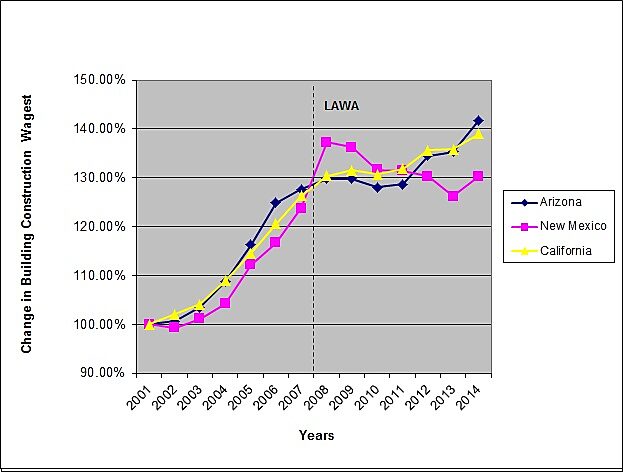 The Arizona’s immigration laws impact on the construction industry is difficult to tease out of the data because their passage coincided with the housing crisis and the Great Recession. Agriculture, on the other hand, would not be much affected by a housing shock but would be greatly disturbed by an immigration enforcement law – which is what the Chart 5 shows. A small note before proceeding, agriculture is seasonal and 2015 data is available only for the first three quarters so the following charts only go up through the end of 2014. Agricultural employment crashed in Arizona around the time LAWA was passed but actually increased in Nevada and California. New Mexico shows a similar decline. 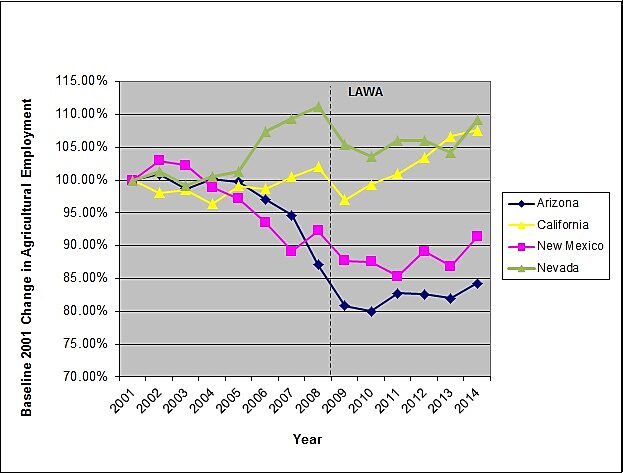 Wages for all agricultural workers grew steadily throughout the whole period but more rapidly before LAWA and SB 1070 became law (Chart 6). 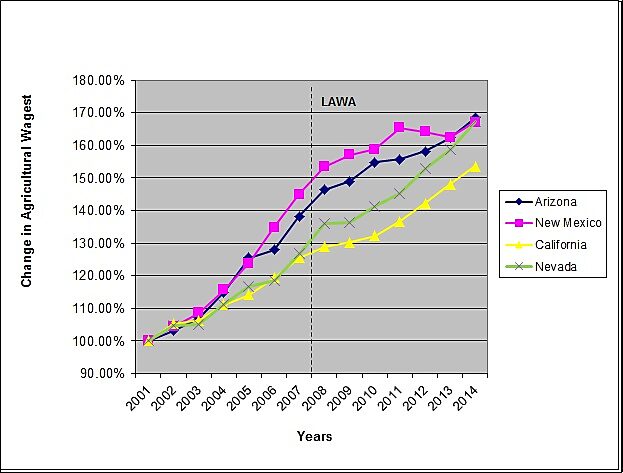 The crop production employment figures through 2014 show a substantial difference between Arizona and its neighbors (Chart 7). Native Americans did not fill the gaps left by unauthorized immigrants who fled Arizona – they just took their jobs with them. I had to chop off the first three months of 2015 because crop production is seasonal. This sector was already suffering before LAWA and SB 1070.

Around half of hired workers in crop agriculture are unauthorized immigrants because the H-2A visa is too costly for most farmers. Labor is a particular important factor input for fruits, vegetables, and nursey plants which is where unauthorized immigrants are concentrated. Dairy farms and slaughterhouses also rely heavily on them because there are no visa categories for workers in year-round food production but those aren’t big industries in the Southwest. 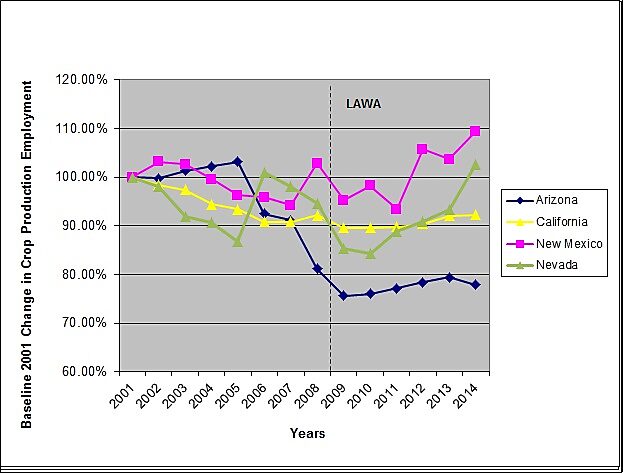 Wages in crop production are pretty closely correlated with the other states (Chart 8). 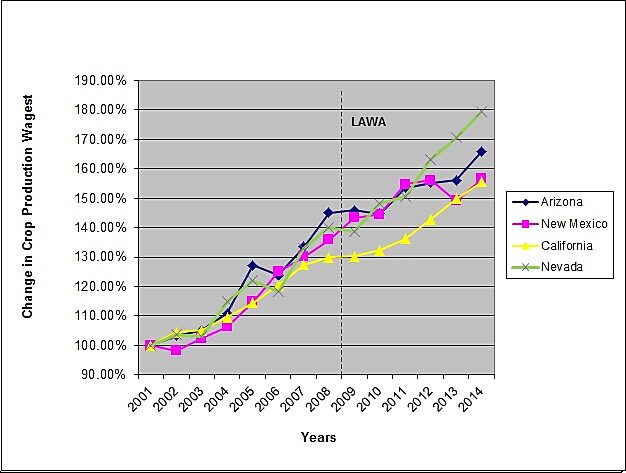 In conclusion, supporters of the Arizona immigration laws should admit that they did not contribute to job growth for natives. On the other hand, opponents of the laws (myself included) overstated the potential economic harm from them. I expected Arizona’s immigration laws to be far better enforced than they were and to withstand constitutional scrutiny – neither of which happened. None of this is meant to diminish the harms from violated civil liberties or other problems that have arisen in Arizona.

LAWA’s E-Verify mandate has not been enforced.  Only about 57 percent of new hires in 2014 were run through E-Verify despite the law’s universal mandate. The business death penalty has only been enforced three times.  Most of SB 1070 was struck down. The reputational harm to Arizona’s business climate was real but that was minor compared to damage that would have occurred by fully enforcing LAWA and SB 1070. If the Arizona state government is unwilling or unable to enforce immigration enforcement laws there is little hope that the federal government will do so.