In Afghanistan, the Withdrawal of U.S. Troops Is Long Overdue

Donald Trump announced a mini-surge of U.S. forces into Afghanistan a month ago. This week the Long War Journal reported the Taliban now control or contest 45 percent of Afghanistan’s districts, up from 40 percent three months prior, which was an increase from 34 percent a year earlier, and you get the idea. The Taliban control more territory today than at any point since 2001, and they have the momentum.

Sixteen years after invading Afghanistan, toppling the Taliban, and routing Al Qaeda elements there, U.S. goals remain as far out of reach as ever.

However, rather than surge additional forces and fall victim to the “sunk cost” fallacy, the U.S. should withdraw military forces and re-align objectives to the threat and national interests. During his August speech, Donald Trump defended the surge by saying, “our nation must seek an honorable and enduring outcome worthy of the tremendous sacrifices that have been made, especially the sacrifices of lives.” His emotional appeal implied that grieving Gold Star families should be the nation’s impetus for continued involvement in the Afghan war (which would also lead to more families who would experience that ultimate loss).

Instead of defending a surge on the basis of efforts already spent, U.S. policy towards Afghanistan should rely on the 16 years of data available since initiation of the war on terror. All of that data strongly communicates two points: 1) the terror threat to Americans remains low and 2) a strategy that emphasizes military power will continue to fail.

The terror threat to Americans remains low as compared to virtually all other threats. Islamist-inspired terrorists have conducted less than one attack per year over the past three decades. In each of those 30 years, though, “regular” Americans murdered between 15,000 and 20,000 of their fellow Americans. Even the horrible attacks of 9/11 represented just a fraction of the Americans murdered that year.

Quite likely, the memory of 9/11 continues to inflate the terror threat, yet September 11th was an outlier. The world never experienced a similar attack prior or since, and for good reason: significant terror attacks almost always take place in failed or war-torn states. America’s second worst attack occurred in 1995, when Timothy McVeigh killed 168 in Oklahoma City. And few Americans can probably even identify North America’s second worst attack. It took place in 1985 on an Air India flight from Toronto, Canada. Three hundred and twenty-nine died at the hands of Sikh extremists.

In 2001, our homeland security was much different than it is today. The 9/11 hijackers received their pilot training in plain sight. They entered the country legally, using their real names. One lived with his flight instructors, and two even argued their way back into the country by assuring border and customs agents that they were, in fact, students—pilot training students—authorized to be here.

If save havens are a concern, the most important one has been eliminated. Even though terrorists may seek to harm Americans, post-9/11 homeland security efforts have severely reduced their opportunity.

America’s overseas war on terror, though, has not made Americans more secure. Instead, the number of Islamist-inspired terror groups and terrorists has grown substantially. In 2001, the Department of State identified Al Qaeda and 12 other similar groups. Today, that list includes ISIS, Al Qaeda, and another 42 like-minded organizations.

The proliferation of terror groups, terrorists, and attacks appears to have only occurred in response to U.S. military action. As the chart below suggests, terror activity spiked after the U.S. initiated its war on terror in those seven countries, not before. 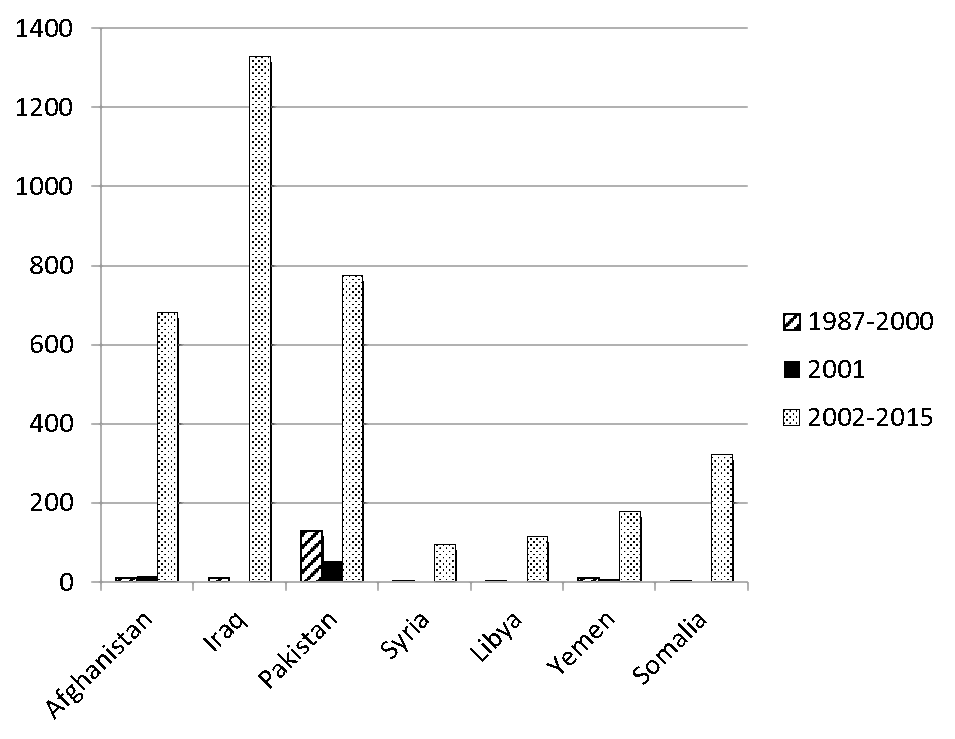 And the research supports the point: militaries rarely defeat terror groups. Scholars such as Audrey Kurth Cronin, Seth Jones, and Martin Libicki have concluded that instead of military defeat, most terror groups end by entering the political process, being marginalized, or through active policing. Each of those three options represents a line of operation that the U.S. has little control over.

Despite 16 years of assistance, Afghanistan’s government remains more corrupt than 96 percent of all countries, and its security force of 382,000 cannot halt Taliban gains. As Trevor Thrall and I concluded in a recent policy analysis, it’s time for America to “step back.” Eventually the Afghan government will decide whether competency and transparency matter enough, and Afghans will determine whether the Taliban ends by entering the political process, becoming irrelevant, or at the hands of a capable police force. Until then, the U.S. cannot do it for them.

Please join us October 10th as Cato hosts a policy forum on the future of U.S. strategy in Afghanistan. Stephen Biddle of George Washington University, Michael O’Hanlon of Brookings, and I will debate the merits of the primary options: surge, negotiate, and withdraw, and a young Army officer with two deployments to Afghanistan will open the forum with his “boots on the ground” perspective. Register here.