On Monday Aetna announced that it will significantly reduce the scope of its participation in the Affordable Care Act’s health insurance exchanges, pulling out of 11 of its 15 states. The company will only continue offering exchange plans in Delaware, Iowa, Nebraska, and Virginia. In the related press release, Aetna Chairman and CEO Mark T. Bertolini pointed to the sizable losses the company had incurred through its business on the exchanges: $200 million in pretax losses in the second quarter and $430 million total since January 2014. Aetna covered almost 850,000 people through its exchange plans as of June 30th, and most of those people will have to find new plans in the next open enrollment, and these customers the latest group to find out first hand that “if you like your plan you can keep it” was not actually a guarantee. 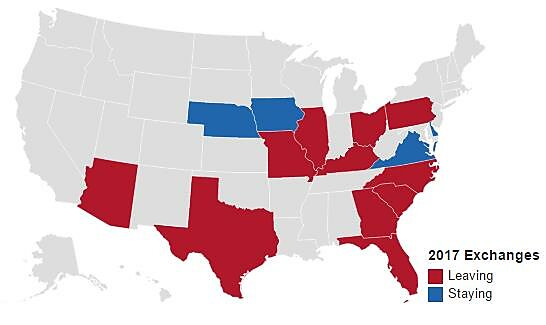 Aetna is not the only insurer scaling back its participation, and their announcement references “more than 40 payers of various sizes have similarly chosen to stop selling plans in one or more ratings areas in the individual public exchanges.” Major insurers Humana and UnitedHealthcare had previously signaled that they would exit most exchanges, and Anthem and Cigna have both indicated that they are struggling with increasing costs and mounting losses.

This reduced insurer participation could cause people in many counties to have few choices and no real competition when it comes to shopping on the exchanges. One report from the Kaiser Family Foundation estimates that the number of counties with a single insurer offering products on their ACA exchanges surged from 225 counties in 2016 to 664 counties in 2017, and that does not incorporate the Aetna pullback or any other issuers subsequently deciding to scale back their involvement. The final number of counties with only on issuer on their exchange will ultimately be much higher.

In rarer instances, even one issuer might seem like a luxury. As of now, Pinal County in Arizona has zero insurers offering plans through the exchange for 2017.

Many insurers that will continue offering plans have requested considerable premium increases for the 2017 open enrollment in an attempt to staunch the bleeding on their exchange losses. One source estimates a weighted average requested hike of 23.3 percent across all 50 states and D.C. While the final approved rate increases might be slightly less, premiums are going up significantly in most states. It is troubling for the law’s prospects that so many major insurers were unable to avoid losses of this magnitude on the exchange even with an individual mandate that penalizes the uninsured for failing to buy insurance and substantial subsidies for the majority of enrollees.

Prior to the rollout in 2014, the administration and the Department of Health and Human Services made a concerted effort to rebrand the exchanges as “marketplaces” in an effort to emphasize the role competition and choice they hoped would play a role. There are a multitude of reasons the ACA exchanges are not real marketplaces, from restrictions on how much they can vary premiums to mandates on what benefits must be included, but even aside from those caveats, can they really be called marketplaces if no one is willing to sell on them? The current situation is a far cry from what President Obama promised when he described “marketplaces” that would deliver “more choices, more competition, and in many cases, lower prices.”