Is the Administration Cooking the Books on Govt’s Share of Health Spending?

Today, the federal agency that runs Medicare and Medicaid released its estimates of national health expenditures in 2009.  Interestingly, the U.S. Centers for Medicare & Medicaid Services re-categorized about 6 percent of national health expenditures -- well over $100 billion -- from “government” to “private,” at the very moment that the government share of NHE appeared set to hit 50 percent.

Last year, CMS projected that government health spending would "account for more than half of all U.S. health care spending by 2012."  But it looks like we were set to reach (have reached?) that milestone much sooner.  See the below table, which I made using CMS's estimates from 2008 and Exhibit 5 (p. 16) from today's report. 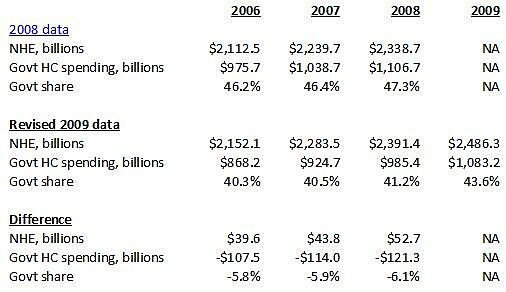 Turns out, it was the private sector spending that $100 billion each year, not the government.  Who knew?

This 6-percentage-point drop in government's share of health spending was apparently due to “the renaming of some service and payer categories."  A footnote leads to a page on the CMS site that isn't active yet, so we can't see what was recategorized from government to private spending.

And the feds are the guys who say they're going to control health care costs!

I can’t say for sure that there’s something fishy going on here.  But this re-categorization comes at an awfully convenient time for an administration struggling with public dissatisfaction over its, ahem, government takeover of health care.  My spidey sense is tingling.