Presidential candidate Bernie Sanders got into hot water this week with his celebration of Cuban dictator Fidel Castro’s seemingly wonderful literacy efforts. Setting aside for a moment how Castro used literacy, let’s look at the stats.

Below is a chart of literacy rates in Cuba starting in 1900, with data from numerous sources. What you see is growing literacy in the relatively prosperous country until it flattens, and even dips, between 1950 and 1960. It is unclear why the dip occurred—maybe political instability, emigration, or war—but we then see a big spike between 1960 and 1962, which is presumably from Castro’s “year of education.” The rate, however, drops soon after the 96 percent that Castro claimed to hit (that figure is not apparently in data collections such as the CIA World Factbook and World Development Index) and the trajectory basically returns to what it was pre‐​revolution. 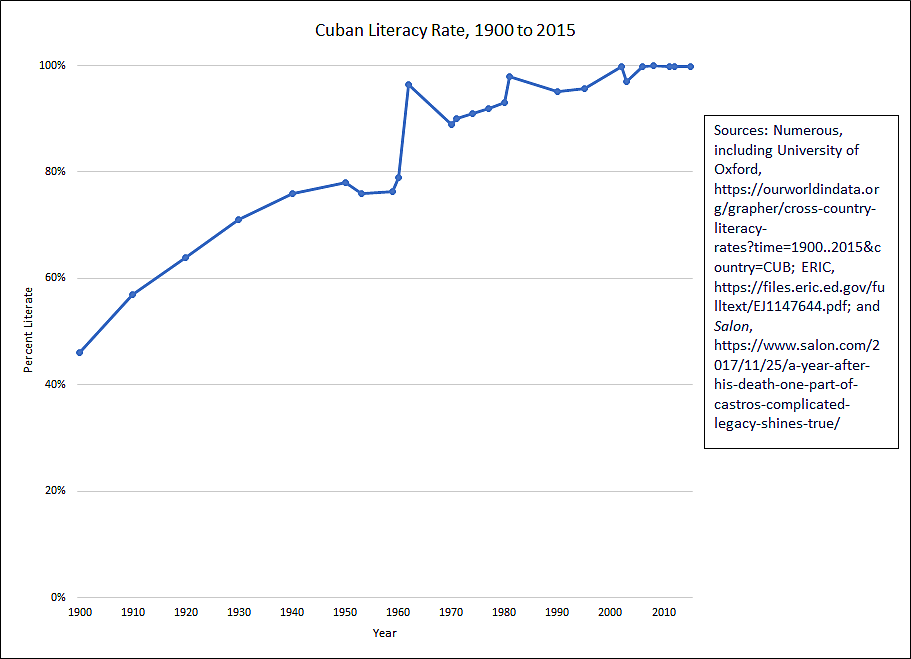 What happened? Perhaps the spike was illusory, manufactured by the Castro regime to suggest grand progress. Or maybe many of the lessons didn’t stick after the big surge. Regardless, after the spike literacy growth more or less returned to its trajectory before the 1950s lull.

Are there broader lessons here?

It is, of course, in the interest of dictators to promote government education, which is a vehicle ideally suited to indoctrination. Widespread literacy is especially terrific if all that the people are allowed to read is what the government approves, which is exactly what we saw in Cuba.

That said, no matter what dictators—or other governments—do, there is abundant evidence that people want to learn how to read, and will seek out literacy on their own. Cubans were clearly pursuing literacy before Castro. Similarly, in colonial America and the early United States, literacy was widespread long before public schooling was: roughly 90 percent of white adults were literate by 1840. Of course, some governments in the United States forbid literacy for slaves, because in an otherwise free country reading was a gateway to demanding liberty.

There is no meaningful evidence that the spread of literacy in Cuba needed Castro. Indeed, we’d probably all be better off with no government control of education.