The abuse and overspending in government disability programs is so bad that even National Public Radio and 60 Minutes have taken notice. On the heels of this excellent NPR examination of the “disability industrial complex,” the venerable CBS news show last night profiled Senator Tom Coburn’s efforts to uncover fraud in the two big federal disability programs.


The combined spending on Social Security Disability Insurance (SSDI) and Supplemental Security Income (SSI) has risen to a huge $200 billion a year, so kudos to the mainstream media for sounding the alarm on these programs. What we need now is for other fiscal conservatives on Capitol Hill to stand with Senator Coburn and demand reforms.


There appear to be millions of people on the disability programs whose ailments are not actually severe enough to warrant coverage or who are outright scamming the system. On 60 Minutes, Senator Coburn guessed that one‐​quarter or more of the people currently on the disability programs shouldn’t be. The following chart (sourced here) from Tad DeHaven supports Coburn’s assessment: 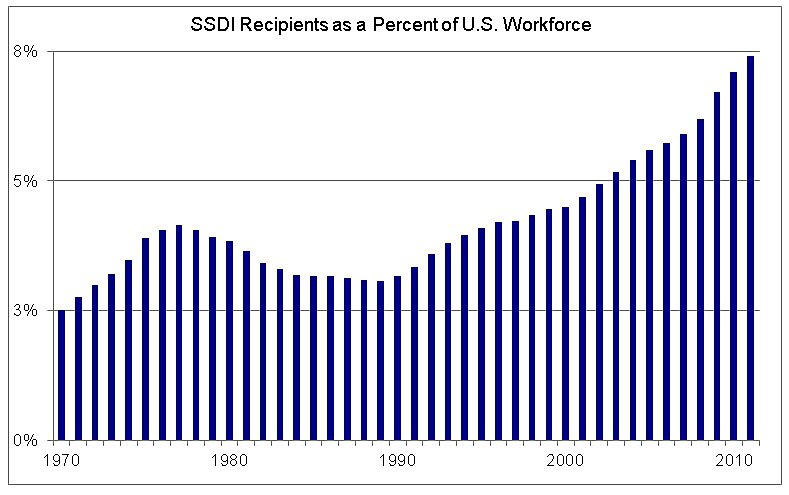 During the 1970s and 1980s, the ratio of people on SSDI to the U.S. workforce averaged 3.4 percent. That ratio has now more than doubled to 7.4 percent, even though the actual rate of disability among the working‐​age population is thought not to have increased in recent decades.


The following chart illustrates the problem from another angle. It uses data compiled by Jagadeesh Gokhale from the Current Population Survey on men aged 20 to 59 with a work‐​limiting health problem. Within this group, a falling share are working and a rising share are going on SSDI and not working. 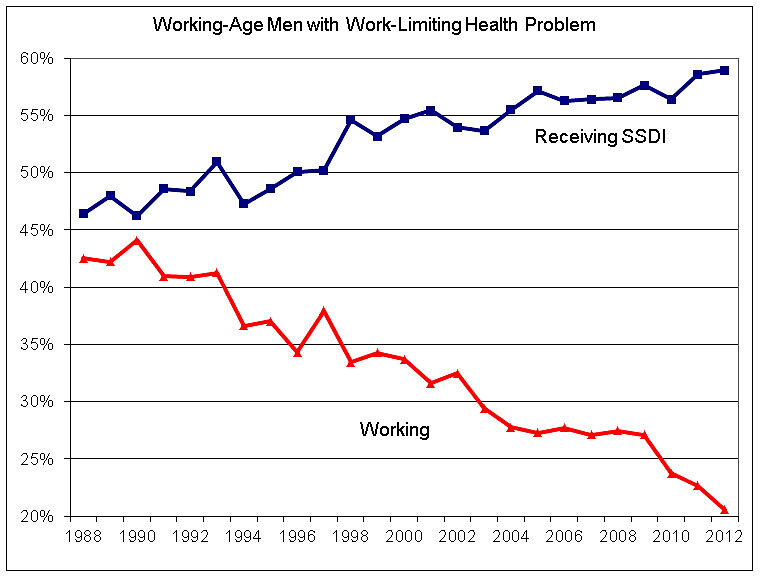 As DeHaven explains in his recent reports on SSDI and SSI, the rapid growth in these programs is very troubling, and not just because of the rising taxpayer costs. The programs are apparently inducing many people who could be using their skills productively in the economy to instead drop out and go on the federal dole.


All government subsidy programs undermine individual responsibility and induce unproductive behaviors. This is true, for example, of the roughly $30 billion in annual federal subsidies for farm businesses. Each year federal disability programs pump out six times more benefits than farm subsidies, so it wouldn’t be surprising if the distortions and economic harm created is far larger.