What would life be like without exchange or trade? Recently, a man decided to make a sandwich from scratch. He grew the vegetables, gathered salt from seawater, milked a cow, turned the milk into cheese, pickled a cucumber in a jar, ground his own flour from wheat to make the bread, collected his own honey, and personally killed a chicken for its meat. This month, he published the results of his endeavor in an enlightening video: making a sandwich entirely by himself cost him 6 months of his life and set him back $1,500.

(It should be noted that he used air transportation to get to the ocean to gather salt. If he had taken it upon himself to learn to build and fly a plane, then his endeavor would have proved impossible).

The inefficiency of making even something as humble as a sandwich by oneself, without the benefits of market exchange, is simply mind-boggling. There was a time when everyone grew their own food and made their own clothes.  It was a time of unimaginable poverty and labor without rest.

The greater the number of people involved in exchange, the more beneficial the process becomes. This morning, thanks to international trade, I am drinking coffee grown in Latin America, viewing a computer screen with eyeglasses made in Europe, and typing this blog post on a keyboard made in Asia. Fortunately, freedom to trade internationally has improved, on average, around the world. Increased trade has helped raise living standards and decrease global poverty. 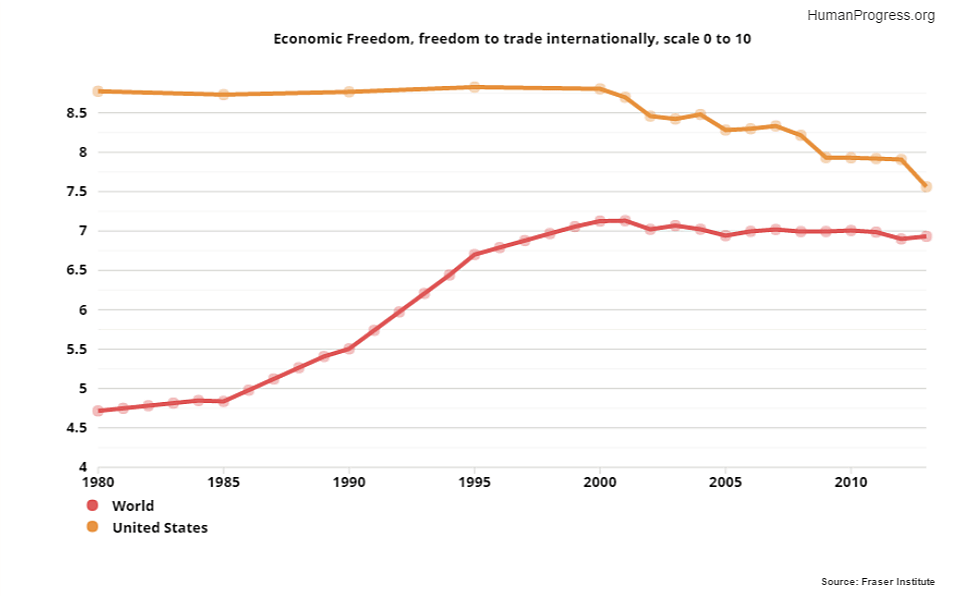 However, the recent trend in the United States is less positive. If trade protectionist politicians, like Bernie Sanders on the left and Donald Trump on the right, have their way, then U.S. freedom to trade internationally may deteriorate further. They put down trade by claiming that it harms the U.S. economy and destroys jobs. Yet, there is a widespread agreement among economists that free trade is key to prosperity. (Learn more about the relationship between increased trade and jobs here).

This morning, as you drink your coffee, take a moment to consider where it comes from. You probably would not be drinking it right now if it were not for trade. This video elegantly draws attention to the myriad ways in which the exchange of goods and services across national borders touches lives and helps raise living standards. Almost everything you use is the product of a complex web of human cooperation, often extending beyond your country. Even something as simple as a bag of groceries or a pencil is the end result of a “symphony of human activity that spans the globe.”

How do other countries compare on freedom to trade internationally? Explore the data and find out.