Mr. Chairman, thank you for this opportunity to express my views on “Venezuela’s Tragic Meltdown.” A great deal of the commentary on the topic is polemical, and more‐​or‐​less political and ideological self‐​justifications of one sort or another. In consequence, the discourse is often confused and confusing. In an attempt to bring some clarity to the topic, I will focus on the one necessary condition that must be satisfied before the Venezuelan economy can be turned around. Inflation must be stopped before stability can be established. Stability might not be everything, but everything is nothing without stability.

Venezuela's economy, today, resembles that of the former Soviet Union before it collapsed. Venezuela has the largest proven oil reserves in the world, and not surprisingly produces one major product, oil.  Oil production is carried out by a state-owned oil company, Petróleos de Venezuela, S.A. (PDVSA). PDVSA is so poorly run and its proven oil reserves are exploited so slowly as to render the value of its reserves worthless (Hanke, 2017). Venezuela's economy is also burdened by socialist-interventionist structure (Hanke and Yin, 2017). In consequence, economic life is heavily politicized and very uncertain.

Venezuela's economy is collapsing. This is the result of years of socialism, incompetence, and corruption, among other things. An important element that mirrors the economy's collapse is Venezuela's currency, the bolivar. It is not trustworthy. Venezuela's exchange rate regime provides no discipline. It only produces instability and poverty. Currently, Venezuela is experiencing one of the highest inflation rates in the world: 150% per year.

In 1999, Hugo Chavez was installed as president. It was then that the socialist seeds of Venezuela's meltdown started to be planted. As the seeds sprouted, Venezuela began to enter what has become a death spiral. For a most edifying read — one that gives a real feel for the bizarre state of economic affairs in Venezuela — I recommend Raul Gallegos' book: Crude Nation: How Oil Riches Ruined Venezuela (Gallegos, 2016).

To put Venezuela on a sound, sustained economic path will require massive economic reforms. Sound economies require sound institutions, even in oil-rich countries (Kaznacheev, 2017). Venezuela, like the former Soviet Union, has none. So, the task ahead will be great. But, as we learned in the communist countries of the former Soviet Union, inflation had to be snuffed out and economic stability established before successful economic reforms could be introduced.

Venezuela suffered from an unstable currency and elevated inflation rates before the arrival of President Hugo Chavez, but with his ascendancy, fiscal and monetary discipline further deteriorated and inflation ratcheted up. By the time President Nicolas Maduro arrived in early 2013, inflation was in triple digits and rising.

The most important price in an economy is the exchange rate between the local currency and the world's reserve currency — the U.S. dollar. As long as there is an active black market (read: free market) for currency and the black market data are available, changes in the black market exchange rate can be reliably transformed into accurate estimates of countrywide inflation rates. The economic principle of Purchasing Power Parity (PPP) allows for this transformation and the accurate estimates of countrywide inflation rates (Hanke and Bushnell, 2016).

Venezuela employs a multiple exchange-rate regime, coupled with exchange controls.  In consequence, the official exchange rates are not free-market rates. To obtain the free-market exchange rates required for the application of PPP, we use black-market exchange rates. Black-market rates are efficient processors of information when political and economic circumstances make the official exchange rate unreliable or irrelevant. The course of the bolivar-U.S. dollar (VEF/USD) black-market rate is shown in the chart below. The value of the bolivar against the dollar has plunged, and with that, PPP suggests that Venezuela has experienced a dramatic inflation surge. And it has. 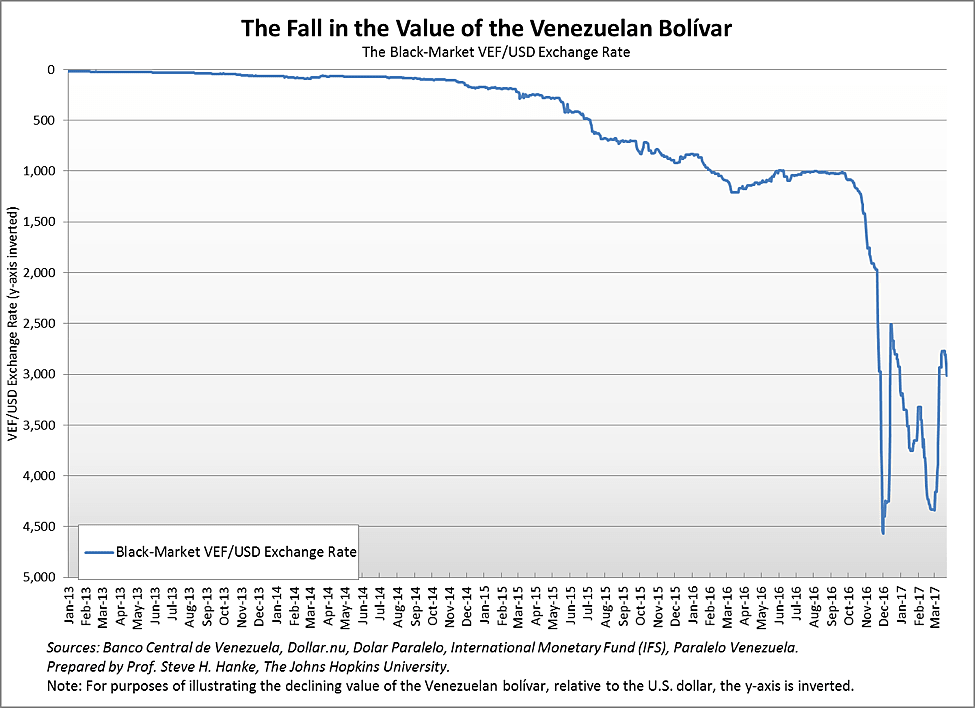 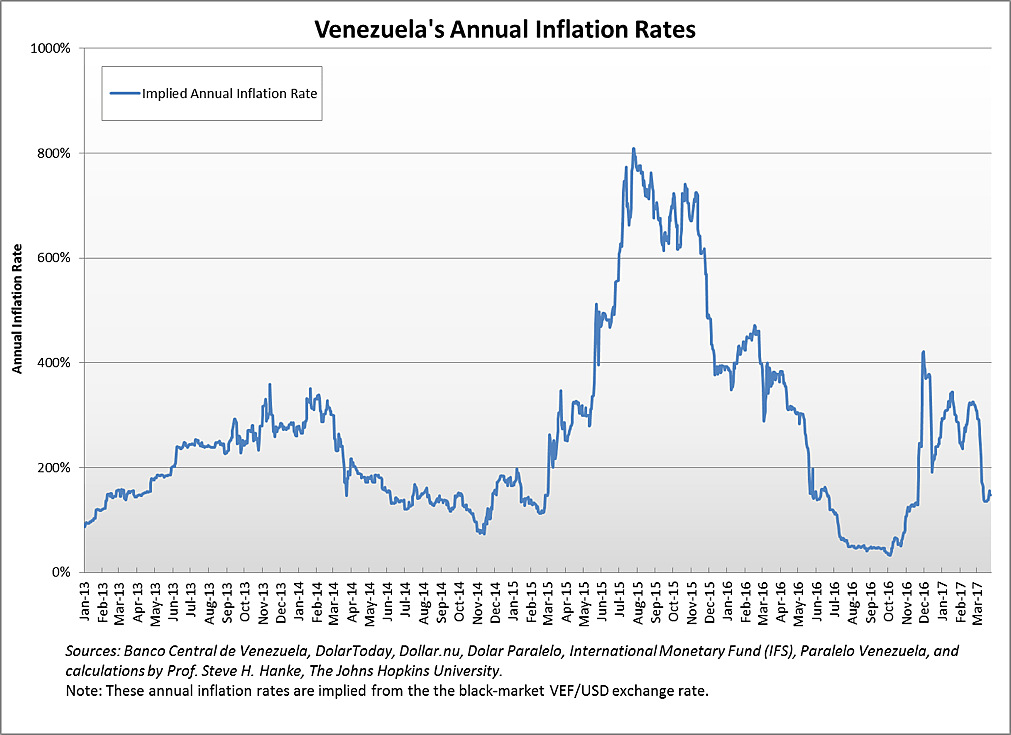 It is worth mentioning that a bit later, in December 2016, Venezuela's inflation became the 57th official, verified episode of hyperinflation and was added to the Hanke-Krus World Hyperinflation Table, which is contained in the authoritative Routledge Handbook of Major Events in Economic History (2013).

ON HOW TO STOP INFLATION AND ESTABLISH STABILITY

There are two proven ways to stop "high" inflations and establish stability. A country can install a currency board system in which its local currency becomes a clone of a reliable anchor currency. Alternatively, a country can abandon its local currency and adopt a reliable foreign currency (read: it can "dollarize"). I designed and implemented both currency board and "dollarized" systems in Latin America, the Baltics, and the Balkans (Hanke, 2016; Santos, 2015). I can attest to the fact that these currency reforms always work to stop inflation in its tracks and establish the stable conditions necessary to carry out economic reforms.

So just what is a currency board? An orthodox currency board issues notes and coins convertible on demand into a foreign anchor currency at a fixed rate of exchange. As reserves, it holds low-risk, interest-bearing bonds denominated in the anchor currency, and typically some gold. The reserve levels (both floors and ceilings) are set by law and are equal to 100%, or slightly more, of its monetary liabilities (notes, coins, and if permitted, deposits). A currency board's convertibility and foreign reserve cover requirements do not extend to deposits at commercial banks or to any other financial assets. A currency board generates profits from the difference between the interest it earns on its reserve assets and the expense of maintaining its liabilities (Hanke and Schuler, 2015).

Several features of currency boards merit further elaboration. A currency board's balance sheet only contains foreign assets, which are set at a required level (or a tight range). If domestic assets are on the balance sheet, they are frozen. In consequence, a currency board cannot engage in the sterilization of foreign currency inflows or neutralization of outflows.

A second currency board feature that warrants attention is its inability to issue credit. A currency board cannot act as a lender of last resort or extend credit to the banking system. It also cannot make loans to the fiscal authorities and state-owned enterprises. In consequence, a currency board imposes a hard budget constraint and discipline on the economy.

A currency board requires no preconditions for monetary reform and can be installed rapidly. Government finances, state-owned enterprises, and trade need not be already reformed for a currency board to begin to issue currency.

It is important to stress, particularly at these hearings, that the currency board idea became engulfed in controversy, thanks to Argentina. What Argentina termed "Convertibility" was introduced in April 1991 to stop inflation, which it did. The system had certain features of a currency board: a fixed exchange rate, full convertibility, and a minimum reserve cover for the peso of 100% of its anchor currency, the U.S. dollar. However, it had two major features which disqualified it from being an orthodox currency board. It had no ceiling on the amount of foreign assets held at the central bank relative to the central bank's monetary liabilities. So, the central bank could engage in sterilization and neutralization activities, which it did. In addition, it could hold and alter the level of domestic assets on its balance sheet. So, Argentina's monetary authority could engage in discretionary monetary policy, and it did so aggressively.

Because of these flaws, I penned an article which appeared in the Wall Street Journal shortly after the introduction of Convertibility. In that article, I concluded that, unless Argentina adopted orthodoxy and amended the Convertibility law, the system would eventually collapse (Hanke, 1991). 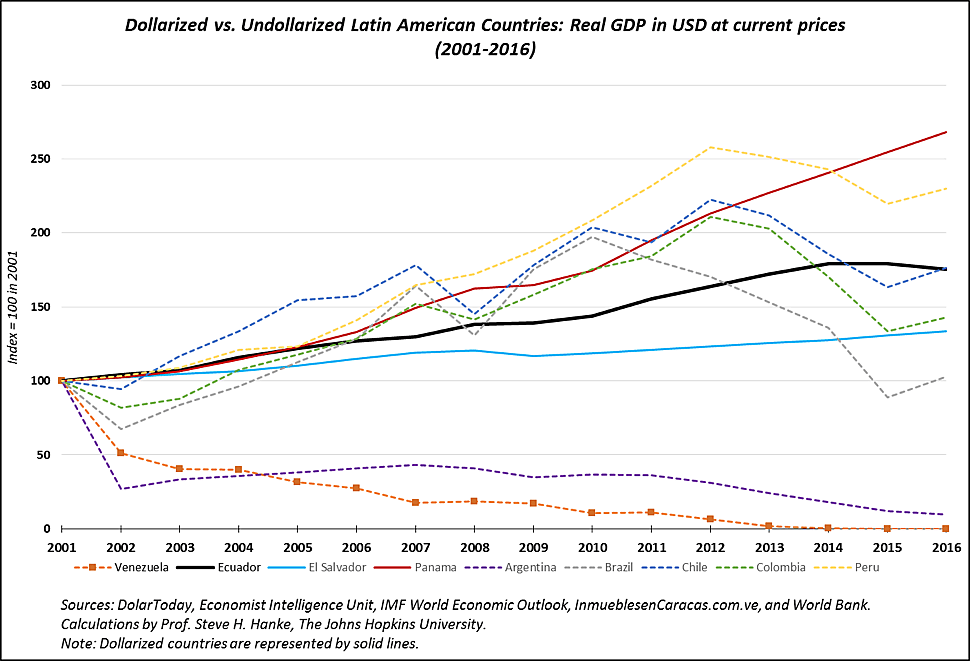 The meltdown of Venezuela's economy is tragic and of Venezuela's own making. What to do? The U.S. government should avoid meddling directly in Venezuela's affairs. Forget the regime change mantra that has long been popular in certain circles within Washington, D.C. Proactive U.S. regime change policies have a long record of ending badly (Kinzer, 2013; Hanke, 2011; Hanke and Hanke, 2011).

So, should the U.S. adopt a "do nothing" policy towards Venezuela? No. The U.S. has international obligations. For example, the U.S. is a member of the Organisation of American States and the United Nations. These organizations, and others, provide an avenue for the U.S. to be engaged in the Venezuelan meltdown.

In addition, specific actions to address Venezuela's immediate inflation problem can be taken. These actions could encourage either the establishment of a currency board system or the adoption of dollarization. For example, in 1992, I worked with the leader of the U.S. Senate, Bob Dole, and Senators Steve Symms and Phil Gramm to draft U.S. legislation that would allow countries to use part of the U.S.'s quota contribution to the IMF for the establishment of currency boards. This legislation, (HR-5368, Law no. 102-391), was signed into law on October 6, 1992.

As for dollarization, it also has a U.S.-friendly history. For example, Senator Connie Mack worked tirelessly to promote dollarization and sound-money policies when he chaired the Joint Economic Committee of Congress (Schuler, 2000; Schuler and Stein, 2000).

It is gestures such as these that will provide the political opposition the courage to propose the only proven solutions to Venezuela's inflation problem — solutions that would immediately stop Venezuela's meltdown.

In closing, it is encouraging that a recent survey in Venezuela concluded that the public supports both currency boards (59% approve) and dollarization (62% approve). Even a large portion of those who support the current government don't support the central bank (50%) and want change, with 43% favoring a currency board and 31% favoring dollarization (DatinCorp, 2017).

Hanke, Steve H. "Remembrances of a Currency Reformer: Some Notes and Sketches from the Field" The Johns Hopkins Institute for Applied Economics, Global Health, and the Study of Business Enterprise, Studies in Applied Economics working paper no. 55. June 2016.