Deaths from drug overdoses have steadily increased over the past 15 years and are now at epidemic levels. Figure 1 shows that the national death rate (deaths/100,000) for drug poisonings doubled from 1999 to 2014. Economists Anne Case and Angus Deaton argue that this increase was an important contributor to the unprecedented rise in all‐​cause mortality for middle‐​age non‐​Hispanic whites. As seen in the figure, the rise in deaths involving heroin or opioids can account for 75 percent of the overall increase in deaths from drug poisonings.

Opioids are narcotic pain relievers and are available, legally, only by prescription. When used as directed, they are an important element of fighting acute and chronic pain. Starting in the mid-1990s, medical groups argued that there was an epidemic of untreated pain, and they urged greater use of opioid pain medicines, especially for those with chronic conditions. The efforts changed prescribing practices considerably. Between 1991 and 2013, opioid prescriptions increased threefold. Opioids are addictive, and as their everyday use increased, so did abuse rates. The National Survey on Drug Use and Health estimates that in 2014, 4.3 million people age 12 and older used pain medicines nonmedically.

We argue that the rapid rise in the heroin death rate since 2010 is largely due to the reformulation of OxyContin, an opioid introduced in 1996. OxyContin became popular for recreational use and abuse because the drug offered much more of the active ingredient, oxycodone, than other prescription opioids, and because the pills could easily be manipulated to access the entire store of the active ingredient. In early August 2010, the makers of OxyContin, Purdue Pharma, took the existing drug off the market and replaced it with an abusedeterrent formulation (ADF) that made it difficult to abuse the drug in this fashion. This change made the drug far less appealing to opioid abusers and led many to shift to a readily available and cheaper substitute, heroin. 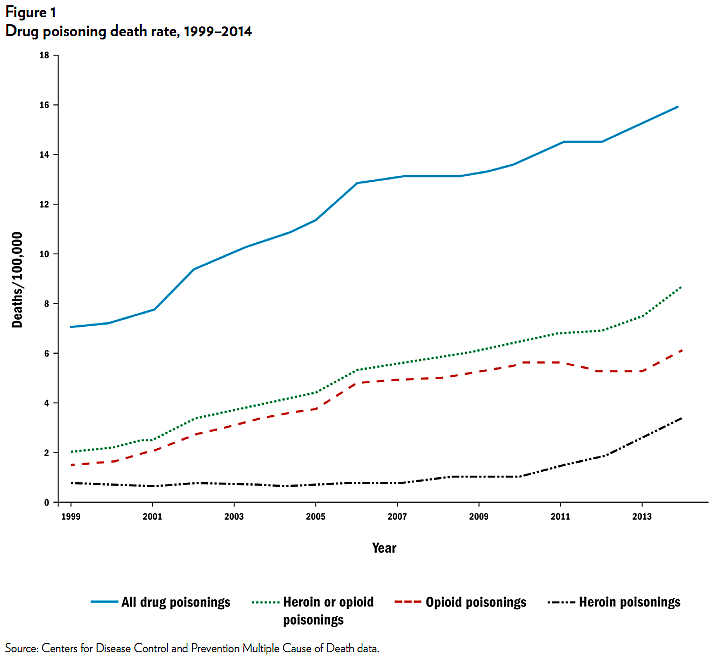 A large body of literature in the medical and public health fields has demonstrated that opioid abuse rates in general, and OxyContin abuse rates in particular, have declined since reformulation. Most of this work suggests that outcomes such as OxyContin prescriptions, deaths from opioids, fatalities reported to the makers of OxyContin, calls to poison control centers for opioids, and entrance into opioid treatment programs all have flatlined since the third quarter of 2010. At the same time, an equally large body of literature suggests there was a shift to heroin toward the end of 2010. These papers point to evidence like that in our Figure 1 or analyze data from surveys of opioid users who have entered substance abuse treatment facilities.

Our work begins with these findings and pinpoints the timing of the changes to the reformulation of OxyContin. Our analysis estimates the most likely month in which a trend break occurred. For the heroin death rate, this is the month immediately following the OxyContin reformulation. A number of national time series — including shipments of oxycodone (a proxy for consumption), prescriptions for oxycodone, the fraction of people that uses pain medicine recreationally, and health care encounters for heroin poisonings — all show a trend break in August 2010 or immediately thereafter.

Although we date the changes to the month following the reformulation of OxyContin, it is possible that some other event in August 2010 led to the observed changes in the heroin and opioid markets. First, we show that none of the other seven opioids that the Drug Enforcement Administration tracks has a negative trend break in the third quarter of 2010. This fact suggests that there was not a different shock at that time reducing the use of opioids more broadly.

Second, we provide additional evidence in favor of the reformulation causing the increase in heroin deaths that takes advantage of differences in the degree to which the reformulation would have affected abusers’ home markets. In particular, we note that markets with greater access to heroin and markets with higher rates of prereformulation opioid abuse are likely to show more substitution away from opioids and toward heroin than markets with less access to heroin or lower opioid abuse rates. We proxy for (a) the former with whether a state is above or below the median prereformulation per capita heroin death rate and (b) the latter with whether a state is above or below the median prereformulation per capita oxycodone consumption. Breaking states into four groups on the basis of these measures, we estimate prereformulation trends and postreformulation trends, and we test whether there are trend breaks after August 2010 for each of the groups. We find that the heroin death rates increased in all groups. In addition, we find that the trend breaks are largest in states that appear ex ante to be at the highest risk of substitution.

Although trends in heroin death rates are similar across the groups before the reformulation, afterward the groups diverge, and the states likely to be at the highest risk of substitution — those above the median in both prereformulation measures — diverge the most.

Our results indicate the potential limitation of this type of supply response to the opioid epidemic. As the abuse rates of pharmaceutical opioids have increased, governments at all levels have looked for technological, medical, and legal solutions to this problem. One of the more popular innovations has been the design of ADFs. Currently, seven drugs on the market have ADFs, and five of those drugs are opioids. As of September 2014, 129 pharmaceutical products with an ADF were in some stage of development.

The Food and Drug Administration has promoted the development of abuse-deterrent opioids to pharmaceutical companies and has worked with manufacturers to bring these products to market as quickly as possible. Recently, the Food and Drug Administration listed the development of ADFs as a national policy priority, 5 states have adopted laws requiring insurance companies to cover ADFs, and similar laws have been proposed in 15 other states. Despite the enthusiasm for ADFs, our results suggest that the benefits of the reformulation are easily undone when readily available substitutes exist.

NOTE
This research brief is based on William N. Evans, Ethan Lieber, and Patrick Power, “How the Reformulation of OxyContin Ignited the Heroin Epidemic,” The Review of Economics and Statisticsem>, forthcoming.