Some government policies, which we refer to as zoning, restrict the supply of housing. Examples include minimum lot sizes, maximum building heights, and planning approval processes. Although these restrictions may confer benefits, they also raise the price of housing. Our research attempts to quantify the effect of zoning on housing prices in Australia’s four largest cities.

Anecdotal evidence suggests that zoning can have a huge effect on land values. For example, a 363-hectare site in Wyndam Vale (40 kilometers west of Melbourne) increased in value from $120 million to $400 million following its rezoning from rural to residential. Examples like this are common. Such large increases in values as a result of zoning changes are inconsistent with the view that a physical shortage of land itself is the main cause of high land values and high housing prices—and instead point toward a high shadow price of government permission to build dwellings as a likely explanation. It is difficult, however, to gauge how representative those anecdotes are or to analyze how they change over time or place.

Given the difficulties in inferring general estimates from specific zoning regulations, we follow an indirect approach that involves comparing property prices to the marginal cost of supply. For detached houses, this means decomposing property values into the cost of the structure and the value of physical land at that location, with the remainder being attributable to zoning restrictions.

For example, we estimate that the average Sydney house, valued at $1.16 million (about USD $850,000) in 2016, represents a $395,000 structure on a $765,000 block of land. Land is expensive—but not because it is physically scarce. Our research indicates that homeowners do not value land as land especially highly. Comparisons of how house prices vary with differing characteristics suggest that home buyers value land as only worth about $400 a square meter on the margin, or $276,000 for the average Sydney block. This marginal or physical value of land represents the opportunity cost of extra land, as judged by what people are prepared to pay for that extra land. This is $489,000 less than its market value. This difference represents what homeowners need to pay for the right to have a dwelling at that location, or the cost of administrative scarcity.

To put this another way, excluding the effect of zoning, the marginal Sydney house buyer could have been supplied with an average house for $671,000—it would have cost $395,000 to build the structure, and landowners (existing or potential) would have been prepared to forgo the land for $276,000. Instead, buyers needed to pay $1.16 million, which is $489,000 (about 73 percent) above the cost of supply.

The difference between the average (or market) price and the marginal (or physical) value of land represents an arbitrage opportunity. In the absence of zoning, an investor could purchase properties where the marginal value of land is lower than the average value, subdivide them to create multiple smaller properties, and make a profit. There are many reasons why such a wedge might arise, but for it to persist requires some barrier. The fact that subdivision is illegal for most blocks of urban land provides a compelling explanation. Other possible explanations, such as imperfect competition or production lags, seem to be empirically unimportant.

This effect is similar but smaller in other cities. We estimate that zoning restrictions raised the average price of detached houses, relative to supply costs, by 69 percent in Melbourne, 42 percent in Brisbane, and 54 percent in Perth. As a share of the total price, these contributions are 42 percent (Sydney), 41 percent (Melbourne), 29 percent (Brisbane), and 35 percent (Perth). Higher-density dwellings require a slightly different approach. We estimate that zoning restrictions raised average apartment prices, relative to marginal cost, by 85 percent in Sydney, 30 percent in Melbourne, and 26 percent in Brisbane. These estimates are qualitatively similar to those that other researchers have found, including studies focusing on real estate prices in Southern California, Florida, New Zealand, Manhattan, and Europe.

As shown in Figure 1, the effect of zoning has increased substantially over time. This increase seems attributable to rising demand—due in turn to higher population, higher incomes, and lower interest rates—interacting with regulations that have prevented supply from keeping up. 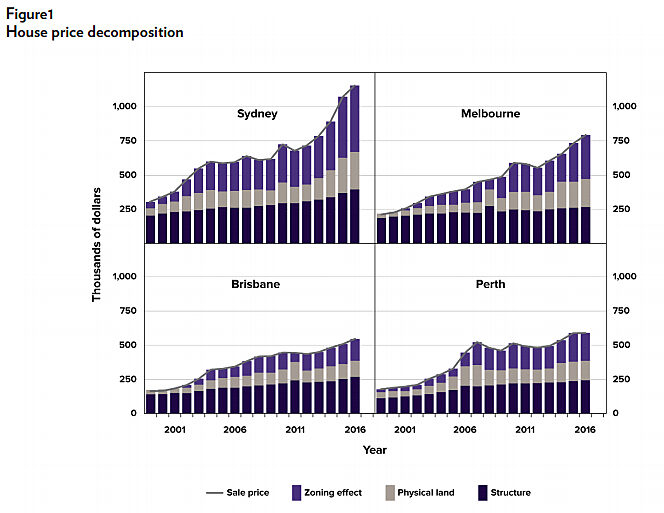 Our approach is narrow and partial equilibrium. We do not examine effects of zoning on quantities, incomes, or other measures. Nor do we examine the benefits of zoning, such as the externalities of congestion. Our approach does not allow us to estimate the difference in house prices compared with a counterfactual of no zoning restrictions, which would require estimating the slope of demand and supply curves.

Another limitation of our approach is that because we estimate the effect of zoning indirectly, as a residual, any errors in our estimates of the other components of marginal costs will flow through to our estimated zoning effect. This matters because our estimates of costs rest on some assumptions that strike us as reasonable but are difficult to quantify.