What are the effects of automation in the labor and product markets? A host of factors may be at play. Automating the production process may displace certain workers, raising the possibility of technological unemployment, but these displacement effects could be offset by a productivity effect. Automation may induce productivity gains, increase market demand and the scale of production, and in turn increase labor demand. Depending on the extent to which productivity gains are passed through to consumers by producers, consumers could benefit from lower prices or producers could retain higher profits. Finally, because of business‐​stealing effects from firms that automate and displace their competitors, the industry‐​level employment and the price and profit effects of automation may differ from their firm‐​level or plant‐​level impacts.

Because of these multiple and countervailing economic forces, understanding the aggregate and distributional impacts of automation among workers, consumers, and producers is fundamentally an empirical question. To design appropriate policy responses, the relative magnitudes of these mechanisms must be estimated in a unified framework. Despite extensive research, the employment effects of automation remain debated, little is known about the impact of automation on consumer prices and profits, and most of the existing evidence is at the industry level rather than the firm or plant levels, obscuring the channels at play. Data limitations explain the relative scarcity of evidence on these questions, which can only be answered with comprehensive data on automation and the labor and product markets.

In our work, we leverage new micro data on the population of firms and plants in the French manufacturing sector to provide a unified analysis of the effects of automation technologies on employment, wages, prices, and profits between 1994 and 2015. We use two complementary measures of automation technologies, the first based on the balance sheet values of industrial equipment and the second based on plant‐​level records of the usage of electromotive force.

We provide descriptive evidence on the population of firms and plants using event studies exploiting the timing of adoption of industrial equipment among plants in the same firm or among firms in the same industry. In contrast with the common view that firms that use more automation technologies reduce their labor force, we find that firm‐​level and plant‐​level employment increases after automation, including for low‐​skilled industrial workers.

A causal interpretation of these patterns would suggest that the productivity effect may outweigh the displacement effect, resulting in a net increase in firm‐​level and plant‐​level labor demand. Moreover, the results also show that the distributional effects of automation in the labor market are subtle. They may occur within each skill group, depending on the sets of tasks performed among detailed occupations, but there is no evidence that automation has a broad effect on inequality.

However, potential unobserved shocks may confound the observed relationships. The event studies show no sign of pretrends, which is reassuring and restricts the potential set of confounders that could explain the increase in employment. Confounding shocks would need to occur simultaneously to explain the increase in automation. Nonetheless, absent a quasi experiment, potential concerns over omitted factors cannot fully be addressed. For example, demand shocks or competition shocks could be at play. Increased demand and increased competition have a direct impact on employment but may also lead a firm to invest more heavily in automation technologies, exactly when the unobserved shock occurs.

To address these concerns, we validate the causal interpretation of the event‐​study results by developing a shift‐​share design. We apply this research design to the subset of firms that import industrial equipment from abroad. Identification stems from changes in the productivity of foreign suppliers of industrial equipment over time, which French firms are differentially exposed to through predetermined importer‐​supplied relationships. This identification strategy approximates an ideal experiment that would randomly assign the prices of automation technologies among firms. Because changes in machines’ quality‐​adjusted prices are not directly observed, it is convenient to use changes in the market shares of international suppliers over time to infer productivity shocks.

The results with the shift‐​share design are closely in line with the earlier results. Firms whose international suppliers of machines become more productive increase their usage of automation technologies and in turn their sales and labor force. We find that sales increase substantially in response to increased automation. In addition, we cannot reject that labor share is unaffected by automation.

These findings are consistent with the role of automation’s productivity effect. Increased automation allows the firm to expand its sales and scale, which requires hiring additional workers for production. However, the firm‐​level relationships may paint a misleading picture because business‐​stealing effects among firms may affect the industry‐​level impacts of automation.

Next we repeat the analysis at the industry level to account for business stealing and other equilibrium effects. We find that the industry‐​level relationship between employment and automation is positive on average but that there is substantial heterogeneity depending on exposure to international trade. While the relationship is positive and significant in sectors that face international competition, there is no significant effect in sectors with low exposure to international competition, and we document that the productivity gains from higher automation benefit both consumers through lower prices and firm owners via increased profits.

Finally, we show that the estimated industry‐​level elasticities of sales, employment, and prices to automation can be rationalized in a simple monopolistic‐​competition model where consumers reallocate demand toward domestic firms with increased productivity and lower prices. The model matches standard estimates of substitution elasticities between varieties produced by different countries for the same industry.

In contrast, it would be difficult to rationalize the industry‐​level results on sales and employment in a closed economy because industry‐​level substitution would need to operate between industries (rather than between products produced by either domestic firms or international competitors within the same industry) and would require large price changes, which we do not observe in the data. Competition with international suppliers providing close substitutes explains why the relationship between automation and employment can remain positive even at the industry level, because the response of consumer demand can be large.

Overall, our findings indicate that automation can increase labor demand and can generate productivity gains that are broadly shared among workers, consumers, and firm owners. In an open economy, attempts to curb domestic automation, in the hope of protecting domestic employment, may be self‐​defeating because of foreign competition.

What Are the World’s Saddest (and Happiest) Countries? 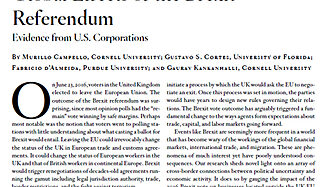 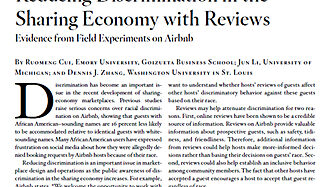