One challenge to studying the effects of corporate campaign contributions is that firms give strategically, and big, successful firms are especially strategic. So naive comparisons of firms that give more versus firms that give less or comparisons of elected officials who received contributions versus those that did not would make it look as if corporate contributions are significantly distorting policy. For example, the companies that have contributed to more members of Congress are often the most prosperous firms, but we have little way of knowing how much of that success is a result of their campaign contributions.

To more credibly estimate the distortionary effects of corporate campaign contributions, we utilize two complementary research designs. In both cases, our goal is to estimate the effect of having one additional elected official to whom a firm has contributed on the value of the firm. If there is a quid pro quo whereby elected officials distort policy to benefit the firms from which they received contributions, this means that the election of an additional official with this kind of connection should benefit the firm, and these benefits should be realized in the firm’s stock price.

The figure below provides a visualization of this analysis. The vertical axis shows the cumulative abnormal stock returns for firms shortly after a close election. The horizontal axis shows the vote share of the firm‐​supported candidate. Each dot corresponds to many firm‐​election pairs with similar vote shares. We see that the stock returns for barely winning firms are essentially identical to those of barely losing firms, suggesting that firms do not meaningfully benefit, on average, from having one additional connected candidate elected.

This particular analysis aggregates data from thousands of firms and thousands of elections across many different settings and time periods. However, if we focus on a subset of the data where we might expect greater effects, we still find no evidence of distortionary effects. For example, if we only focus on gubernatorial elections or Senate elections, bigger or smaller firms, firms with more or fewer political connections, elections before or after Citizens United v. Federal Election Commission, and so forth, we still obtain null results.

We also implement a second design that focuses on a different source of variation. Specifically, we focus on Senate campaigns where the outcome is uncertain, and we utilize betting‐​market data to exploit within‐​campaign changes in market beliefs about the outcome of the elections. Again, we find little evidence that the election of a candidate to whom the firm contributed benefits the firm. For those who worry that very close elections are unusual and unrepresentative, this design provides variation for a broader set of high‐​stakes elections. However, this design also relies more heavily on the assumption of efficient markets. Because of their relative strengths and weaknesses, we show results from both designs, and, reassuringly, they give nearly identical results

The fact that we fail to obtain statistically significant evidence of a distortionary effect doesn’t necessarily mean that corporate campaign contributions have no effects. How big could those effects potentially be? We can statistically reject any purported effect that is greater than 0.3 percent. In other words, if having an additional elected official who received campaign contributions does benefit a firm, the effect is likely no bigger than 0.3 percent of the firm’s value. Of course, many firms in our analysis are quite large and many of the campaign contributions are small, so it could still be worthwhile from the firm’s perspective to contribute. However, the effects are not large enough for any one person in the firm (including the CEO) to justify contributing to the corporate political action committee (PAC) individually, and this is the primary way in which corporate PACs raise money

Although there may be some troubling cases where corporate campaign contributions appear to have distorted policy, a more thorough analysis suggests that, on average, firms do not systematically benefit from having a candidate to whom they contributed elected. This is not to say that there is no reason to worry about money in politics or that there are no good justifications for campaign finance regulations, but we find little evidence that public policy is distorted in favor of firms as a result of corporate campaign contributions.

Five Myths about the Labour Manifesto 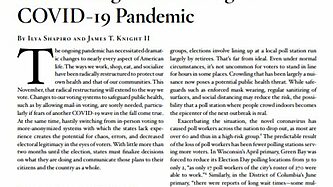