An important issue within current American political discourse is the impact that immigrants have on the communities into which they settle. While this topic has received significant attention, the focus has tended to be the shortrun effects of immigrants. However, another important question is the long‐​run impacts immigrants have on the locations where they settle, particularly since the shortand long‐​run impacts may be different.

We contribute to the understanding of the impact of immigration by taking a historical perspective. In particular, we examine migration into the United States between 1850 and 1920—during America’s Age of Mass Migration—and estimate the causal effect of immigrants on economic and social outcomes today, approximately 100 years later. This period of immigration is notable for several reasons. First, it was the largest in United States history. Second, the wave of “new” immigrants that arrived during this time was not a simple extension of the previous waves of immigrants. While earlier immigrants were primarily of French, Irish, and English origin, the new wave also included, for the first time and in large numbers, immigrants from southern, northern, and eastern Europe, who spoke different languages and had different religious practices.

Empirically studying the long‐​run impacts of immigration is challenging. A natural strategy is to examine the relationship between historical immigration and current economic outcomes across counties in the United States. However, such an exercise has important shortcomings because omitted factors, such as geographic or climatic characteristics, may have affected whether immigrants settled in a particular location, and these may independently impact the outcomes of interest today. Migrants might also have been attracted to locations with more growth potential, or they may have only been able to settle in more marginal locations, with poorer future economic growth, where land and rents were cheaper. All of these concerns would cause the unadjusted correlation between historical immigration and current economic outcomes to be misleading.

Our analysis therefore exploits two facts about immigration during this period. The first is, that after arriving to the United States, immigrants tended to use the newly constructed railway network to travel inland to their eventual place of residence. Therefore, at any point in time, a county’s connection to the railway affected the number of immigrants that settled in the county. The second fact is that the total inflow of immigrants fluctuated greatly during this period, with the flow of immigrants varying significantly from year‐​to‐​year and even decade‐​to‐​decade. Even after normalizing the flows by the current United States population and aggregating to the decade level, which is the unit of observation in the analysis, we still observe significant variation over time. Thus, in some decades immigration was significantly higher than average (e.g., 1850s, 1880s, and 1900s) and in other decades it was significantly lower than average (e.g., 1860s, 1870s, and 1890s).

Our estimates suggest that immigration, measured as the average share of migrants in the population between 1860 and 1920, generated significant economic benefits for today’s population, including significantly higher incomes, less poverty, less unemployment, more urbanization, and higher educational attainment. The estimates, in addition to being highly significant, are also economically meaningful. For example, according to the estimates for per capita income, moving a county with no historical immigration to the 50th percentile of the sample results in a 20 percent increase in average per capita income today.

Our analysis also attempts to gain some understanding about the potential mechanisms that underlie our estimates. It is possible that the benefits that we estimate arise because immigrants created long‐​run economic benefits for themselves and future populations. It is also possible that the benefits we estimate arise due to the relocation, as opposed to creation, of economic prosperity. To better understand exactly why locations with more historical immigration are more prosperous today, we undertake a number of strategies to estimate the presence of spillover effects. We estimate how immigration into a county affects economic outcomes in neighboring counties, in other counties within the same state, and in other counties within the same state that are not neighbors. For all estimates, we fail to find evidence of negative spillovers. That is, we find no evidence of immigration into a county resulting in a decline in long‐​run economic prosperity in nearby counties. In fact, if anything, spillovers appear to be positive, although the precision of the spillover estimates varies.

As a second step in better understanding mechanisms, we ask when the economic benefits of immigrants began to appear. It is possible that in the short‐​run immigrants acted as a burden on the economy and their benefit was only felt in the medium‐ or long‐​run. The immigration backlash, and the rise of social and political nativist movements at the time suggest that there may have been immediate costs to immigration, at least as felt by some groups. However, we find that significant benefits of immigrants are felt immediately. Immigration resulted in more and larger manufacturing establishments, greater agricultural productivity, and higher rates of innovation.

These findings are consistent with arguments, commonly made in the historical literature, which suggest that immigrants benefited the economy by providing an ample supply of unskilled labor, which was crucial for early industrialization. Immigrants also resulted in a small but potentially important supply of skilled individuals, who provided knowledge, know‐​how, skills, and innovations that were economically beneficial and particularly important for industrial development.

Having estimated the short‐​run effects of immigrants, we then turn to an examination of the full dynamic impacts of immigrants, examining their effects in the short‐, medium‐, and long‐​runs. Examining urbanization rates each decade from 1920 to 2000, we find that the vast majority of the benefits of immigration from 1850–1920 were felt by 1920, and that these benefits persisted, increasing slightly, until 2000. We also examine income and education, but for the more limited time period for which data are available (post WWII). We find a similar pattern for these outcomes as well.

Our findings provide evidence that helps us better understand the impacts of immigration in United States history. The first is that, in the long‐​run immigration has had extremely large economic benefits. The second is that there is no evidence that these long‐​run benefits come at short‐​run costs. In fact, immigration immediately led to economic benefits for those already living in the area in the form of higher incomes, higher productivity, more innovation, and more industrialization.

Our results complement recent scholarship examining the selection of immigrants to the United States and their experiences after arrival, as well as the existing literature on the importance of the cultural legacies of immigration. Our findings of the long‐​run benefits of immigrants within the United States complement existing studies that also find long‐​run benefits of historical immigration in Brazil.

These results also complement a large empirical literature that examines the shorter‐​run consequences of immigration in the United States. And the results add to the recent finding that show that in the United States Midwest from 1850–1860, railways accounted for more than half of the increase in urbanization rates, and also provide evidence for a channel that potentially explains this result. The railways brought immigrants to the connected locations which, in turn, increased income and urbanization in those areas.

NOTE:
This research brief is based on Nathan Nunn, Nancy Qian, and Sandra Sequeira, “Migrants and the Making of America: The Short‐ and Long‐​Run Effects of Immigration during the Age of Mass Migration,” January 2017, https://​schol​ar​.har​vard​.edu/ nunn/​publications/​migrants‐​and‐​making‐​america‐​short‐​andlong‐​run‐​effects‐​immigration‐​during‐​age‐​mass. 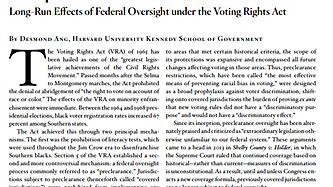 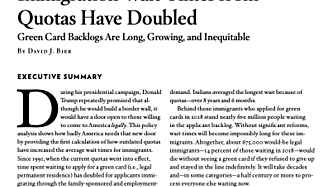