Concerns about policy uncertainty have intensified in the wake of the Global Financial Crisis, serial crises in the Eurozone, and partisan policy disputes in the United States. For example, the Federal Open Market Committee and the International Monetary Fund suggest that uncertainty about U.S. and European fiscal, regulatory, and monetary policies contributed to a steep economic decline in 2008–2009 and to slow recoveries afterwards.

To investigate the role of policy uncertainty, we first develop an index of economic policy uncertainty (EPU) for the United States and examine its evolution since 1985. Our index reflects the frequency of articles in 10 leading U.S. newspapers that contain the following triple: “economic” or “economy”; “uncertain” or “uncertainty”; and one or more of “congress,” “deficit,” “Federal Reserve,” “legislation,” “regulation,” or “White House.” As seen in Figure 1, the index spikes near tight presidential elections, Gulf Wars I and II, the 9/11 attacks, the 2011 debt-ceiling dispute, and other major battles over fiscal policy. We extend our newspaper-based approach to measuring policy uncertainty along three dimensions: back in time, across countries, and to specific policy categories. 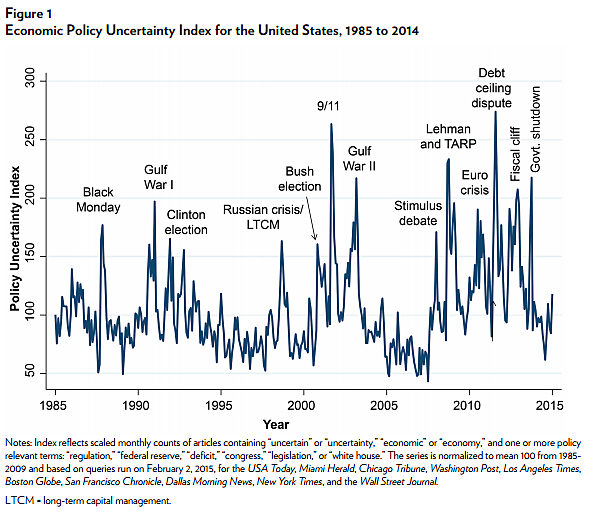 To push back to 1900, we rely on archives for six major U.S. newspapers published throughout the last century. As shown in Figure 2, this long-span EPU index highlights pre– World War II political developments and shocks such as the Gold Standard Act of 1900; the outbreak of World War I; the Paris Peace Conference (Treaty of Versailles) in 1919; and a sustained surge in policy uncertainty from late 1931 when first President Hoover, and then President Roosevelt, introduced a rash of major new policies. The index also shows an upward drift since the 1960s, perhaps due to rising political polarization or the growing economic role for government. 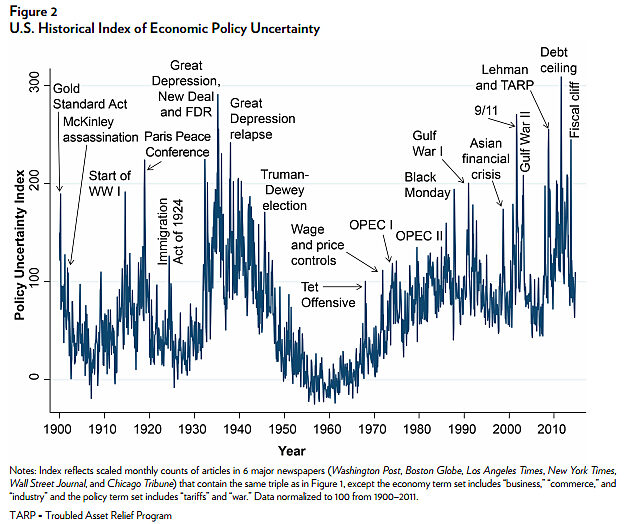 Using similar methods, we construct EPU indices for 11 other countries, including all G10 economies. These indices are particularly helpful in countries with fewer alternative uncertainty measures. We also develop category specific policy uncertainty indices for the United States by specifying more restrictive criteria for those articles that contain our triple of terms about the economy, policy, and uncertainty. As examples, Figure 3 plots indices of health care policy uncertainty and national security policy uncertainty based on the presence of additional terms such as “healthcare,” “hospital,” or “health insurance,” and “war,” “terrorism,” or “department of defense,” respectively. Category-specific shocks and policy initiatives are clearly visible. 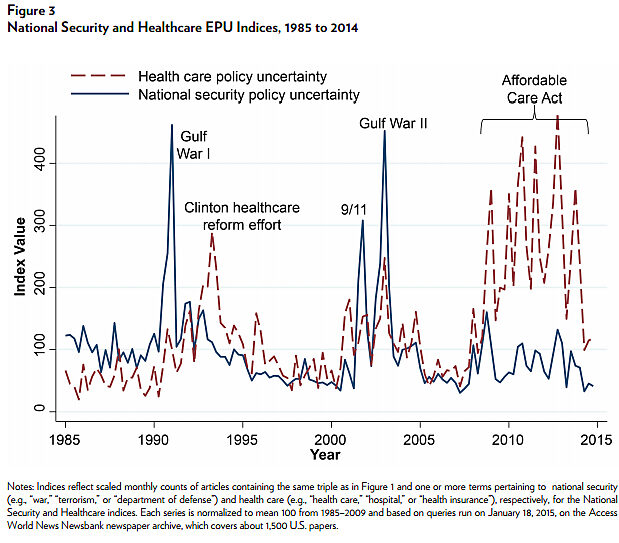 Fourth, we conducted an extensive audit study of 12,000 randomly selected articles drawn from major U.S. newspapers. Working under our close supervision, teams of University of Chicago students underwent a training process and then carefully read overlapping sets of articles, guided by a 65-page reference manual and weekly team meetings. The auditors assessed whether a given article discusses economic policy uncertainty based on our criteria. We use the audit results to select our policy term set, evaluate the performance of our computer-automated methods, and construct additional data. There is a high correlation between our human- and computer-generated indices (0.86 in quarterly data from 1985 to 2012 and 0.93 in annual data from 1900 to 2010). The discrepancy between the human and computer-generated indices is uncorrelated with GDP growth rates and with the level of economic policy uncertainty.

Finally, our indices have a market-use validation: Commercial data providers that include Bloomberg, FRED, Haver, and Reuters carry our indices to meet demands from banks, hedge funds, corporations, and policymakers. This pattern of market adoption suggests that our indices contain useful information for a range of decision makers.

Armed with these indices, we assess the effects of EPU on the economy in two ways. First, we exploit firm-level differences in exposure to a particular aspect of policy—government purchases of goods and services—to estimate the effects of policy uncertainty working through one channel. To do so, we use micro data from the Federal Registry of Contracts and data on government health care spending to calculate the share of firm and industry revenues derived from sales to the government. Next, we show that firms with greater exposure to government purchases respond to policy uncertainty with heightened stock-price volatility and reduced investment and employment. Adding the Chicago Board of Exchanges Volatility Index as an explanatory variable, we still find strong effects of policy uncertainty on stock volatility, investment, and employment, which points to a policy uncertainty channel at work rather than a broader uncertainty effect. We also find that firms in the defense, health care, and financial sectors are especially responsive to their own category-specific EPU measures, confirming the information value of these measures and providing additional evidence of policy uncertainty effects.

These firm-level results point to a causal impact of policy uncertainty on investment and employment in sectors that rely heavily on government spending. But they offer limited guidance about the magnitude of aggregate effects, in part because they capture only one specific policy uncertainty channel (government purchases of goods and services).

Our second approach fits multivariate models to U.S. data and to an international panel of data that exploits our EPU indices for 12 countries. The U.S. results indicate that a policy uncertainty innovation equivalent to the actual EPU increase from 2005–2006 to 2011–2012 foreshadows declines of about 6 percent in gross investment, 1.2 percent in industrial production, and 0.35 percent in employment. The 12-country panel yields similar results. These results are not necessarily causal, but they suggest policy uncertainty shocks have material effects. One interpretation of the micro and macro evidence is that policy uncertainty retards investment, hiring, and growth in policy-sensitive sectors such as defense, health care and construction, and these sectors are important enough for policy uncertainty to matter at the aggregate level.

This paper relates to at least three literatures. The first is research on the impact of uncertainty on growth and investment. Theoretical work on this topic points out that high uncertainty gives firms an incentive to delay investment and hiring when investment projects are costly to undo or workers are costly to hire and fire. Of course, once uncertainty recedes, firms increase hiring and investment to meet pent-up demand. Other reasons for a depressive effect of uncertainty include precautionary spending cutbacks by households, upward pressure on the cost of finance, managerial risk-aversion, and interactions between nominal rigidities and search frictions.

Second, there is a literature focused explicitly on policy uncertainty that considers the detrimental economic effects of monetary, fiscal, and regulatory policy uncertainty. More recent work studies policy uncertainty in Dynamic Stochastic General Equilibrium models, finding moderately negative effects. Finally, a rapidly growing literature on text-search methods uses newspaper archives to measure a variety Figure 3 National Security and Healthcare EPU Indices, 1985 to 2014 Notes: Indices reflect scaled monthly counts of articles containing the same triple as in Figure 1 and one or more terms pertaining to national security (e.g., “war,” “terrorism,” or “department of defense”) and health care (e.g., “health care,” “hospital,” or “health insurance”), respectively, for the National Security and Healthcare indices. Each series is normalized to mean 100 from 1985–2009 and based on queries run on January 18, 2015, on the Access World News Newsbank newspaper archive, which covers about 1,500 U.S. papers. 5 of outcomes. Our work suggests that newspaper text searches can yield useful proxies for economic and policy conditions stretching back several decades, which could be especially valuable in earlier eras and in countries with few data sources.

It’s Time for A New Economic Strategy in Turkey

The Economics of Calorie Labelling Suggests the Policy Won’t Work