Ten years after the Great Recession of 2007–2009, U.S. real GDP, productivity, and other aggregate economic indicators remain well below their historical trend levels. This empirical pattern, in which the U.S. economy has not returned to its long‐​run trend following an economic downturn, is unprecedented.

For nearly 250 years, the United States has recovered from enormous economic and political shocks, including the Civil War, two World Wars, the Great Depression, and the high inflation and oil crises of the 1970s. Following each of these events, the U.S. economy returned to its previous economic trend. Figure 1 shows the historical record of U.S. GDP per capita following these and other negative shocks and a linear trend from 1889 to 2007.

In sharp contrast to this historical record of recovery, the current state of the U.S. economy shows no sign of recovering as it did following previous downturns. Economists are developing and testing various hypotheses for why the economy has not recovered: these range from the persistent effects of the financial and housing crises, to difficulties in understanding the relevant probability distributions of shocks, to challenges in creating new technological innovations.

To date, nevertheless, we remain far from finding a satisfactory reason for this failure to recover. Moreover, since this failure to recover is unprecedented, it is useful to compare other episodes of recovery failures to see how they may shed light on the U.S. experience. We make such a comparison with the economic slowdown that occurred in several Western European countries much earlier.

The European economic slowdown began in the late 1970s and continues today. We make this comparison because the United States and Europe are similar in many respects and because the two episodes share many similar economic features. The post–World War II history of Western and Northern Europe provides insights into why the United States remains depressed relative to its past recovery trends. We also argue that the European experience offers guidance in terms of constructive economic policy changes for today’s U.S. economy.

There are a number of parallels between Europe and the United States, including a large shift in productivity from its previous trend, as well as significant changes in business dynamism, which includes declines in reallocation and entrepreneurship. Europe’s slowdown was driven by a very sudden drop in productivity growth, very similar to the United States.

From 1950 to 1980, most of Western Europe experienced unprecedented prosperity and structural transformation. The post–World War II Western European economic miracles demonstrate that economic recovery and very rapid per capita GDP growth occur even after the most devastating shocks. This is important, as it is often argued that the financial crisis and the resulting loss of wealth necessarily mean that recovery following the Great Recession will be delayed for a long time. The systematic and rapid growth of these European economies, all of which had lost enormous wealth during the war, provides a very strong counterexample of this view and is an important reason why we focus on policies and institutional factors that may be impeding the normal market process of economic recovery. 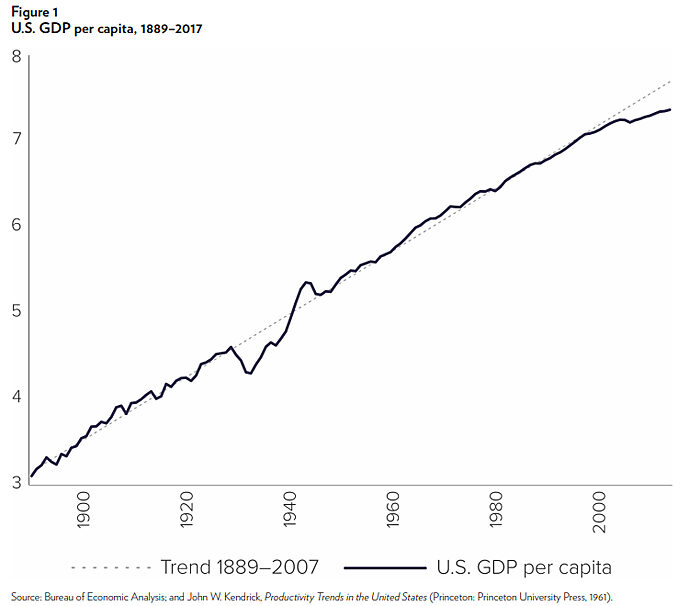 Indeed, transitional dynamics of post–World War II capital stocks being below their steady-state levels does not plausibly account for these growth miracles. While capital stock dynamics did play some role, productivity growth was the primary factor driving Western European economic growth. France, Germany, Italy, and Spain all experienced rapid yearly total factor productivity (TFP) growth between 2.6 and 3.2 percent over this period.

However, the convergence of Western European countries regarding GDP per capita relative to the United States stagnated after 1980. At the time, this long-run slowdown was challenging to identify. One reason was that the global economic slowdown that occurred in the late 1970s and early 1980s masked the underlying long-run shift in Western European economies. A second reason was the slowdown in U.S. TFP growth, which began in the 1970s. This led some observers to believe that the European slowdown was merely the natural consequence of global factors.

However, this view omits the important forces for continued catch-up in Europe. TFP levels in France, Germany, Italy, and other Western European countries remained about 40 percent below the U.S. level. This indicates that there was additional room for European catch-up and, more broadly, an opportunity for Europe to become more competitive with the United States in its export markets. Moreover, even if the European catch-up was slowing down, theory suggests this should have been a much more gradual process, in which we should observe a very slowly declining rate of TFP growth over time, rather than the discrete and sudden slowdown in TFP growth that occurred.

The change in performance in Western Europe became much starker after 1990. Since then, GDP per capita relative to the United States in Western European countries has experienced no catch-up (in Germany and the United Kingdom) or regressed (mildly in Spain and more strikingly in France and Italy).

This unfortunate state of affairs is unrelated to cultural traits or idiosyncratic preferences. For centuries, Europe was at the forefront of technological innovation and adoption. Moreover, in the decades following World War II, Europeans showed a more than considerable skill in catching up with the technological frontier, innovating in relevant fields, and working more extended hours than North Americans.

The reason, instead, for the European lack of TFP growth is the pervasive dominance of what economists Stephen Parente and Edward Prescott have called “barriers to riches.” The most salient of these are widespread barriers to entry; the lack of competition in many industries and the lax enforcement of competition law; surrealistic regulations and pervasive unjustified licensing requirements across Europe; inefficient capital markets; an absence of top universities and lower research and development spending; and an aging population.

Fast European economic growth after World War II was fostered by institutions and governance that offered incentives and opportunities to adopt U.S. technologies and managerial organization, that invested heavily in public infrastructure, that favored the accumulation of physical and human capital, and that exploited the very close economic openness of the continent. But since the mid-1970s, Europe has changed course and run an unfortunate experiment that shows how institutions and policies negatively affect economic performance.

The European experiment offers a number of lessons for the United States today. European economic weakness began once institutions and policies changed. Institutional change resulted in higher taxes, much less competition (which depressed the entry of new businesses), and increased regulation of capital and labor markets. The timing of changes in European TFP growth and hours worked—the two determinants of economic growth—largely coincides with the timing of changes in European institutions and governance.

Until recently, U.S. institutional quality has changed in ways similar to that of Europe. Through 2016, tax rates increased, and in some states, they have increased considerably for the most productive earners. Regulation also rose significantly, especially in financial markets through DoddFrank legislation. This new financial regulation raised the cost of making loans, particularly small business loans. This is because there is a significant fixed-cost component in dealing with compliance and record-keeping issues that make smaller loans less profitable. This becomes even more challenging for small banks (community banks), which have a lower revenue base over which to spread the fixed costs.

On a more positive note, the slowdown in TFP triggered by so-called Baumol’s disease (i.e., the move toward services with stagnant productivity such as education) may be nearly complete, and in the future we may observe a substitution of demand toward services with higher productivity growth as their relative prices fall. Also, a large cut in the corporate tax rate is making U.S. companies more competitive with those in Europe, and a substantial decrease in business regulation, including a partial rollback of Dodd-Frank, has increased business efficiency and has reduced compliance and recordkeeping costs. U.S. labor input and investment’s share of output are growing, and GDP growth has increased. In our view, the continuation of these favorable recent developments will depend on whether the United States continues to adopt more pro-market economic policies.

NOTE:
This research brief is based on Jesús Fernández-Villaverde and Lee Ohanian, “The Lack of European Productivity Growth: Causes and Lessons for the United States,” Penn Institute for Economic Research Working Paper No. 18-024, September 2018, https://ideas.repec.org/p/pen/papers/18-024.html.