The Dodd Frank Act of 2010 (DFA) was designed to overcome the sources of excessive leverage and systemic risk in the U.S. financial sector perceived to have created the Great Financial Crisis of 2007–2008. Since then, considerable controversy has swirled around the efficacy of various components of the multifaceted act. Many have been critical of the Volcker Rule, while others have praised the elevation of capital ratios and the requirements for banks to undergo periodic stress tests. However, there has been mounting concern in the financial community, Congress, and the press over the negative impact of the DFA regulations on small banks and businesses.

One such concern is that the DFA has unduly impeded small-business lending, and thereby may have impeded the pace of business formation, which has been unusually slow in recent years. By increasing the fixed regulatory compliance requirements for making business loans and operating a bank, the DFA has disproportionately reduced the incentives of all banks to make very small loans and reduced the viability of lesser-sized banks, whose small-business share of commercial and industrial (C&I) loans is generally much higher than that of larger banks. Commercial and industrial loans to small firms relative to others may also decline to the extent that stress tests tend to apply higher risk assessments on loans to small or new firms. It has been argued that through these intensive and extensive margin effects the DFA has impeded small-business lending during the recovery from the Great Recession.

Indeed, as Figure 1 indicates, despite an economic recovery, the share of C&I loans under $1 million at banks with $300 million or more in assets has plunged since the DFA was passed in 2010. Driving this development was a decline in 2011 in the real aggregate volume of C&I loans under $1 million and a sluggish, partial unwinding by 2016. This contrasts with an 80 percent rise in the real aggregate volume of loans over $1 million since 2010. This is not an artifact of inflation, or of nominal GDP growth that caused a migration of loans between the size categories, as formal robustness checks demonstrate. Indeed, between 1993 and 2010, the number of small and large real loans rose by roughly similar amounts: 79 and 67 percent, respectively. 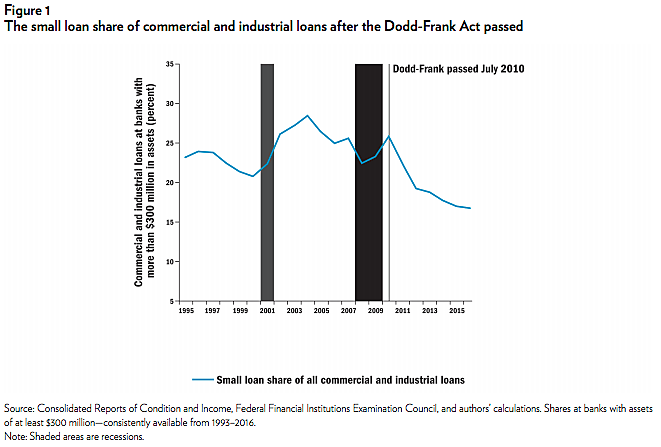 These patterns also occurred at large banks, where the small-loan share of C&I loans posted declines, but which cannot be attributed to pre-DFA trends in the consolidation of the banking system away from small banks. Using annual data available since 1993, we find that the bulk of the post2010 declines (9 percentage points) at both categories of banks cannot be attributed to business cycle effects or shifts in bank funding cost spreads, and appear to have arisen from regulatory reforms enacted since DFA’s passage. The initial estimated magnitude of this regime effect is larger for smaller banks. These results are consistent with concerns that an unintended consequence of the DFA has been to reduce smallbusiness lending.

To further assess whether these loan patterns do not simply reflect loan demand shifts that coincided with the DFA, we examine bank loan officer survey data on changes in credit standards to assess whether the DFA has induced loan supply shifts away from small business lending. Bank survey results indicate that bank credit standards for making C&I loans became relatively tighter for small businesses compared with medium and large firms during the period when DFA requirements were most onerous on smaller banking organizations. Those survey data are consistent with the share of small businesses reporting to the National Federation of Independent Businesses that availability of credit had tightened in the prior three months. Furthermore, lending survey data suggest that regulatory relief for smaller banking organizations in 2015 may have helped stop a further deterioration of loan supply for small relative to large firms, but it has not reversed earlier relative declines induced by the DFA.

Owing to economies of scale, the increased fixed costs of complying with loan regulations have reduced the incentives for individual banks to make small loans and have induced greater consolidation of the banking industry away from small banks that disproportionately have lent to small businesses. Consistent with concerns that the DFA has induced the banking industry to reduce lending to small businesses, we find strong evidence of a break in the downward trend in the small business share of C&I loans that coincides with the passage of the DFA. The inclusion of controls for the business cycle along with the asynchronous timing of the economic recovery and the plunging small-business loan share imply that most of the recent downtrend stems more from the DFA-induced regulatory response to the Great Recession rather than the nonregulatory impact of that downturn. Since 2010, the small business share of C&I loans has fallen by 9 percentage points, and our results indicate that the vast bulk of this decline is linked to the passage of the DFA.