In 2018, more than 58,000 patients in the United States were added to the transplant waiting list, yet only about 37,000 transplants were performed that year. Currently, about 95,000 patients are waiting for a kidney, the most commonly transplanted organ. The average wait is around 4.5 years while receiving dialysis, and several thousand people die every year because they cannot find a donor. Recent estimates indicate that the shortage of kidneys has an annual economic cost of approximately $3 billion. There have been debates in recent years about legalizing living kidney donor compensation as a way to reduce the imbalance between the need for kidneys and their availability. Ethical concerns such as the exploitation of participants, coercion, undue influence, and unfair allocation of organs are often cited as main reasons for the opposition to paying donors and for the legislation of its prohibition. Organ donor payment is, in terminology that Nobel Laureate Alvin Roth introduced, a “repugnant transaction”; that is, an exchange in which the parties want to transact but third parties disapprove and wish to prohibit.

In recent research, we provided the first investigation of the nature of Americans’ preferences toward paying organ donors. So far, there has been little or no evidence for the sources of aversion to legalizing donor compensation among the general population, and for whether opposition is extreme (i.e., paying donors violates sacred values) or whether people would accept a paid‐​donor system if it produced large enough organ supply gains.

We ran an online choice experiment on a sample of about 2,700 U.S. residents. The sample, recruited through a professional survey firm, was constructed to match the U.S. population on sex, age, race, and education.

We randomly assigned each respondent to consider one hypothetical paid‐​donor kidney procurement and allocation system, and asked the respondent to view it as an alternative to the current system. Each individual made five choices to indicate either support for the proposed system or preference to keep the current one. The features of the alternative system were the same in all five choice scenarios, except for the number of transplants that, in each scenario, we asked each participant to assume the system would generate. Each paid‐​donor system varied according to the nature of compensation (cash or noncash, such as contributions to college or retirement funds or tax rebates), the amount of the payment ($30,000 or $100,000), and the identity of the payer (a public agency or the kidney recipient).

Our experimental design allowed us to characterize respondents’ preferences toward the number of transplants performed and institutional features of paid‐​donor procurement and allocation systems. Varying who pays for the organs allows us to study whether respondents object to payments per se or if they care about distributional consequences. Noncash compensation could allay the concern that individuals might receive undue pressure to give their kidneys if they are in urgent need of cash, and different payment amounts could affect perceptions of exploitation or undue influence. Finally, the variation in the supply of kidneys lets us estimate the relationship between favoring organ‐​donor payments and the additional transplants it is assumed to achieve (and whether this relationship varies with the institutional features of the system).

Moreover, we asked about half the participants to express their moral views about the current system as well as the paid‐​donor system to which we assigned them (at each hypothesized supply level), with reference to six principles: autonomy of choice, undue influence, exploitation of the donor, fairness to the donor, fairness to the patient, and human dignity. We could therefore assess whether the respondents’ attitudes toward the outcomes and procedural features of paid‐​donor systems have ethical roots and which principles are more relevant.

We found that approval of paid‐​donor systems increases with the size of the hypothesized kidney supply gains. The level of support at any given supply increase, however, differs across systems. In particular, systems where the patient pays for the organ receive much lower acceptance than systems where compensation comes from a public agency. The nature and amount of payments, in contrast, have limited effects on support. Thus, both the systems’ features and transplant outcomes have an impact, on average, on the support for paid‐​donor systems, with some institutional features, namely the identity of the payer, being particularly relevant.

We also document a polarization in attitudes; about 46 percent of respondents were in favor of payments regardless of the hypothesized additional transplant, whereas 21 percent would oppose payments even if they helped satisfy the entire need for kidneys. About 18 percent of participants would switch from opposing to supporting payments if supply gains were sufficiently large. Strong polarization of opinions is a recurring feature in contexts that are morally controversial. However, the fact that about one‐​fifth of respondents were sensitive to the tradeoff between concerns about payments and their potential supply effects indicates that positive supply effects of paying organ donors may significantly change societal support for legalizing these payments. An implication of this finding is that pilot studies of compensation to organ donors would be useful for people to form more informed preferences on this matter.

Ethical considerations were a major determinant of attitudes toward using prices in this market; these considerations, moreover, varied widely in the population. The opposition to systems that contemplate payments by the organ recipient was mainly derived from concerns about the fairness of the resulting organ allocation. Thus, although most respondents were in favor of donors being paid, there was strong opposition to patients paying. This finding has implications for policy because it indicates that appropriate institutional design can allay a major ethical concern in this context.

Moreover, attitudes toward payments for kidney donors correlate with respondents’ broader ethical views. Individuals with more deontological beliefs are more likely to oppose payments regardless of the kidney supply gains, whereas those who place high value on compassion, freedom, and pleasure are more likely to support the legalization of payments.

As a further corroboration of our findings, we gave the respondents the possibility to profit (or incur a cost) from having the researchers donate money to a foundation that is in favor of expanding allowable payments to organ donors. Participants who opposed payments regardless of the transplant gains were less likely to donate, whereas those who switched from being opposed to being in favor at some higher supply gain (and even more so those who expressed support at any supply gain) were more likely to donate. We found opposite patterns of donations to a foundation that opposes paying organ donors.

Evidence on whether individuals perceive tradeoffs between moral beliefs and supply considerations in the case of repugnant transactions is virtually nonexistent. In addition to providing evidence on Americans’ attitudes toward paying kidney donors, their heterogeneity, and their moral foundations, we hope that our study and methods will stimulate further investigations of views about other morally controversial and highly policy‐​relevant transactions. Together with ours, these studies would provide valuable information about how ethical concerns determine the reach of markets. This endeavor would benefit from the convergence of multiple scholarly disciplines to design credible empirical analyses within economics, moral and social psychology, philosophy, law, and political science. We hope that our research will lay the groundwork for more studies in this spirit.

NOTE:
This research brief is based on Julio Elias, Nicola Lacetera, and Mario Macis, “Paying for Kidneys? A Randomized Survey and Choice Experiment,” forthcoming in the American Economic Review. 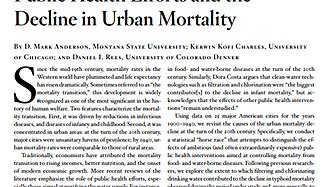