Throughout most of 2020, the United States has battled the COVID-19 pandemic. The spread of the disease in the United States was rapid and deadly: it was confirmed that COVID-19 had infected more than 1.7 million Americans and had killed more than 93,400 Americans as of May 25, 2020. That day also saw one additional fatality of historic note: George Floyd, a 46‐​year‐​old Black man, died when an officer of the Minneapolis Police Department used his knee to pin Floyd’s neck to the ground for more than eight minutes. The death, which resulted in the officer being charged with murder, touched off a series of protests in cities around the United States, with protesters demanding, among other things, greater social equity and policing reform. These two national movements—the fight to contain COVID-19 and the Black Lives Matter protests—have espoused some tactics that appear to be in direct opposition to one another.

The main vector for transmitting COVID-19 is believed to be respiratory droplets, which are emitted during activities such as breathing, speaking, coughing, or sneezing. The disease has been able to circulate rapidly in part due to its ability to spread from asymptomatic carriers, allowing individuals to infect others without knowing that they have done so or even that they themselves are infected. One of the main tactics for controlling the spread of COVID-19 is social distancing: avoiding large public gatherings and maintaining at least six feet of distance between individuals. A growing amount of literature has shown that the joint strategies of social distancing and mask wearing have been largely successful at slowing the spread of the disease.

At the same time, protests, designed to galvanize public action for social justice, are by definition large public gatherings, in which it is difficult to avoid close contact with others. While attendees can practice some compensatory behaviors to prevent spreading infection—such as wearing masks, maintaining distance from each other, and staying home if they feel ill—it is difficult at such an event to completely avoid human contact. Many activities that are common at protests, including chanting and shouting, can exacerbate the spread of respiratory droplets. Additionally, many forms of crowd dispersal used by law enforcement to break up protests, such as pepper spray and tear gas, illicit coughing, which increases the likelihood that an infected individual will spread disease.

This mismatch of tactics has drawn many in the public health community to speculate that the protest movement could lead to a surge in COVID-19 cases. On the other hand, some public health experts have made the argument that the goals of the protests may be worth the costs.

Whether the Black Lives Matter protests actually caused an increase in community‐​level spread of COVID-19 is an open question. While the protests are large gatherings that do not abide well with social‐​distancing guidelines, the protesting population is not the only one that may have a behavioral response. For example, other people who did not wish to participate in the protests, perhaps due to fear of violence from police clashes or general unrest, may have chosen to avoid public spaces while protests were underway. This could have had an offsetting effect, increasing social‐​distancing behavior in other parts of the population. The net effect on both social distancing and the spread of COVID-19 for the entire local population is thus an empirical question and the focus of our research.

Using anonymous cellphone‐​tracking data from SafeGraph Inc., as well as data on the local prevalence of COVID-19 from the Centers for Disease Control and Prevention, we demonstrate that cities that had protests saw an increase in social‐​distancing behavior for the overall population relative to cities that did not—a result that is consistent with avoidance behavior by people not participating in the protests. In addition, we find no evidence that net COVID-19 case growth differentially rose following the onset of Black Lives Matter protests, and we even find modest evidence of a small longer‐​run decline in case growth.

These findings show that the protests and the fight against COVID-19 were, on net, aligned. It is important to underscore that our findings do not imply that this was the case for all parts of the population. The net effect of increased sheltering and decreased case growth could mask adverse outcomes within a subset of the population (specifically protest attendees). This could hypothetically cause a redistribution of public health benefits (and costs) across demographic groups.

However, when considering the results’ implications for the entire population, public speech and public health did not trade off against each other in this case. Our findings also highlight the importance of understanding the behavior of all relevant populations when conducting analysis in the realm of social science in general and public health in particular. The most visible portion of the population is not always the primary driver of the outcome of interest. 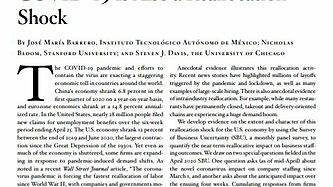 COVID-19 Could Change the Gun Control Debate for a Generation