Given the global economic power and financial importance of the United States, it is understandable that U.S. policymakers view sanctions as a primary foreign policy tool. Unfortunately, the historical record demonstrates that sanctions are rarely successful in achieving their objectives, especially on issues of high salience, such as questions of war and peace. By overusing sanctions, policymakers risk degrading America’s global economic power and harming its national security.

The United States uses sanctions to isolate, punish, deter, degrade, and compel foreign states. While sanctions often negatively affect the economies of the targeted nations, they rarely succeed in achieving their policy objectives. A study by the Peterson Institute for International Economics found that unilateral sanctions were particularly unsuccessful, achieving their goals only 13 percent of the time, while other studies had the success rate as low as 5 percent.

The United States has maintained sanctions on North Korea and Cuba for decades, yet North Korea possesses nuclear weapons and both regimes remain in power. The sanctions levied against Russia in recent years have done little to deter Moscow’s nefarious activities.

The multilateral sanctions imposed on Iran by the P5+1 were effective in driving negotiations that eventually led to the Joint Comprehensive Plan of Action (JCPOA). But the unilateral reimposition of sanctions on Iran following America’s withdrawal from the agreement will not result in a better nuclear deal nor regime change. It has, however, increased the likelihood of Iran reconstituting its nuclear weapons program and has eroded what little trust had been developed through the negotiating process.

Both reneging on the JCPOA and the reimposition of sanctions have also strained relations between the United States and the other P5+1 nations. This year, European countries, led by Germany, France, and the UK, created a special‐​purpose vehicle for trade with Iran and a European supervisory board that acts as a diplomatic “sovereign shield” for private companies. While these actions may seem innocuous now, they have the potential to threaten U.S. economic power over the long term.

Sanctions can be a useful tool, but they often come with significant costs: innocent citizens and businesses in America and in the targeted nations shoulder much of the economic burden, while foreign governments seek ways to circumvent them. Sanctions also erode America’s economic and financial dominance. Given these costs, and the fact that sanctions are rarely effective, policymakers must be much more thoughtful and judicious in their use of this foreign policy tool.

“Not‐​So‐​Smart Sanctions: The Failure of Western Restrictions Against Russia” by Emma Ashford, Foreign Affairs 95, no. 1 (January/​February 2016). 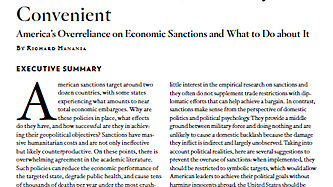 Ineffective, Immoral, Politically Convenient: America’s Overreliance on Economic Sanctions and What to Do about It

What Is the Government Using the Shutdown For?

Take Back Cities for People and the Automobiles They Use