Under current law, citizens of the United States and Canada can visit each other’s countries for a short time without a visa. However, visitors face tight restrictions on residing or working in each country. The United States and Canada should create a bilateral labor agreement (BLA) that allows for the free movement, residency, and work rights for citizens in both countries. Drawing on lessons from Europe’s Schengen Agreement, this agreement should be based on three principles: work authorization, restricted welfare access, and reciprocity. Data from an original survey show that an overwhelming majority of American citizens, across both major political parties, would favor a BLA based on these principles.

In many regards, it is odd that the United States and Canada do not already have a free movement agreement. Both nations originated as British colonies and are developed democracies. In addition to long‐​standing cultural similarities, both nations cooperate extensively on economic, political, and defense affairs. Both nations are part of the North Atlantic Treaty Organization and the North American Aerospace Defense Command and will likely soon be part of the United States‐​Mexico‐​Canada Agreement. A BLA would be a natural extension of these treaties. Not only would both nations benefit from an expanded labor market, but a free movement agreement would also reinforce regional integration while respecting the sovereignty of each nation.

Traditionally, opponents of immigration liberalization are concerned with the cultural, sociopolitical, and economic effects of liberalizing immigration.36 The fear that immigrants will erode national cultural, political, and economic institutions runs deep, but these traditional concerns should be minimal with regard to a BLA between the United States and Canada, countries with similar cultures, political systems, and economies. Even if immigrants from undemocratic nations erode the political institutions of their host nations, a claim without empirical support, both the United States and Canada are established democracies.37 It may be justifiable to be concerned about immigrants from undemocratic nations being unable to adjust to democratic practices, but this would not extend to either American immigrants in Canada or Canadian immigrants in the United States.

Similarly, concerns about cultural incompatibility are minimal as both nations originate from British colonies and are mostly English‐​speaking. Both nations have market‐​based economies and comparable living standards. Politically, culturally, and economically, the United States and Canada are sibling nations. Not surprisingly, given their commonalities, Americans and Canadians have generally positive impressions of their neighbors and favor regional cooperation.38

Lessons from the Schengen Agreement

The Schengen Agreement was introduced in the mid‐​1980s to allow free movement within the developed Western European nations and has since gradually expanded. Now it includes some non‐​European Union (EU) states such as Norway, Iceland, and Switzerland and has partial opt‐​outs for Ireland. It is arguably the most ambitious and successful free movement agreement in the developed world.39 The free movement of people is one of the most important principles of the EU. A U.S.-Canadian BLA would benefit from studying the Schengen Agreement’s successes and failures.

The Schengen Agreement’s work authorization and reciprocity provisions have been key to its success. First, citizens of member states have the right to live and work in any member country. Second, the agreement is reciprocal; nations agree to allow free movement within their borders and, in return, gain access to free movement rights in other nations. Both components would be essential to the success of a U.S.-Canadian BLA.

Current U.S. immigration law severely restricts the ability of immigrants to work. Migrants on certain visas are only allowed to work for a specific firm, for instance. Immigrants that face work restrictions are more likely to face discrimination, wage theft, and other labor abuses because of their inability to switch between employers.40 Such restrictive policies harm not only migrants but also the wider economy. They decrease economic productivity by impeding efficient labor allocation between firms.41 The Schengen Agreement avoids these problems by allowing immigrants to work without being tied to a specific firm. A U.S.-Canadian BLA should likewise allow immigrants to work for any employer.

Reciprocity is politically important as it emphasizes that a BLA benefits both sides. Canadians would have access to the United States, but likewise Americans would have access to Canada. Immigration, especially between the global south and north, is often framed as being primarily beneficial to one side but detrimental to the other. Although immigration is beneficial to both parties, and both the United States and Canada would benefit from a BLA, reciprocity allows for free movement to be better framed as beneficial to all parties. The Schengen Agreement’s popularity stems from its member states’ reliance on the political support of emigrants who benefit from the agreement and from those who value free movement. For example, France receives immigrants from other EU countries, but its citizens in turn can immigrate to other member states, and they value the option to do so.

Although the Schengen Agreement has been successful overall, it has also had some failures. Most notable is the case of the United Kingdom (UK). When the UK was a member of the EU, it had an opt‐​out to the Schengen Agreement that lowered the barriers for EU citizens to visit and work in the country. However, the UK was not exempted from providing welfare benefits to EU migrants.42 Hesitance to extend welfare benefits to immigrants is a perennial concern in immigration debates and even more so when discussing BLAs or other free movement agreements. These concerns can be addressed by restricting immigrant access to welfare benefits.

Survey Results for a U.S.-Canadian BLA

This section uses survey data to show that, among U.S. citizens, there is broad support for a BLA with Canada if these three principles are respected: work authorization, restricted welfare access, and reciprocity. Although only U.S. citizens are polled in this survey, the results would probably generalize to Canadian citizens based on prior comparative public opinion research of regional integration.43

The survey’s respondents were recruited in mid‐​2019 through Amazon’s Mechanical Turk service, an online marketplace regularly used to recruit respondents.44 After restricting the sample to only U.S. citizens residing in the continental United States, the sample size is 1,366.45 Respondents were asked about their race, gender, and party identity. After answering demographic questions, respondents were randomly presented with one of eight proposed variations of a BLA with Canada. The question randomly varied as to whether the agreement would allow Canadian citizens to live and work (compared with live but not work), would give Canadian citizens access to American welfare programs (or not), and would be explicitly reciprocal. This type of survey allows experimental testing of which policy details increase support for a BLA.46

Figure 1 presents support for a BLA with Canada by specific policy details regarding work, residence, welfare, and reciprocity. Of the respondents, 66 percent favored a BLA if it were to allow immigrants to live and work, approximately 5 percentage points more than if immigrants faced work restrictions. Seventy percent favored the agreement if immigrants were to be explicitly denied access to welfare, a 13 percentage point difference compared with if welfare access were allowed. An explicit reciprocal agreement garnered the support of 70 percent of respondents. All three differences are statistically significant using conventional measures.47

Figure 2 shows support for a BLA by respondent demographics, party identification, race, and gender. There are minimal differences by either race or gender, but there is a notable difference between Democratic and Republican respondents. For instance, 76 percent of all Democrats favored a BLA with Canada compared with 44 percent of all Republicans. This seems to suggest, at first blush, the policy might face opposition by Republicans and become a partisan wedge issue. However, this gap is somewhat misleading.

Figure 3 shows support for the BLA with Canada by party identification when the policy proposal upholds the principles of work authorization, restricted welfare access, and reciprocity. If the three principles were to be upheld, a sizeable majority of Democrats (87 percent) and Republicans (64 percent) favored a BLA with Canada. This result underscores the importance of getting the policy details right when discussing immigration policy.

Features of a U.S.-Canadian BLA

In practice, how could a BLA between the United States and Canada be implemented with the abovementioned principles? Would a drastic change in the law be required? Surprisingly, no. The creation of a U.S.-Canadian BLA would require minimal changes to existing law. With congressional approval, one possibility is to amend the existing Trade National (TN) visa for Canadians. The TN visa was created as part of the North American Free Trade Agreement.48 By amending the TN visa, as opposed to creating a new classification, policymakers can use its existing structure and minimize cost of implementation.

Canadians can currently obtain a TN visa upon arrival to the United States with proof of Canadian citizenship, a letter from a prospective employer, and if applicable, credential evaluations.49 A TN visa allows Canadians to live and work in the United States for an initial period of three years and can be renewed indefinitely. There is no limit to the number of Canadian citizens that can hold a TN visa.

A BLA between the United States and Canada would be a natural extension of existing cooperation between our two nations. Based on evidence from an original survey, a U.S.-Canadian BLA would enjoy broad support from Democrats and Republicans if it upheld three basic principles: work authorization, restricted welfare access, and reciprocity. In practice, these principles can be respected by reforming the TN visa, an existing classification for Canadian citizens, or revising the visa‐​free tourist travel rules.

41 B. Lindsay Lowell and Johanna Avato, “The Wages of Skilled Temporary Migrants: Effects of Visa Pathways and Job Portability,” International Migration 52, no. 3 (September 2013): 85–98.

45 This sample size is adequate for evaluating nationwide opinion, but caution should be used when interpreting regional variations.

46 Question wording: Would you support allowing Canadian citizens to [live, but not work / live and work] in the United States indefinitely? Canadians would [not have / have] access to American welfare programs. [-blank‐ / In exchange, American citizens would receive reciprocal treatment in Canada.] Answer wording: I would support this policy / I would not support this policy.

48 A TN visa classification also exists for Mexican citizens, but its requirements are significantly stricter.

The U.S. Should Offer Taiwan a Free‐​Trade Agreement

Dispute Settlement and the US-UK Trade Agreement: Lessons from the NAFTA Renegotiation 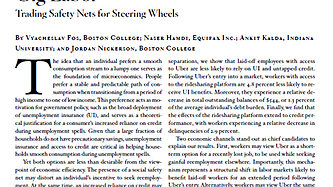