On immigration, the big political camps are in a tug of war. One side favors more immigrants; the other side wants fewer immigrants. But when faced with such a struggle, policymakers who care more about influence than about feeling solidarity should consider tugging the rope sideways, where fewer might oppose their efforts. To tug the rope sideways on immigration, policymakers should take a policy position that is perpendicular to the axis of more versus fewer immigrants. One sideways‐​pull policy would be to reform immigration laws to use prediction markets to admit different immigrants, without increasing the total number.

Even if policymakers disagree on how many immigrants should be admitted, they should agree that a system that selects immigrants who are more highly qualified is preferable. For example, all else being equal, it would be better for immigrants to have higher incomes, win prestigious awards, pay lots of taxes, volunteer to help their communities, maintain our political or social equilibria, follow the law, and impose few burdens on government benefit systems. Yes, policymakers and voters may disagree on the relative weights to assign to such characteristics, but these disagreements would be relatively modest; there’s plenty of room here for Congress to work together to create a system that selects immigrants who would best thrive in America.

Note also that while a better way to select immigrants might tempt policymakers to accept more immigrants overall, immigration skeptics tend to feel risk averse about such changes. Thus, policymakers should look for ways to pick immigrants that seem especially good at assuring skeptics that any immigrants admitted will turn out to contribute positively to the United States, regardless of the overall numbers allowed.

The Prediction Market Visa: A Betting Market to Select Immigrants

For types of costs or benefits that the government cannot measure individually, the government could assign to each immigrant some average cost for residents of their location and demographic type. When there are doubts, the government should err in the direction of estimating higher costs and lower benefits so that the measures are biased against immigrants adding value and risk averse regarding uncertainty.

From these cost and benefit estimates, we could produce a conservative net fiscal value number for each immi­grant for each year; the number could be positive or negative. Also, from these numbers, the government could create two kinds of financial assets that pay annual dividends proportional to each of these two numbers, conditional on that person immigrating.

The key is that the government would create and sell these financial assets after immigrants apply for admission but before they are admitted. The government would then watch the market prices for these assets, adjust, and offer prediction‐​market visas to the immigrants who are trading at the highest market prices, which would indicate the market’s choice for the immigrants expected to have the best positive net‐​fiscal contribution. In other words, the government would use the predictions of traders who have put real cash on the line to select immigrants whom the market thinks will be net‐​fiscal contributors. Because the monetary payout for the financial assets would be based on their actual real net‐​fiscal impact, traders would have an economic incentive to investigate and place well‐​informed bets about immigrants. Policymakers could then rely on these market prices giving decent estimates of the current present financial value of this stream of future revenue.

Those who are skeptical about particular immigrants, or about immigration in general, could insure themselves against bad immigration choices via trades in these markets—trades from which they expect to profit if their skepticism turns out to be accurate. These markets could trade financial assets representing individual immigrants on a prediction‐​market visa until the immigrant naturalizes.

It is easy to set up markets where people can trade such finan­cial assets, as the popularity of political betting markets shows.110 If the government allows trading in such financial assets regarding immigrant applicants, with those trades being conditional on individuals being admitted, then such prices would estimate the net financial value of potential immigrants conditional on their being accepted. This is a straightforward application of the idea of decision markets or “futarchy,” on which I have written often before.111

Issues with the Prediction‐​Market Visa

There are, of course, some issues that policymakers will have to grapple with. For example, if there is not enough trading in these markets to create sufficiently accurate prices, market trading could be encouraged via subsidizing automated market makers. The subsidies could come from fees on immigrant visas. The government could also make it easy to trade large on bundles of immigrant applicants with similar features, such as education, age, or some other characteristic. In other words, traders wouldn’t need to focus on individual immigrant applicants.

Another issue is that traders must be given some information on each applicant, and market estimates are more accurate if traders have access to more information. But applicants should be assured some privacy. Immigration skeptics, however, might want to limit such privacy to better ensure that each immigrant is, in fact, a net‐​fiscal contributor. One possible solution is that traders could be allowed to trade on simple easy‐​to‐​formalize information about immigrants that they wouldn’t be able to see via trading bots that could see private information on appli­cants but that would leak nothing to others.

Once immigrants become citizens, they could be given stronger privacy rights, as the main use of the market would be to advise entry. And that task would be completed once they naturalize. While the government‐​calculated dividend values on them each year would reveal some infor­mation, there would be no need to reveal details of how that number was computed. To further cut information revealed, the government could even wait and pay dividends as a single lump every few years.

Another potential problem is that, in principle, a trader could acquire a large enough net negative stake in an individual immigrant that the trader would then have an incentive to hurt that immigrant’s chances of achieving a high net‐​fiscal value, perhaps by bribing the immigrant’s boss to fire him. The government might thus want to limit the size of negative trader stakes held after the immigrant arrives or increase privacy for some personal identifying characteristics.

Some groups of applicants, such as a church, family, or firm, might be worth more if admitted as a unit together. To estimate for this case, the government might offer trades on packages of assets for a whole group of applicants—trades conditional on them being admitted as a unit. With a high enough estimated value of the group, the government might then admit such groups as units, even when there are reasonable doubts about individual members.

This paper focuses on evaluating immigrant applicants in terms of expected net‐​fiscal impact for concreteness because that is a common concern that many Americans have about immigrants. But it would be straightforward to substitute other metrics of evaluation as long as those metrics referred to measurable outcomes. Awarding visas through prediction markets is a pull‐​the‐​rope‐​sideways proposal designed to improve policy on the hot‐​button topic of immigration without taking a side on the topic’s main dispute of how many immigrants to admit annually. Whether policymakers want more or fewer immigrants, they should want better immigrants, and prediction markets are a promising way to get them. 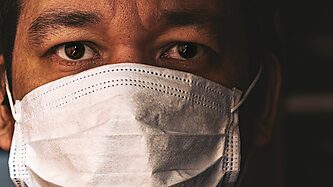 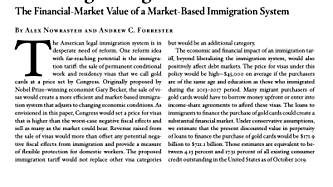