If values could always be clearly distinguished from facts and ends from means, debates over economic policy would be more productive and less rancorous.

The recently published First Draft of the U.S. Bishops’ Pastoral Letter on Catholic Social Teaching and the U.S. Economy claims to be concerned primarily with values and ends. The fundamental issue in economic policy, according to the Letter, is the goals we ought to be pursuing and the moral objectives that ought to guide our choices. Throughout the Letter, the language and tone are those of the prophet or preacher, calling people to a reexamination of values, a new and compassionate vision, a lively sense of moral responsibility, a commitment to economic justice, a conversion of heart. Specific policies to implement the moral objectives advocated in the Letter are treated as a secondary issue that can be worked out later through reflection and dialogue. The first and hardest task is to determine the direction in which we ought to move.

Thirty years ago, in an influential essay entitled “The Methodology of Positive Economics,” Milton Friedman ventured the judgment that currently in the Western world, and especially in the United States, differences about economic policy among disinterested citizens derive predominantly from different predictions about the economic consequences of taking action–differences that in principle can be eliminated by the progress of positive [i.e., scientific] economics–rather than from fundamental differences in basic values, differences about which men can ultimately only fight.[1]

In Friedman’s view, our hardest task is to agree on the specific policies most likely to promote our common objectives. Agreement on goals is much less of a problem, since we don’t really disagree in any fundamental way on our basic values.

If past experience in similar situations is any indication at all, the debate that the bishops have invited in response to their proposals (No. 22)* is going to founder on this issue. Defenders of the Letter will insist that the fundamental question is a moral one; critics will insist that it is the bishops’ understanding of economics. The debate will turn rancorous as implications of indifference to suffering and injustice are exchanged for charges of culpable ignorance, each side maintaining that the other is the victim of an obsolete ideology.

This inability to agree on what it is we are disagreeing about reflects the fact that our notions of how economic systems function are bound up with our conceptions of the goals they ought to serve. The bishops urge their objectives in passionate language because they believe that the American economic system is capable of performing in accord with their prescriptions–once the citizens of the United States commit themselves to a biblical (and humane) vision of economic life. This critique will argue that the bishops’ moral analysis is misguided because economic systems cannot operate in the way that the bishops suppose they do. 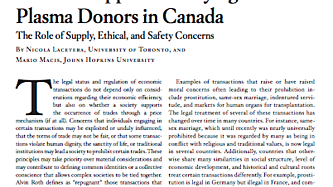