President Obama and a bipartisan group of eight senators have begun to push for immigration reform. Speaker of the House John Boehner (R-OH) likewise said he supports an immigration overhaul as a “top priority” for 2013. The Texas Republican Party even called for an expanded and effective guest worker visa program to link American employers with skilled and low‐​skilled foreign workers.

The three components of politically feasible immigration reform are legalization for some unauthorized immigrants, border and workplace enforcement to impede the entry and hiring of unauthorized immigrants, and increased numbers of guest workers and legal immigrants. The costs and benefits of legalization, security, and employee verification have been debated elsewhere in detail but the costs and benefits of guest worker visas and how to create them have not been similarly explored.

Offer More Visas to People Coming Across the Southern Border 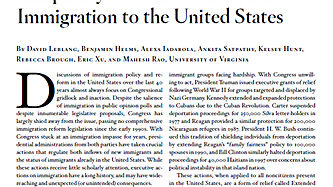