Seattle requires that residential landlords give potential tenants a 48‐​hour right of first refusal in the order in which they applied to lease a property. Once the listing is up, the landlord has no discretion to choose who occupies their property, whether the first‐​in‐​time is an avowed white supremacist or simply makes the landlord uncomfortable. Several landlords—most of whom are ordinary people who own only a handful of rental units—claim the ordinance violates their fundamental right to alienate or lease property and therefore is an unconstitutional taking of private property without just compensation.

The Washington Supreme Court concluded that Seattle’s first‐​in‐​time rule does not violate the Fifth Amendment’s Takings Clause. Washington’s high court applied a Supreme Court case called Penn Central to the question, which established a complex text for so‐​called “partial regulatory takings.” Penn Central looks to the property owner’s investment‐​backed expectations, the law’s economic impact, and the character of the government action to determine if a taking occurred. It is a test that has rightly been criticized as ad hoc and difficult to apply.

Property is “a bundle of sticks,” the saying goes. Legally, owning something is a complex question. Some things you own but can’t sell, such as prescription drugs. Other things you can give away but not sell—hunted game meat in many states, for example. You lack those “sticks” in the bundle. The rights that you have in a piece of property—the right to possess, to sell, to give away, to lease, to develop, etc.—are said to be the bundle of sticks you have for that property. Sometimes, the Supreme Court has subjected the taking of some sticks in the bundle to a bright‐​line test, but other sticks in the traditional bundle of property rights are not so lucky. For those less protected rights, the Court still follows Penn Central’s lead, analyzing the incremental economic impact of a regulation rather than asking whether it simply crosses a line to deprive an owner of the right to exclude, for example, or, in this case, the right to lease.

The right to exclude unwanted tenants is an important right to a landlord. Such rights are the sine qua non of property ownership: my house, my rules. Perhaps you want to kick someone out of your party because you don’t like the look on his face. You can do that, and you don’t have to answer to anyone. Seattle’s interference with such a fundamental right should not be subject to a test that tries, half mathematically and half by hunch, to balance the economic costs and benefits of the regulation in question. This is exactly the sort of situation that merits a bright‐​line analysis.

Cato, joined by the Reason Foundation, have filed a brief in support of the property owners’ petition to the Supreme Court. We urge the Court to limit Penn Central to regulations that do not clearly deprive the owner of a fundamental attribute of property. We offer several examples from the Court’s past that show a willingness to draw bright‐​line rules when fundamental property rights are taken. Once considered separately, it would be quite simple for the Court to determine whether a given regulation is a taking of this or that stick in the bundle.

We’ve also asked the Court to consider the social and economic costs of rejecting petitioners’ takings claim. As housing regulations become more onerous and complex, it will prove more difficult for small landlords to keep up. Urban real estate markets will become even more dominated by large, commercially sophisticated landlords who can afford to navigate the regulatory environment. Costs of living will increase, pushing out lower‐​income residents. This in turn will reduce economic and cultural diversity.

If other cities are given the green light to replicate Seattle’s efforts, they will likely experience similar losses. Even for commercially sophisticated landlords, compliance costs would remain high, and would be reflected in ever‐​increasing rents. In cities where such increases are limited by rent controls, the profit crunch could thus reduce real‐​estate competition, reducing the quality of construction, maintenance, and amenities to the absolute regulated limit.

The Court should take the case and clarify and limit the long‐​confusing Penn Central test. Losing the right to exclude unwanted tenants is not just about economics and “investment‐​backed expectations”; it is a fundamental attribute of property ownership.

COVID and Churches Go to the Supreme Court 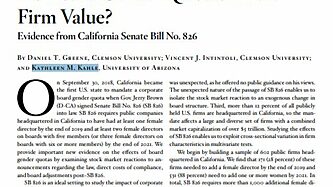 Taking a Hard Look at DHS v. Regents of the University of California