The U.S. government requires most foreigners to obtain a travel visa if they wish to travel to America. The purported rationale for this requirement is to prevent unauthorized immigrants, terrorists, and other foreign‐​originated security threats from coming into the country disguised as tourists. The visa requirements also impose a substantial cost on the American economy by severely inhibiting tourism to the United States. Many sectors of the American economy are heavily dependent on tourist spending. By making it unnecessarily costly and difficult for foreigners to visit the country, the United States is impeding economic growth that would occur under a more sensible visa policy.

Background on Tourists to America
In 2012 there were 42,025,488 temporary visitors for pleasure (tourists) to the United States.1 The visa process for most would-be tourists is unnecessarily arduous. Suppose a reasonably affluent Brazilian family was interested in visiting Disney World in Florida. First they must fill out the DS-160 online application. Then they must pay a $160 application fee per visa and perform two separate interviews, one of which requires invasive questions and fingerprinting. The interviews typically must take place at an American embassy or consulate, of which there are only four locations in all of Brazil—a country as big as the continental United States—meaning that many of the Brazilian applicants will have to travel for the interview. While visas may take only 10 days to process, delays are common, and the United States government recommends not making travel plans until receiving the visa. To make matters even more uncertain, consular officials can stop the process at any moment and deny the family a visa without reason.

The Economic Cost of Tourist Visas
Eliminating all travel visas to the United States could increase tourism by 45–67 million visitors annually, corresponding to an additional $90–123 billion in tourist spending.3 A comparison of visa requirements for tourists across 188 countries4 reveals that the imposition of tourist visas on a source country by a destination country decreases the quantity of tourists by about 70 percent.5 Conversely, this projection implies a nearly three-fold increase in tourist travel if the travel visa requirements are removed.6

These estimates control for many different characteristics of the countries, including populations, locations, incomes, economic and political institutions, and the prevalence of tourist attractions, and are consistent with similar previous findings.7

Table 1 lists the countries upon which United States visa restrictions have the greatest impact and provides the estimated number of tourists the country could expect if the visa requirements were lifted. 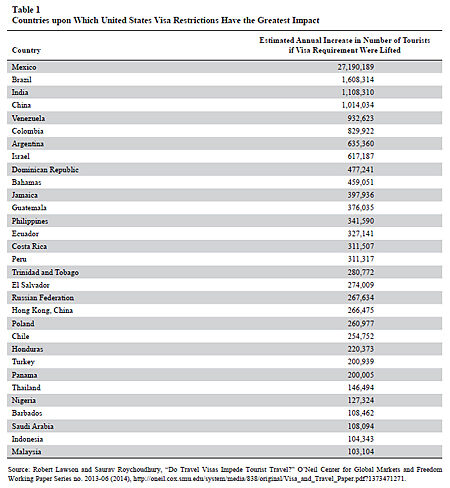 Reforming Tourist Visas
There are steps the United States could take right now to drastically reduce the burden of visas, thereby boosting the American tourism industry. For instance, the Visa Waiver Program (VWP) offers a way for citizens of 37 countries to travel to the United States for up to 90 days without a visa. There are many countries whose citizens pose a nonexistent to limited security threat to the United States, such as Poland, Ecuador, and the Thailand. Those countries should be moved into the VWP immediately. As for concerns about unauthorized immigration, nations that do not have much of a history of sending unlawful immigrants in large numbers, like Brazil and Argentina, should also be added to the VWP.

For countries still not part of the VWP or unlikely to be added, there are other steps that would help make the visa process less burdensome. Tourists must now prove "nonimmigrant intent" to receive a visa according to section 214(b) of the Immigration and Naturalization Act. The serpentine path potential tourists must follow to do so, like getting a letter from their employer stating that they intend to return, documenting proof of property ownership, and so on, all the while negotiating with the standard obstinacy of a government bureaucracy, imposes great burdens. Relaxing section 214(b) requirements would lower the cost of getting a tourist visa without extending the VWP.

Reciprocity offers another policy path for reforming tourist visas. As a guiding principle, the United States should not demand visas for tourists from any country that does not demand visas for American citizens. Reciprocity has worked well in reducing international trade barriers; it could also be used to bring down barriers to the movement of people. This would significantly reduce the impact of immigration bureaucracy in a straightforward, transparent, and cooperative way.

Under a reciprocity scheme, Mexicans, Central Americans, and people from the Caribbean would immediately be able to travel to the United States without a tourist visa. While that would produce the best economic results, it could lead to a large increase in unauthorized immigration. The United States could phase in tourist visa reciprocity with nations that do not have a history of sending many unauthorized immigrants or that do not present security threats. Tourists from Malaysia, Botswana, Mongolia, Uruguay, and Georgia—nations that do not require Americans to obtain visas before visiting—could be allowed to enter without a visa to begin with, phasing in other nations depending on the success of those liberalizations. If the American authorities grow confident in their ability to limit visa overstays or the possibility of unauthorized immigration is greatly reduced, reciprocity could eventually be phased in with Mexico, Central American countries, and Caribbean nations as well.

The case of Mexico deserves special mention beyond reciprocity. Removing visa requirements on Mexicans would allow for the greatest numbers of tourists to come to the United States—over 27 million more annually according to our estimates—but concerns surrounding unauthorized immigration and security make tourist visa reform with Mexico especially difficult. Unauthorized immigration from Mexico is near net-zero because of rising Mexican incomes and diminished American economic demands for low-skilled workers.8 Reduced unauthorized immigration combined with the likelihood of immigration reform in the near future will open up more possibilities for lessening tourist visa regulations with an eventual goal of accepting them in the VWP.

Conclusion
Tourism is the economic equivalent of exports. When foreign travelers spend their money in the United States, it is no different than when they reside in a foreign country and buy American produced goods. Just as export restrictions are economically destructive, tourist visa policies that raise the price of travelling to the United States prevent wealth-maximizing international economic exchanges from occurring. Travel visas actively discourage people from buying this important United States export to the detriment of America's economy.