Well, it’s official. President Obama has picked Janet Yellen as his nominee to be the next Federal Reserve Chairman. In the months leading up to this announcement, the press unanimously dubbed Yellen the Queen of the Doves, pointing to her reluctance to roll back the Fed’s Quantitative Easing program. As it turns out, however, Yellen is hardly the dove she is made out to be. Indeed, when it comes to money supply, Dr. Yellen seems, well, downright hawkish.

Traditionally, the dove label has referred to an emphasis on the Fed's mandate to pursue full employment (even at the expense of slightly higher inflation), while the hawk label has referred to a focus on the Fed's price stability mandate. In practice, however, the dove-hawk distinction typically comes down to a question of the money supply: to increase, or not to increase?

First, we must define what measure of the money supply we are talking about. While it is true that the Fed has turned on the money pumps in the wake of the 2008 crisis, the Fed only directly controls what is known as state money, also known as the monetary base, which includes currency in circulation and bank reserves with the Fed. The vast majority of the money supply, properly measured, using a broad metric, is what is known as bank money. This is money produced by the private banking sector via deposit creation, and it includes liquid, money-like assets such as demand deposit and savings deposits.

The Fed has indeed been quite loose when it comes to state money, with the state money proportion of the total money supply increasing from 5% of the total before the crisis, to 19% today (see the accompanying chart). 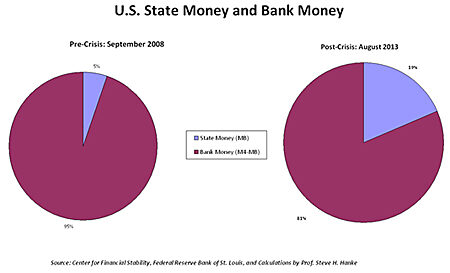 Given Yellen’s support for continuing the Fed’s interest rate and easing policies, it would appear that, when it comes to state money, Yellen is indeed a dove. But, where does Yellen stand on the other 81% of the money supply? To answer this question, we must look not to her stance on monetary policy, per se, but rather on financial regulation.

For some time, I have warned that higher bank capital requirements, when imposed in the middle of an economic slump, are wrong-headed because they put a squeeze on the money supply and stifle economic growth. Thus far, the result of efforts to impose these capital requirements has been financial repression — a credit crunch. This has proven to be a deadly cocktail to ingest in the middle of a slump.

In the aftermath of the financial crisis, politicians, regulators, and central bankers around the world (including Yellen) have pointed their accusatory fingers at commercial bankers. They assert that the keys to preventing future crises are tougher regulations and more aggressive supervision, centered around higher capital requirements for banks.

This would be fine if higher capital requirements were being imposed during an economic boom, because capital hikes cause money supply growth to slow, which tends to cool down the economy. But, when capital hikes are imposed during a slump, they become pro-cyclical and actually make things worse. Indeed, the imposition of higher capital requirements in the wake of the financial crisis has caused banks to shrink their loan books and dramatically increased their cash and government securities positions.

Even the International Monetary Fund (IMF) and the Paris-based Organization for Economic Co-operation and Development (OECD) quietly acknowledge that this will hamper GDP growth and raise lending rates. But, thus far, they have failed to fully assess the negative impact of raising capital requirements during an economic slump. The problem is that they are not properly focused on the money supply. Indeed, when viewed in terms of money — bank money, to be exact — the picture comes into sharp relief.

For a bank, its assets (cash, loans and securities) must equal its liabilities (capital, bonds and liabilities which the bank owes to its shareholders and customers). In most countries, the bulk of a bank’s liabilities (roughly 90 percent) are deposits. Since deposits can be used to make payments, they are “money.” Accordingly, most bank liabilities are money.

The United States, with Yellen’s blessing, has employed a loose state money/tight bank money monetary policy mix. Yes, for all the talk of QE3 and Fed’s loose monetary policy, the inconvenient truth is that the overall money supply in the U.S., broadly measured, is still, on balance, quite tight — thanks in large part to ill-timed bank capital hikes. With bank money making up 81% of the total U.S. money supply, broadly measured, it should come as no surprise that the U.S. is actually registering a money supply “deficiency” — 6.5% to be exact (see the accompanying chart). 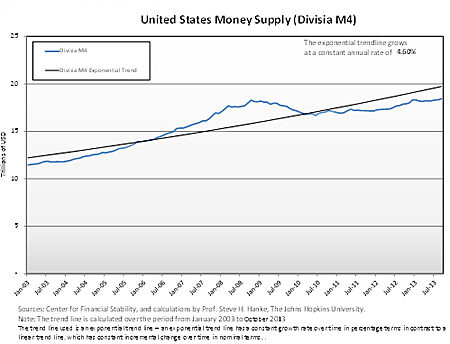 Yes, the shrinkage in bank money has far outstripped the Fed's efforts to boost state money. In consequence, the money supply is only 2.6% above its pre-crisis peak, and still sits well below the trend-rate level. This is bad news for the real economy, particularly the labor market, as money supply growth and unemployment are tightly linked (see the accompanying chart). 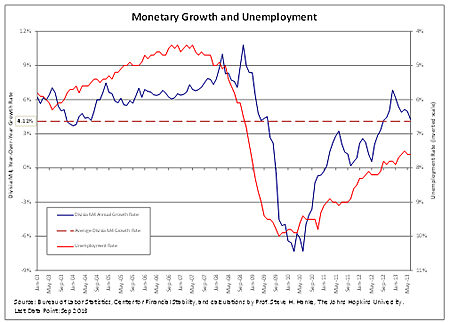 If Yellen were truly a dove, she would have been advocating laxity in bank capital requirements and supervision, not stringency. Alas, despite the massive regulatory burden that has been heaped upon the banking system by the Basel III and Dodd-Frank regulatory regimes, and the repeated capital hikes that have been imposed on banks by domestic and international regulators, Yellen is not satisfied. Indeed, she calls this effort "unfinished business.”

These are clearly not the words of a dove, properly understood. Indeed, on the issue of bank regulation — specifically its effect on bank money — the Queen of the “Doves” has unfortunately sipped the same Kool-Aid being served in the current Chairman’s office.