Last week Secretary of State Mike Pompeo testified before the Senate Foreign Relations Committee that U.S. policy toward North Korea continues to be based on complete denuclearization. Unfortunately, this goal is a fantasy which ensures that the administration will continue to achieve nothing involving the Korean peninsula, other than extending the existing military confrontation.

The three‐​decade anniversary of the start of Korea’s nuclear crisis, which began under the George H.W. Bush administration, is approaching. Washington’s position always has been complete, verifiable, irreversible denuclearization (CVID).

Washington’s stubbornness on this point triggered a bitter confrontation between the Democratic People’s Republic of Korea (DPRK) and the U.S. under the Clinton administration. War became a real possibility, though how close is a matter of dispute. The opening assault would have been on the DPRK, but the ensuing combat would involve the Republic of Korea, which would have suffered the brunt of North Korean retaliation.

Washington needs a reality check if it is to craft sound policy when dealing with Pyongyang.

In 1993 President Bill Clinton formed a Pentagon task force that recommended military action against the North’s Yongbyon nuclear facilities. Secretary of Defense William Perry, assisted by Assistant Secretary of Defense Ashton Carter, who later served as defense secretary in the Obama administration, drafted the war plans. Perry predicted victory—“Of course, with the combined forces of the ROK and U.S., we can undoubtedly win the war”—but admitted that “war involves many casualties in the process.” He expected “a spasmodic lashing out by North Korea’s antiquated, but large and fanatical, military across the DMZ.”

In his memoirs, South Korea’s then‐​president, Kim Young‐​sam, said that the Clinton administration was prepared to put its plan into action in 1994. He wrote that he talked Clinton out of the plan, recounting his warning that airstrikes “will immediately prompt North Korea to open fire against major South Korean cities from the border.” This likely would have triggered a full‐​scale war that would have destroyed the South’s capital of Seoul and much more of his country.

President Jimmy Carter’s last‐​minute mission to the North set in motion negotiations that led to the Agreed Framework. Whether the pact might have ultimately yielded denuclearization if the DPRK’s Kim Il‐​sung had not died—two weeks before he was scheduled to meet Kim Young‐​sam. Moreover, things might have gone better if congressional Republicans had not starved the arrangement of funding and President George W. Bush had not repudiated the pact. Now, however, it is impossible to know. Any promise by Pyongyang should be treated with great skepticism, but the United States contributed much to the Agreed Framework’s breakdown. And the North could have no confidence in dealing with an administration which labeled North Korea a member of the “Axis of Evil” and invaded another of that grouping, Iraq, which had abandoned its nuclear program.

Once Pyongyang’s efforts bore nuclear fruit, CVID unequivocally became a dead letter. Knowledge, once acquired, cannot be eliminated. Moreover, though economic benefits and security assurances might be a reasonable payment for eliminating the unproven possibility of developing nuclear weapons, the price after demonstrating the ability to produce nuclear bombs inevitably would be much higher.

Moreover, the DPRK, a small, impoverished, and otherwise unimportant nation, quickly discovered the extraordinary leverage acquired through its successful nuclear program, dominating global headlines when it began moving down the nuclear path. The prospect of possessing a nuclear arsenal also presented opportunities for extortion, particularly from South Korea, which developed the “Sunshine Policy,” which transferred billions of dollars to the North.

Perhaps even more important, the development of nuclear weapons created interest groups, most notably in Pyongyang’s military and scientific elites, dedicated to the program’s continuation and expansion. Nuclear weapons became an important reward for the one organization, the armed forces, that could challenge party authority. Indeed, Kim Jong-il—Kim Il-sung’s son and successor—declared a “military first” policy and shifted authority from the Korean Workers’ Party to the National Defense Commission. Repudiating this process would have been politically dangerous.

What had to be a slim chance of convincing the North to abandon its nuclear program diminished to near‐​nothingness as Washington directed its military to go about the globe bombing, invading, and occupying other nations at will. Particularly dramatic, and educational for the North, was America’s treatment of Iran and Libya.

In the aftermath of the Iraq invasion, Tehran indicated its willingness to negotiate all issues of interest, including its nuclear program. The Bush administration, in full hubristic thrall after ousting Saddam Hussein, refused, as neoconservatives urged war against Iran. The Islamist regime responded by speeding up nuclear research and reprocessing activities, leading the Obama administration to face negotiations with a much‐​strengthened Iranian regime.

The Bush administration decided to talk with Libya’s Muammar Gaddafi, who abandoned his nascent missile and nuclear programs in exchange for the sweet nothings whispered in his ear by Western officials. When a popular revolt erupted a few years later, however, the Obama administration joined with European governments to oust him, with his unpleasant end captured on YouTube.

Kim Jong‐​un appears to seriously desire economic development, which requires eliminating or relaxing sanctions. However, he would be a fool to trust Washington and especially the Trump administration, which repudiated the nuclear pact with Iran. He certainly won’t give away all his leverage by sacrificing his nuclear program before receiving any benefits. And given the ill‐​treatment of his fellow dictators, even an attractive denuclearization offer likely won’t convince him to not keep at least a residual deterrent to prevent a Gaddafi‐​repeat.

Indeed, the Washington, D.C. policy community seems bereft of anyone who imagines that CVID is possible. The president may be the only person in the capital who believes “Chairman Kim” is prepared to turn over his nukes. The views in Seoul appear to be similar. President Moon Jae‐​in acts as if that goal is attainable, but I have yet to find a South Korean policy analyst or diplomat who privately admits to thinking that full denuclearization is remotely possible. Calling for CVID has become an empty reflex.

Unfortunately, the pursuit of denuclearization is a prime example of the perfect becoming the enemy of the good. Demanding that the North give up everything is a nonstarter. Kim will make empty promises in hopes of receiving some benefits along the way. The United States will refuse to provide any inducement, even for actions that would make the peninsula safer and more stable. Hence the present impasse between America and DPRK after two summits.

Policymakers in the United States and ROK insist that it is impossible to abandon the call for denuclearization, no matter how unrealistic. No one wants to be embarrassed by admitting failure. Nor by suggesting acceptance of the North as a nuclear power. And certainly not by encouraging other states, starting with Iran, to similarly seek official nuclear status.

All understandable objections, but the bloody‐​minded yet ultimately futile opposition to India’s and Pakistan’s acquisition of nuclear weapons yielded nothing but frustration and hostility. Nonproliferation advocates were horrified when the Bush administration regularized relations with New Delhi, but the alternative approach was braindead, awaiting burial. Even then, it was evident that India could become an important counterweight to a rising China in the future. Today an increasingly powerful and engaged India may become one of the most important balancers against a potentially aggressive Beijing.

Thus, policy toward the DPRK requires a practical if not rhetorical shift. While the United States and other nations might still speak of denuclearization, they should adopt a policy of arms control. And seek to reduce the threat posed by whatever armaments the North possesses. That is, make small deals involving both nuclear and conventional arms, with partial sanctions relief offered as one, and perhaps the most important, inducement. Such steps also would move along a mythical path toward CVID, ever ready to take advantage should the Second Coming occur, eternal peace emerges, and the lion unexpectedly lies down with the lamb.

Trump doubtless desires denuclearization. However, is he willing to negotiate seriously for anything less? The answer to that question will determine whether there is any hope of a deal between North Korea and the Trump administration, even if its tenure extends beyond next January 20th. 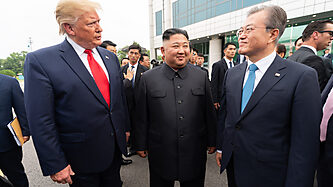 America Must Come to Terms With North Korea’s Nuclear Weapons

Why South Korea Must Chart an Independent Path on North Korea