My last column “Regime Uncertainty Weighs on Growth” (October 2014) stressed that market participants do not know what the Big Players (Read: governments and central banks) will do next. This regime uncertainty is creating an economic undertow. No wonder there have been so many recovery false dawns.

In the past month, markets have become very volatile. Equity and oil markets are the most notable. Why? Well, regime uncertainty continues to be ramped up. Indeed, Berlin-bashing by Paris and Rome over fiscal austerity has become the latest political rage. On top of that, weak economic data from the Continent and a spat of surprisingly weak U.S. data moved the world's stock markets. If that wasn't enough, there were some so-called mixed economic signals emitted from China. We must not forget the International Monetary Fund's (IMF) World Economic Outlook report that was unveiled at the World Bank — IMF meetings in Washington, D.C. The report contained a major policy flip-flop, switching mantras from fiscal austerity to fiscal stimulus. The volatility mixer was stirred further when the Saudis clarified that they would not cut back on oil production to prop up crude prices. The Kingdom wants to retain, or increase, its market share. To top it off, Ebola has reared its ugly head. All of this confirms what I call the School Boy's Theory of History: it's just one damn thing after another.

Let's examine some of these factors to see just how they contribute to the world of volatility. The relatively weak U.S. economic data are no surprise. The best proxy for nominal aggregate demand is measured by final sales to domestic purchasers (FSDP). Nominal FSDP has never recovered to its longrun trend of 5% since the crisis of 2009. Indeed, aggregate demand is growing at an anemic year-over-year rate of only 3.9%.

Anyone who is properly informed about the economics of money and banking knows why nominal aggregate demand has not bounced back to a trend rate of growth. The money supply, correctly measured by Prof. William A. Barnett's Divisia M4, is only growing at a year-over-year rate of 2.0%. Money fuels the economy and without fuel, the economy eventually stalls.

In the U.S., bank regulations since the collapse of Lehman Brothers have been ill-conceived, draconian, and pro-cyclical. In consequence, bank money has shrunk in both relative and absolute terms since 2009 (see the accompanying chart). This has forced the Federal Reserve to engage in a massive quantitative easing program. As the chart shows, the state money produced by the central bank has exploded, growing from less than 10% of M4 to 21.7%. But, since bank money is the elephant in the room, the growth in total broad money has been slow. Therefore, it's predictable that there is weak nominal growth and a very low inflation rate in the U.S. 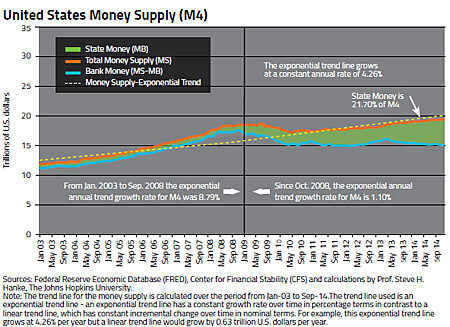 The state of money and banking in Europe is even more problematic than in the U.S. Regulators on the Continent have made a strong push to force banks to deleverage, which is why private credit has been contracting in the Eurozone for over a year (see the accompanying chart). Presently, the authorities have an army of approximately 6,000 bureaucrats combing through 135,000 loan files at 130 of Europe's largest banks. This is all part of Europe's stress test exercise. The main goal is to make Europe "safe" from bankers and banks. Bankers who have been covering up bad loans will be discovered and taken to the woodshed; zombie banks will be liquidated or recapitalized. If that is not enough, the Single Supervisory Mechanism, a pan-European bank regulator, will be unveiled, on November 4th. This will usher in stress tests as far as the eye can see (Read: tight bank money). 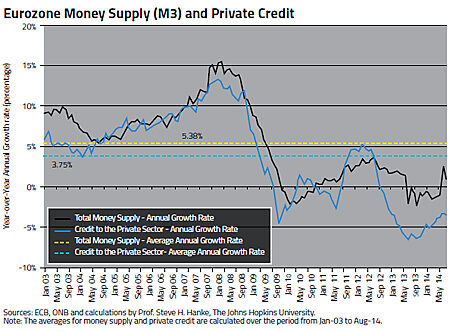 There has been a great deal of non-sense coming from the Continent, too. French President Hollande and Italian Prime Minister Renzi, as well as their followers, have been shouting from the rooftops that Europe has had enough fiscal austerity. They claim that austerity is killing economic growth.

Most of their rhetoric is aimed at Germany, a country in which fiscal austerity is a hallmark. Well, the anti-austerity rhetoric does not match reality. The accompanying chart shows that government expenditures in all but five of the countries in the European Union have seen their government expenditures as a percent of GDP rise since 2007. It is interesting that all of the countries that witnessed real fiscal austerity were former communist states. And two of them (Bulgaria and Lithuania) were countries in which I installed currency boards to discipline monetary and fiscal operations. So, where is all the austerity that Messrs. Hollande, Renzi, and company are screaming about? 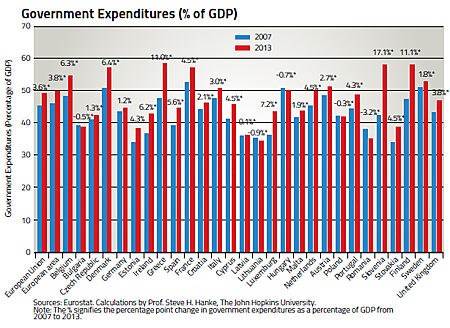 Turning to China, we see that the authorities understand money. They have kept the supply growing at close to a trend rate for some time (see the accompanying chart). Yes, the money supply measured by M2 is currently a bit below trend. That's why the recent injection of 200 billion yuan ($32.8 billion) into twenty of China's largest banks is no surprise, and why China's third quarter growth of 7.3% beat the consensus forecast of 7.2%. 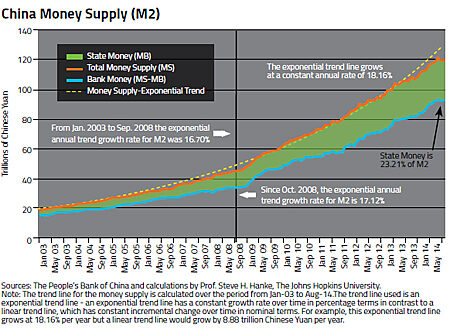 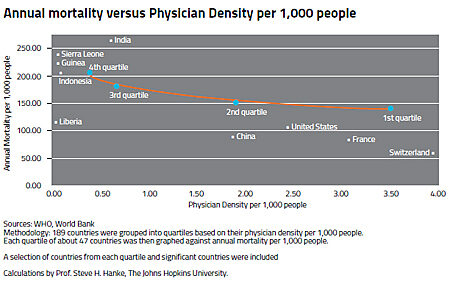 As it turns out, the three countries in which Ebola is concentrated — Guinea, Liberia, and Sierra Leone — have few doctors. This is a bad sign since there is little indigenous capacity to fight the disease. And that's not all, the governments in these three countries have virtually no capacity to deliver much of anything. Indeed, the World Bank's Worldwide Governance Indicators Project reports on six broad measures of government effectiveness for 215 countries. Let's look at a country's "Government Effectiveness," which is a broad aggregate that includes public perception of the quality of civil service and government credibility. In 2013, the most effective governments were Finland, Singapore, Denmark, and Sweden. In contrast, Liberia's government is only more effective than 8.6% of all the governments in the world. Guinea and Sierra Leone were not much better, with percentile rankings of 9.1% and 12.4%, respectively. These data suggest that an indigenous solution to the Ebola crisis is not in the cards.

Most outside governments, as well as the United Nations' World Health Organization (WHO), have displayed a great deal of incompetence in addressing the Ebola crisis. The only exception seems to be the capable Médecins Sans Frontières, which is also known as Doctors Without Borders. Welcome to the world of volatility.