My Misery Index for 2016 placed Venezuela at the unenviable top spot: the world’s most miserable country. However, to gain a real appreciation of the depths of Venezuela’s socialist disaster, we must look under the hood of Petróleos de Venezuela (PDVSA), Venezuela’s state‐​owned oil giant. After all, PDVSA is, for all practical purposes economically, Venezuela. Indeed, PDVSA accounts for virtually all of Venezuela’s foreign exchange earnings (93% over the past 5 reported years).

Given the incredibly low rate at which PDVSA is depleting its reserves, Venezuela’s reserves — the world’s largest — are essentially worthless

An understanding of the workings of PDVSA requires a good grasp of petroleum economics, a field I was introduced to many years ago, when I was on the faculty of the Colorado School of Mines, and where I taught both petroleum and mineral economics. It was then that I had the good fortune to be befriended and mentored by the world’s greatest petroleum economist, the late Prof. M. A. Adelman of the Massachusetts Institute of Technology. I mention this because it is only by learning Adelman’s lessons that we can make sense of the dodgy accounts of what is undoubtedly the world’s worst oil company: PDVSA.

The extent of PDVSA’s mismanagement can be seen by taking a look at its production and reserve figures. Under the direction of Luis Giusti in the 1994-98 period, PDVSA’s production soared. But, that boom was cut short. In 1999, the socialist fire-brand Hugo Chavez became Venezuela’s president and introduced Chavismo. With that, PDVSA’s oil output started a downward slide (see the chart below). That slide became a plunge after the coup attempt of April 2002. It was then that Chavez purged PDVSA of its professionals en masse and replaced them with “reliable” hands — those who worshiped at Chavez’s altar. 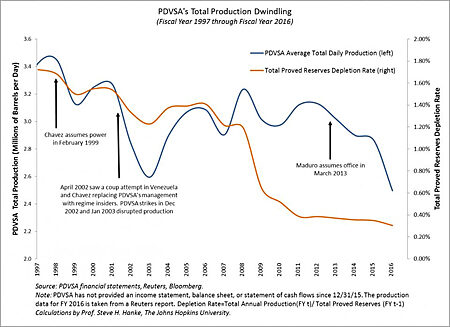 After the 2002-03 output plunge, PDVSA's production recovered somewhat. But, with the death of Chavez and the assumption of the Presidency by Nicolas Maduro in March 2013, another output plunge began. It has left PDVSA's output 20% lower than when Chavez took power in 1999. While the course of PDVSA's output tells us something, it doesn't necessarily tell us much. After all, production can be reined in for many reasons.

To determine whether PDVSA's output drop is deplorable or not, we must look at the company's proven reserves and the rate at which they are depleted. The depletion rate, which is determined by dividing annual production in any given year by the proven reserves in any given prior year, provides a key to understanding the economics of an oil company and the value of its reserves. As the chart above shows, PDVSA's depletion rate has been falling like a stone since 2007. At present, it sits at 0.35%. That rate implies the median time to extraction and sale for a barrel of PDVSA's oil is 198.6 years.

What are the economic implications? Because of positive time preference and discounting, the value of a barrel of oil in the ground depends on the time taken to get it above ground. If, for example, the price of oil remains the same, a barrel of oil produced and sold today is worth more than a barrel produced and sold tomorrow. Given the incredibly low rate at which PDVSA is depleting its reserves, Venezuela's reserves — the world's largest — are essentially worthless. 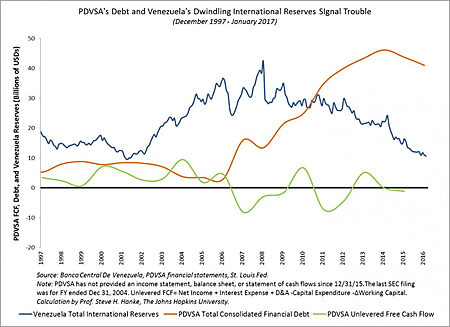 To put PDVSA’s depletion rate into perspective, let’s compare it to Exxon’s. At the end of 2015, Exxon’s depletion rate was 8.15% — which is comparable to most of the world’s major oil companies. That rate implies Exxon's median time to extraction (and sale) for a barrel of oil is 8.2 years. That’s 190 years earlier than PDVSA would realize revenue from selling a barrel of oil. Given the rate at which Exxon is depleting its reserves, they are worth something. Indeed, if we discount at 10%, Exxon’s reserves are worth 46% of the well-head value. Not zero, as is the case for PDVSA.

So, with the way PDVSA operates, it is exploiting reserves so slowly as to render them, on average, worthless. If that’s not bad enough, PDVSA is generating negative cash flows and piling up a mountain of debt (see the chart above). The arithmetic does not look good. PDVSA faces $10 bil. in interest and principal payments this year, but reports estimate that PDVSA only has $2 bil. in cash to service its debt obligations. In principle, the government could come to the rescue. But, its stated reserves have dwindled to below $10.5 bil.

It’s clear that PDVSA is in a death spiral, which brings to mind the memorable words of former President George W. Bush, “this sucker could go down.”