The rule of law subjects the State to a fixed set of rules that limits the scope of its coercive powers. Individuals and their property are protected from the arbitrary, ad hoc actions of the State and other individuals. In consequence, individuals can plan their activities within the confines of known, fixed “rules of the game.” This allows people to pursue their personal ends, as long as their actions do not infringe on the broadly‐​defined property rights of their fellow citizens.

When properly applied, the rule of law guarantees freedoms in the economic, political, intellectual and moral spheres. In the economic sphere, money constitutes an important element. The great Austrian economist Ludwig von Mises dealt at length with this issue in The Theory of Money and Credit, which was published originally in 1912:

“It is impossible to grasp the meaning of the idea of sound money if one does not realize that it was devised as an instrument for the protection of civil liberties against despotic inroads on the part of governments. Ideologically it belongs in the same class with political constitutions and bills of rights. The demand for constitutional guarantees and for bills of rights was a reaction against arbitrary rule and the non‐​observance of old customs by kings. The postulate of sound money was first brought up as a response to the princely practice of debasing the coinage. It was later carefully elaborated and perfected in the age which—through the experience of the American Continental Currency, the paper money of the French Revolution and the British Restriction period—had learned what a government can do to a nation’s currency system.”

Today, Venezuela has at best a tenuous grip on the rule of law. This is nowhere more visible than in the monetary sphere. The country’s foreign exchange reserves are falling like a stone (see the accompanying chart). 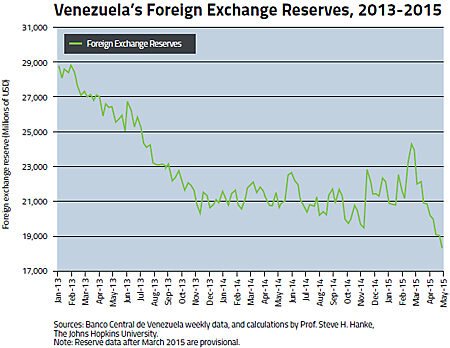 Relative to the mighty U.S. dollar, Venezuela's currency, the bolivar, is also falling like a stone. Indeed, it has lost 47% against the greenback just since the start of the year (see the accompanying chart). 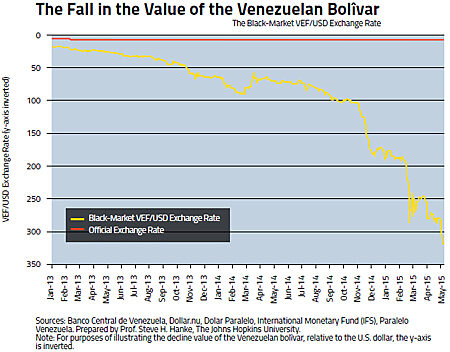 As night follows day, inflation has soared as the bolivar has plunged. I estimate Venezuela’s annual inflation rate at 335%. That’s the highest rate in the world. For those holding bolivars, it amounts to: “no rule of law, bad money.” It is worth noting that currency debasement and inflation robbery were not always the order of the day in Caracas. During the decade of the 1950s, the average annual inflation rate was only 1.7% — not much above Switzerland’s. In the 1960s, inflation in Venezuela fell to a 1.2% average annual rate. It wasn’t until the 1980s that Venezuela experienced a decade of double-digit annual inflation. Today, inflation, contrary to the official numbers and amateur estimates, has soared well into triple-digit territory.

It’s time for Venezuelans, as well as many others, to dollarize.

To calculate the inflation rate in Venezuela, all that is required is a rather straightforward application of a standard, time-tested economic theory (read: PPP). Using black-market exchange rate data that The Johns Hopkins-Cato Institute Troubled Currencies Project has collected over the past year, I estimate Venezuela’s current annual inflation rate to be 335% (see the accompanying chart). 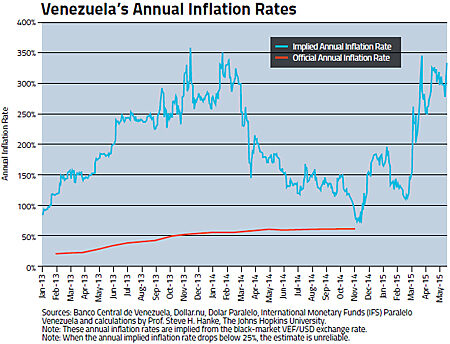 Ecuador, where I served as the chief advisor to the Minister of Finance, when that country dollarized, offers some lessons that merit Caracas' attention.

Ecuador represented a prime example of a country that was incapable of imposing the rule of law and safeguarding the value of its currency, the sucre. The Banco Central del Ecuador was established in 1927, with a sucre-U.S. dollar exchange rate of 5. Until the 1980s, the central bank periodically devalued the sucre against the dollar, violating the rule of law. In 1982, the central bank began to exercise its devaluation option with abandon. From 1982 until 2000, the sucre was devalued against the dollar each year. The sucre traded at 6,825 per dollar at the end of 1998, and by the end of 1999 the sucre-dollar rate was 20,243. During the first week of January 2000, the sucre rate soared to 28,000 per dollar.

In the case of Ecuador, the inability of the government to abide by the rule of law was, in part, a consequence of traditions and moral beliefs. Ecuadorian politics have traditionally been dominated by elites (interest groups) that are uninhibited in their predatory and parochial demands on the State. With the lack of virtually any moral inhibitions, special interest legislation was the order of the day. For example, during the rout of the sucre in 1999, laws were passed that allowed bankers to make loans to themselves. In addition, state guarantees for bank deposits were introduced. These proved to be a deadly cocktail, one that allowed for massive looting of the banking system's deposit base. This, as well as the collapsing sucre, enraged most Ecuadorians.

With the rule of law (and the sucre) in shambles, President Mahuad announced on January 9, 2000 that Ecuador would abandon the sucre and officially dollarize the economy. The positive confidence shock was immediate. On January 11—even before a dollarization law had been enacted—the central bank lowered the rediscount rate from 200% a year to 20%. But, this newfound ray of hope was threatening to some, and during a 24-hour period (January 21–22), a coup d'état ensued. While the Mahuad government was toppled, the coup was a bungled affair and the former Vice President Gustavo Noboa assumed the Presidency. He honored Mahuad's dollarization pledge. On February 29, the Congress passed the so-called Ley Trolebus, which contained dollarization provisions. It became law on March 13, and after a transition period in which the dollar replaced the sucre, Ecuador became the world's most populous dollarized country on September 13.

With much the same enthusiasm as Ecuador's coup plotters and the rigidity of a dogmatic cleric, the critics of dollarization condemned it as something akin to voodoo economics. Well, the critics have been predictably proven wrong.

The misery index is an objective measure of just how well dollarization has worked. The index is equal to the sum of the inflation rate (end of year), bank's lending interest rates and unemployment rate, minus the actual percentage change in GDP per capita. Simply put, a high index means higher misery.

In Ecuador, prior to the implementation of dollarization in 2000, the country sustained a misery index of over 120. The public suffered greatly from inflation, but after dollarization was implemented, high inflation was stifled and misery drastically fell. The accompanying chart shows the direct link between dollarization and the immediate and sustained decrease in misery. From 2003 through 2014, the misery index in Ecuador has been remarkably constant at around 20 — one of the lowest in Latin America.

Ecuadorians know that dollarization has allowed them to import a vital element of the rule of law — one that protects them from the grabbing hand of the State. That's why recent polling results show that dollarization is embraced by 85% of the population. It's time for Venezuelans, as well as many others, to take note and dollarize.

The Madness of Military Intervention in Venezuela