A big, bold new plan for a radically revised social safety net is sweeping the world. It’s called the Universal Basic Income (UBI). In its pure form, UBI would completely eliminate the current welfare state — a sprawling and bureaucratic morass — and replace it with a single redistributive program that would provide a monthly payment to everyone. Whether rich or poor, all people would get enough money from the government to cover basic needs, like food or shelter. Sound too good to be true? That is what social scientists are trying to figure out and the outcome of that discussion may have a big impact on taxpayers.

Given the profound deficiencies of most state‐​run welfare programs, the world’s shifting demographics, and movement toward automating large sectors of the economy, UBI has become an increasingly appealing idea. Its appeal seemingly transcends ideological divides, with contemporary thought leaders as different as Charles Murray (self‐​professed libertarian at the American Enterprise Institute) and Andy Stern (the left‐​wing president emeritus of the Service Employees International Union) both advocating the adoption of the concept. Each has written books espousing the idea.

Regardless of political feasibility, in an era of rising populism, exercising restraint in advocating for a costlier, more comprehensive welfare program seems essential.

Although the idea feels fresh and new, the history of UBI is an old one. The concept was endorsed by enlightenment figures like the Marquis de Condorcet and Thomas Paine and later, in the mid-twentieth century, it was endorsed by classical liberal economists and philosophers, like Frederick (F.A.) Hayek. The Nixon Republican administration even pushed a version of basic income legislation during its tenure, although it ran into insurmountable opposition when it reached the Senate.

So what led to the idea rearing its head in the modern debate? Modern agitation about the automation of jobs is certainly one of the leading drivers, and recent research on this topic has led to growing anxiety in academic circles. In 2016, a White House Economic report suggested that jobs that pay $20 or less per hour have an 83 percent median probability of automation. Meanwhile, McKinsey research suggests that as many as 45 percent of current paid jobs could be automated by utilizing or adapting current technology. And a 2013 report from Oxford University suggests that 50 percent of jobs could be taken by robots in 10 to 20 years.

Some tech and science voices share these concerns. Moshe Vardi, a computer science professor at Rice University and Guggenheim fellow recently suggested that “We are approaching the time when machines will be able to outperform humans at almost any task.” Elon Musk reiterated the point in a recent CNBC interview where he said that “there’s a pretty good chance we end up with a universal basic income, or something like that, due to automation.”

This is not to say that agreement regarding the threat of automation is universal. For example, MIT economist David Autor suggests that automating repetitive tasks will make complementary skills more lucrative and essential, rather than less. He points to historical examples, like the automated teller machine (ATM) for evidence: in the 45 years since its invention, the number of human bank tellers has roughly doubled. Autor also points out that the fraction of human adults employed in the labor market is higher in 2017 than in 1890, despite the explosion in technological development that’s occurred over the intervening 125 years.

But interest in UBI is not driven just by concerns about rising automation. Many advocates are actually more concerned with social trends. Changes in inequality, upward mobility, flat lining wages for workers, and the weakening ability of higher education to provide job security feature prominently in their writings.

Still other advocates have grown weary of making incremental tweaks to welfare programs that don’t ever seem to yield good results. These supporters are ready for a radical overhaul, and UBI fits the bill.

In response to these concerns, a variety of legislators, academics and philanthropists around the world have become intrigued by the idea and eager to test its viability. In Kenya, a charity called GiveDirectly is testing the idea on 40 villages over a 12-year time horizon beginning in 2017. Meanwhile, in Silicon Valley, California, the largest startup accelerator will provide $1,500 to 100 families from a variety of socioeconomic backgrounds during a pilot experiment later this year. If it’s successful, the study will be scaled. A variety of other nonprofits or research institutes have followed.

Some countries are even sponsoring their own basic income pilot experiments. In Marica, Brazil, the town’s former mayor spent last year piloting a version of UBI for its 14,000 poorest families. Finland is currently in the process of its own UBI experiment, where 2,000 randomly selected citizens will be provided a $630 monthly stipend in lieu of welfare benefits. The city of Utrecht, in the Netherlands, is expected to begin its own study in May 2017.

In many cases, these experiments are nascent or incomplete. In a few cases, they have been completed, but practical differences between experimental treatments and geographic contexts make it challenging to draw concrete conclusions. For these and other reasons, UBI is still more of a thought experiment, and the results of the experiment are more often described in the theoretical.

So, what are the arguments in favor of UBI? Depending on who you talk to, there are a variety of rationales for the idea. For one thing, an idealized UBI effectively sidesteps many of the traditional welfare state’s conventional problems. See figure 1 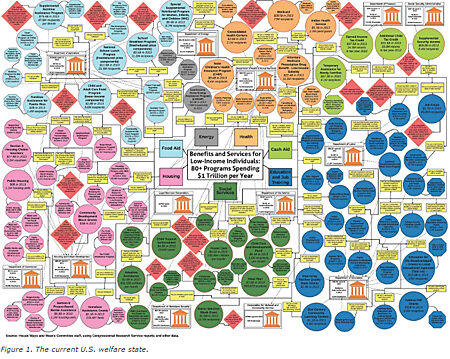 For example, many UBI proposals promise large efficiency gains. These occur both because some or much of the existing welfare state would be eliminated in favor of it, and also because printing checks requires minimal oversight and monitoring as compared to managing a complex welfare system (see Figure 1). Part of the promise of UBI is limiting bureaucracy and dollars lost in transfer.

Closely connected to improvements in efficiency are improvements in transparency and fairness. The current welfare state rewards individuals who learn to “game” a complicated benefits system or individuals with the highest tolerance for standing in line. Under UBI, economically unproductive activities like these produce no additional payoff.

Supporters also tout the soft social benefits of UBI. In theory, because individuals are provided for equally by the state, class division and social isolation would fall. The usual dividing lines between “takers” and “makers” would evaporate. For some people, choices to engage in non-paid work like caretaking or creative ventures would become possible.

UBI also reduces or eliminates the paternalism that is typically a prominent feature of welfare programs. It does this by ending government’s role as the arbiter of eligibility to receive benefits. Under UBI, everyone is equally deserving. Then, once individuals receive their income, it allows them freedom to decide what to do with it: no seafood restrictions on your food stamps, or location restrictions on your housing voucher.

For economists, some of these features recommend the policy. They look at UBI as decision- and utility-maximizing for the individual, as well as a program that avoids the steep benefit cliffs that penalize work. They argue that recipients are always better off with a cash transfer than an in-kind benefit. These benefits, in tandem with a reduction in overhead costs and efficiency improvement, make the idea especially tantalizing.

Although UBI is a departure from traditional welfare, the idea isn’t truly devoid of welfare’s pitfalls. On some fronts, UBI seems not only unable to avoid traditional welfare’s problems, but also likely to exacerbate them. Many of the utopian qualities that recommend UBI to its supporters are strained in the real world.

To begin with, the numbers for UBI don’t seem very feasible — at least not without large tax increases. According to Michael Tanner’s calculations, if the government provided just $12,316 for every individual in the United States, or enough to bring them to the non-elderly federal poverty line, the cost of UBI in the U.S. would be nearly $4.4 trillion, more than the entire U.S. federal budget. In his paper on the topic, he notes that “even if the guaranteed national income replaced every existing anti-poverty program, we would still be some $3.4 trillion short.” In order to make ends meet in this scenario, the tax liabilities of high-income individuals would likely be substantially impacted.

The practical realities of budget constraints inevitably lead advocates — at least in the real world — to consider whether to limit the eligible population to strictly low-income individuals. However, this leaves UBI looking a lot less “universal” and a lot more like your average cash transfer welfare program, which fell out of favor in the U.S. in the 1990s.

Outside of the cost of the program, providing every U.S. citizen with a cash grant is likely to have a large and negative behavioral effect. Economists agree that welfare programs create labor supply disincentives, meaning that individuals reduce work because of government benefits.

As the Congressional Research Service has noted, an “increase in [the value of welfare benefits] is expected to cause people to reduce work hours.” While this is true of all welfare programs, only around 1/5th  of the current U.S. population is currently impacted. If UBI were instituted, labor supply disincentives would touch 100 percent of the population, rather than a subgroup of eligible applicants.

Finally, whether UBI’s promised transparency/efficiency would actually materialize is an open question. The ability to deconstruct programs which benefit legions of special interest groups seems dubious at best. In place of that, the ability to amend the U.S. constitution to direct all redistributive spending through a UBI system, as Charles Murray suggests,  seems ever more unattainable.

When we discuss UBI, we accept a high degree of uncertainty about the details. But those details matter, because the strange bedfellows that support the idea often only favor it under incompatible conditions. For example, while some advocates lend support to the concept contingent on a promise to dissolve the existing social safety net, others maintain that UBI is only acceptable in conjunction with existing programs.

Regardless of political feasibility, in an era of rising populism, exercising restraint in advocating for a costlier, more comprehensive welfare program seems essential. For those that support open society policies like immigration, the provision of a larger benefit package with fewer strings attached is likely to reduce political support for friendly immigration policies. Taxpayers intuitively understand that a comprehensive policy like UBI will place extra pressure on government finances and institutions.

As Milton Friedman stated in his lecture What is America,
“... it is one thing to have free immigration to jobs. It is another thing to have free immigration to welfare. And you cannot have both. If you have a welfare state, if you have a state in which every resident is promised a certain minimal level of income, or a minimum level of subsistence, regardless of whether he works or not, produces it or not, then it really is an impossible thing.”

In public policy, timing is everything. Although UBI is an appealing idea, that alone does not imply it is the right idea given the circumstances. Over the upcoming year, additional research will become available that will help the world form an opinion about UBI’s viability. Both now and then, it is prudent to remain cautious about promises of a panacea in a policy area where there are no easy choices.