At a monetary conference in Vienna back in 2014, the distinguished Frenchman, friend, and occasional collaborator Jacques de Larosière proclaimed that the current world monetary order should be termed an “anti‐​system.” He has a point — an important point. Among other things, such an anti‐​system invites an enormous amount of instability, as well as uninformed loose talk that influences public opinion and policy.

The Chinese yuan has been at the center of much of the recent misinformation and disinformation about currencies. During the first presidential debate between Donald Trump and Hillary Clinton, Trump fingered China as the world’s best practitioner of currency devaluations — devaluations that Trump claims power China’s exports. Clinton didn’t object to Trump’s thesis. Indeed, she boarded the same train.

The facts are that Chinese exports have steadily risen since 1995, but they have not been powered by a depreciating yuan. In fact, the yuan has slightly appreciated in both nominal and real terms. The accompanying chart tells that story. 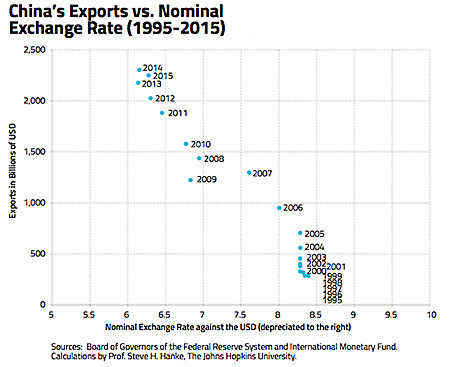 So, what was said about the yuan during the debate is untrue. But, that yuan story is not a debate slip. It is disinformation spread by unions, mercantilist of all stripes, and politicians: Republicans and Democrats alike.

Shortly after the first presidential debate, the yuan entered the International Monetary Fund’s Special Drawing Right (SDR) basket of top-tier currencies. With that, the Chinese boasted that the yuan was now in the same league as the other SDR currencies: USD, euro, Japanese yen, and the British pound. As part of China’s yuan promotion campaign, it declared that the yuan would be a serious challenger to the greenback as the world’s premier currency. While the yuan’s international use has grown rapidly, it started with a base of zero.

The dollar is King, and when it comes to currencies, Kings are difficult to dethrone. Even after the introduction of the euro in 1999, the USD has maintained its top spot as the currency held as official reserves, accounting for 63 percent of the total. When it comes to foreign exchange trading, the dollar is even more dominant, accounting for almost 88 percent of the turnover. Dollar notes are widely used internationally, too, with as much as two-thirds of all the greenbacks in circulation circulating overseas. In terms of the transactions handled by the Society for Worldwide Interbank Financial Telecommunication (SWIFT), the outfit that moves “money” among banks, the U.S. dollar has increased its dominance over the past few years, accounting for almost 52 percent of the total transactions (see the accompanying chart). 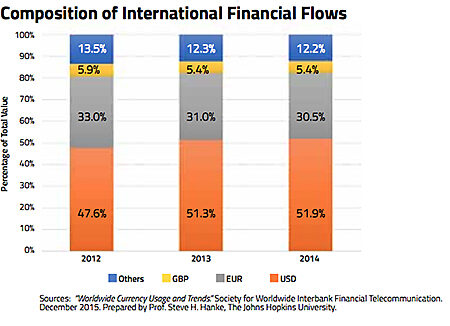 As with the introduction of the euro, claims that the yuan will dethrone the King are off the mark. For the past three millennia, there has always been a dominant world currency, and it’s very hard to challenge the King. This is evidenced by the longevity of dominant currencies. On average, they’ve reigned for 300 years. This would suggest that the U.S. dollar, unless the U.S. government makes a big mistake or a new disruption technology enters the stage, is probably going to be on the throne a while longer. Why?

To answer that question, we borrow from the work of Nobelist Robert Mundell. In Mundell’s study of the world’s dominant currencies over the past three millennia, he found that there was always one currency that dominated, and that the following five characteristics were associated with each dominant currency:

When viewing the twists and turns of the greenback in Jacque de Larosière’s anti-system, there is no better place to start than the Great Crash of 2008. The accompanying chart shows that the USD/€ exchange rate — the world’s most important price — fell a stunning 19.13 percent over a brief four month period. Linked to the soaring dollar, two other important prices, gold and oil, collapsed by 19.08 and 57.03 percent, respectively. Not surprisingly, the annual inflation rate in the U.S. moved from an alarming rate of 5.5 percent in July to an outright deflation of -1.96 percent a year later. Contrary to the Federal Reserve’s claims, the dance of the dollar and related changes in commodity prices and the level of inflation indicated that monetary policy was way too tight in late 2008. This caused massive instability that we still haven’t fully recovered from.

What can be done to reduce the instability in the current anti-system and mitigate the damage caused by the twists and turns of King dollar? The world’s two most important currencies — the dollar and the euro — should, via formal agreement, trade in a zone ($1.20 – $1.40 to the euro, for example). The European Central Bank would be obliged to maintain this zone of stability by defending a weak dollar via dollar purchases. Likewise, the Fed would be obliged to defend a weak euro by purchasing euros. Just what would have happened under such a system (counterfactually) since the introduction of the euro in 1999 is depicted in the accompanying chart. 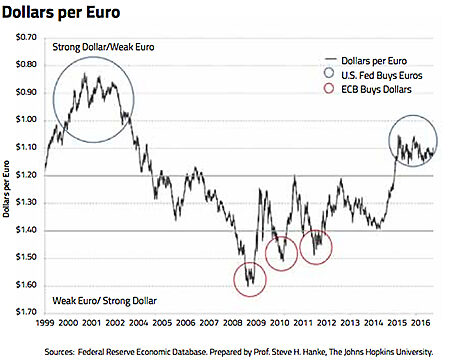