Since President Trump tapped Stephen Moore as his pick to serve on the Federal Reserve’s Board of Governors, the pundits have gone into overdrive. Most have taken liberties with ad hominem, thrashing and trashing Moore. Few have bothered to explore Moore’s ideas on monetary policy. And, those that have have given them a superficial treatment.

So, where is Moore coming from? He is a so-called “supply-sider.” And, supply-siders look at prices to indicate how tight or loose monetary policy is. In particular, they watch commodity and precious metals prices, the prices of credit (read: the shape of the yield curve and credit spreads), and foreign exchange rates.

This perspective is not particularly new, nor is it foreign to the halls of the Fed. Indeed, two of my good friends Manuel “Manley” Johnson and Wayne Angell served as Vice Chairman (1986-1990) and Governor of the Fed (1986-94), respectively. They both embraced a supply-side monetary policy perspective while putting in distinguished service at the Fed. Their monetary policy ideas about focusing on Ps (price) rather than Qs (the quantity of money) are laid out in a scholarly book that Manley Johnson co-authored with his former chief of staff Robert “Bob” Keleher: Monetary Policy, A Market Price Approach (1996). To bring the supply-side approach to monetary policy into focus, let’s consider exchange rates.

Exchange-rate instability creates problems—big problems. For example, as we “celebrate” the tenth anniversary of the Lehman Brothers bankruptcy, we should ask: were exchange rates stable back in the fall of 2008? As it turns out, one of the few who had a laser focus on what he deems the most important price in the world, the dollar-euro exchange rate, was another good friend, Nobelist Robert “Bob” Mundell. A founding father of supply-side economics, Bob is always focused on prices. That certainly separates Mundell from Ben Bernanke, who was Chairman of the Federal Reserve back in September of 2008. Bernanke saw fit to ignore fluctuations in the value of the dollar. Indeed, changes in the dollar’s exchange-rate did not appear as one of the six metrics on “Bernanke’s Dashboard” — the one the Chairman used to gauge the appropriateness of monetary policy.

Well, let’s take a look at what Mundell saw in the months surrounding the collapse of Lehman. He observed a wild swing in the dollar-euro exchange rate (see the table below). In the July-November 2008 period, the greenback appreciated almost 24% against the euro. Accompanying that swing was an even sharper plunge in the price of oil: crude crashed 57%. Gold also fell, dropping 22%. And, consistent with Mundell’s supply-side theories, changes in exchange rates transmit inflation (or deflation) into economies, and they can do so rapidly. Not surprisingly then, the annual rate of inflation in the U.S. moved from an alarming rate of 5.6% in July 2008 to an outright deflation of 2.1% a year later. This 7.7 percentage-point swing is truly stunning.

So, in terms of monetary policy, Mundell saw the obvious: the Fed was too tight — massively too tight. The dollar was soaring, and commodity prices were collapsing. Fed Chairman Bernanke saw none of this because exchange-rates weren’t even on his dashboard.

Perhaps it’s time to jettison the international anti-system and go for stability. So, how would we do that? The world’s two most important currencies — the dollar and the euro — should trade in a zone of stability ($1.20 – $1.40 per euro, for example) via formal agreement,. Under such an agreement, the European Central Bank (ECB) would be obliged to maintain this zone of stability by defending a weak dollar via dollar purchases. Likewise, the U.S. Treasury (UST) would be obliged to defend a weak euro by purchasing euros. Just what would have happened under such a system (counterfactually) since the introduction of the euro in 1999 is depicted in the chart below. When the euro-dollar exchange rate was less than $1.20 per euro and the euro was weak, the UST would have been purchasing euros (in the 1999 - 2003 and the 2014 - 2019 periods). When the euro-dollar exchange-rate was above $1.40 per euro and the dollar was weak, the ECB would have been purchasing dollars (in some of the 2007-2011 period). 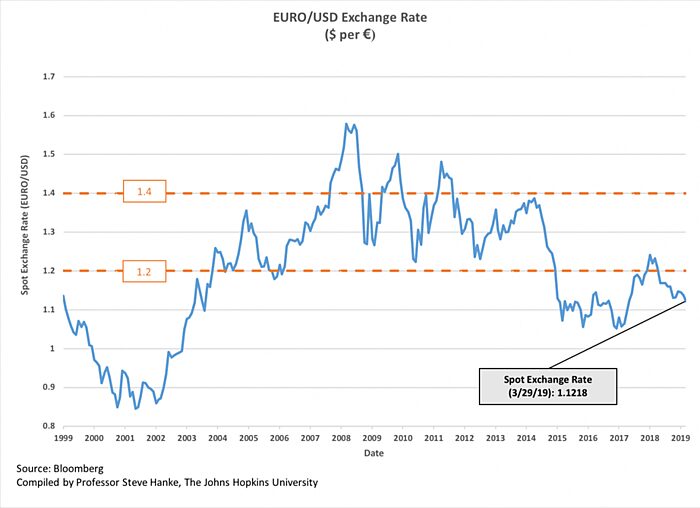 So, as a supply-sider, Moore might add a new perspective to the Fed’s deliberations — a perspective not seen since Manley Johnson and Wayne Angell left their positions.

Indeed, stability might not be everything, but everything is nothing without stability.