Why was the Great Depression so deep, and why did it drag on for so long? According to impressive research by Robert Higgs of the Independent Institute, it was because President Roosevelt abandoned his campaign promises of 1932: to cut federal spending, to balance the budget, to maintain a sound currency, and to rein in Washington’s bureaucracy. Instead, Roosevelt switched gears. Roosevelt and the Congress, according to Higgs, produced a “bewildering, incoherent mass of new expenditures, taxes, subsidies, regulations, and direct government participation in productive activities .… The New Deal created so much confusion, fear, uncertainty, and hostility among businessmen and investors that private investment and hence overall private economic activity never recovered enough to restore the high levels of production and employment enjoyed during the 1920s.”

Crucially, the economy failed to add anything to its capital stock between 1930 and 1940, when the net private investment for that period totaled a minus $3.1 billion.

Higgs’ granular analysis of this collapse in private investment led him to introduce and test a new concept: “regime uncertainty.” Higgs’ regime uncertainty is, in short, uncertainty about the course of economic policy — the rules of the game concerning taxes and regulations, for example. These rules of the game affect the net benefits and free cash flows investors derive from their property. Indeed, the rules affect the security of their property rights. So, when the degree of regime uncertainty increases, investors’ risk‐​adjusted discount rates increase and their appetites for making investments diminish.

Trump’s challenge will be to reduce regime uncertainty, and also introduce tax and regulatory policies that encourage private investment.

Since the Great Recession of 2009, regime uncertainty has been elevated. This has been measured by Scott R. Baker of Northwestern University, Nicholas Bloom of Stanford University and Steven J. Davis of the University of Chicago. Their "Economic Policy Uncertainty Index for the U.S." measures, in one index number, Higgs' regime uncertainty. In addition, there is a mountain of other evidence that confirms the ratcheting up of regime uncertainty during the tenures of Presidents George W. Bush and Barack Obama. For example, Pew Research Center surveys find that the percent of the public that trusts Washington, D.C. to do the right thing has fallen to all-time lows.

Just how bad is Trump's inherited legacy? As the accompanying chart shows, gross private domestic business investment, which does not include residential housing investment, has rebounded modestly since the Great Recession. But, most of this gross investment has been eaten up in the course of replacing capital that has been used up or became obsolete. Indeed, the private capital consumption allowances shown in the chart are huge. While these capital consumption figures are approximate, they are large enough to suggest that there is little left for net private business investment. This means that the total capital stock, after actually shrinking in 2009, has grown very little since then. This is bad news, as productivity is dependent on the quality and size of the economy's private capital stock. 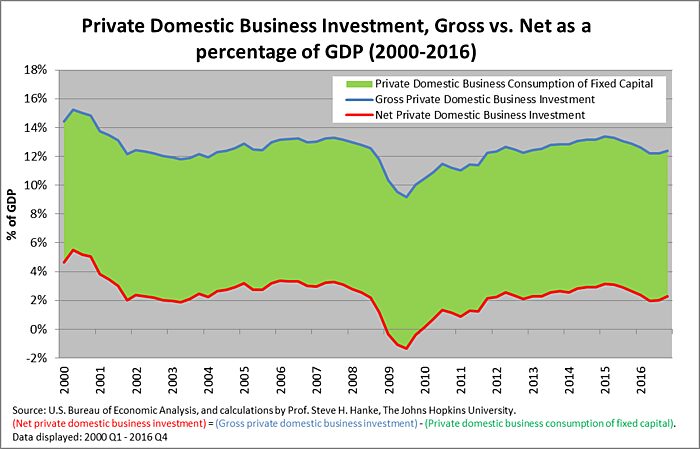