President Donald Trump doesn’t just want to build a wall along the southern border, he also wants Congress to hire 5,000 additional Border Patrol fdenardo1 on Fot​er​.com agents—a 25% increase—to patrol it. However, Border Patrol suffers from worse discipline, performance, and corruption problems than any other federal law enforcement agency, my study for the Cato Institute found.

Congress should fix those problems before even considering any new request for more agents.

Pumping more money and resources into a corrupt and low‐​performing agency will only reward failure and breed more problems without “securing the border.”

There are many other cases just like those, but the full extent of the problem is very unclear. Are these just a few bad apples? Or is it "conservative to estimate" that 5 percent of the Border Patrol force, adding up to about 1,000 agents, is corrupt, as James Tomsheck said after he was removed as head of one of the internal affairs departments that oversaw Border Patrol in 2014.

Government reports offer confusing, contradictory, and incomplete answers. According to evidence released under the Freedom of Information Act, 158 Customs and Border Protection (CBP) employees were convicted or charged with corruption from 2005 to 2016. The Department of Homeland Security Office of Inspector General found 358 corruption or misconduct convictions, but it doesn't distinguish between government employees and civilians who conspired with them. CBP further complicates this mess by distinguishing between "mission-compromising" convictions, which include drug and immigrant smuggling, and "non-mission-compromising" ones, which include sexually assaulting detainees and murder.

Not only are records of corruption and misconduct poorly reported but the government can't even agree on the definition of what constitutes a complaint. CBP even shifted the definition and reporting system for "complaints" in a way that reduced the number of those filed against Border Patrol officers. That's why Government Accountability Office (GAO) watchdogs recorded thousands more complaints made against sub-components of CBP than CBP itself records against the entire agency, which just strains credulity.

A new Cato Institute study analyzed Office of Personnel Management (OPM) data on the number of terminations for disciplinary and performance reasons by agency and occupation – data that includes (but is not limited to) those fired for corruption. This data is more reliable because the agency actually records the reasons for why an agent left or was fired, something neither the CBP nor Border Patrol does.

One, that its internal affairs department is just better at providing effective oversight and firing troublemakers. But this is laughable given that the oversight at Border Patrol deteriorated precipitously after 9/11.

Congress disbanded the old Immigration and Naturalization Service that housed Border Patrol after it approved student visas for two 9/11 hijackers about six months after they flew jet liners into the World Trade Center. Congress then created the Department of Homeland Security (DHS) that housed another agency called Customs and Border Protection (CBP) and made Border Patrol part of it. However, Congress transferred Border Patrol's old internal affairs division elsewhere and neglected to create another one. CBP cobbled together an internal affairs division but it did not have the authority to investigate criminal misconduct in Border Patrol until August 2014. Outside agencies tried to fill the gap before then. 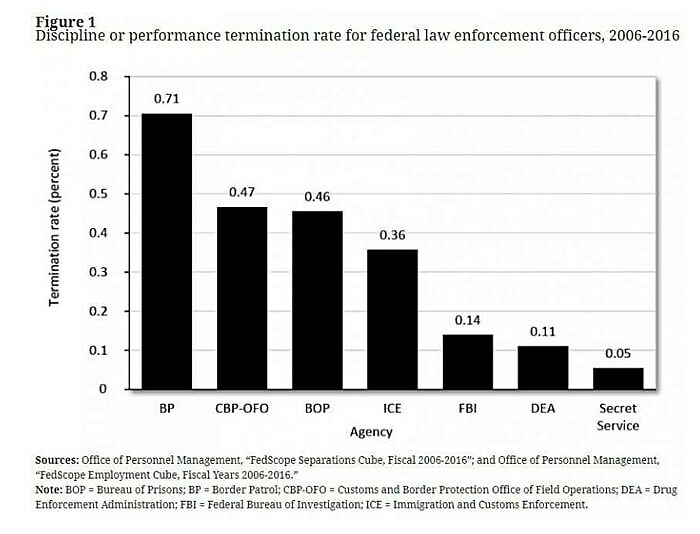 Two, the termination rate is simply a reflection of the agency's expansion. This doesn't hold much water either.

The government should at least get a grip on these issues before handing Border Patrol more taxpayer dollars to hire more agents.

And a good place to start would be by implementing the Homeland Security Advisory Council's (HSAC) recommendations. This would mean boosting agent accountability by improving internal affairs, especially by bringing the number of internal affairs officers up to 729. This would increase the ratio of internal affairs officers at Border Patrol to the same level as that of the New York City Police Department (NYPD). Many of the other reforms recommended by the Council—like better training and recording stops—likewise mirror those suggested for police departments across the country.

Furthermore, the Government Accountability Office should annually audit Border Patrol internal affairs through undercover investigations to catch agents breaking the law or otherwise misbehaving. Civil service protections should only extend to Border Patrol agents after two full years on the job rather than after one year, making it easy to fire troublesome agents before they become serious problems.

Most importantly, civilians should also have greater oversight just as they do for some police departments. Border Patrol agents after all operate in local communities, so it's only right that these communities should be able to form complaint review boards to oversee agent conduct—just like the committee New York City has for the NYPD. Related to this, all Border Patrol agent labor contracts should be public and scrutinized for provisions that inhibit prevention, detection, and punishment of corruption and misconduct.

Also, in the interest of transparency, the government should annually publish all corruption and misconduct information for every federal agency so that Border Patrol's track record can be compared with others, which is extremely difficult right now.

Congress should not authorize any additional hires until Border Patrol gets a grip and improves its personnel record to at least the level of other federal law enforcement agencies, which is hardly a high bar. Pumping more money and resources into a corrupt and low-performing agency will only reward failure and breed more problems without "securing the border."

Director of Immigration Studies and the Herbert A. Stiefel Center for Trade Policy Studies