Even a broken clock is right twice a day. And so it is with some of Donald Trump’s remarks about the North Atlantic Treaty Organization. In recent weeks, Trump has repeatedly called NATO “obsolete” and noted that the United States “can’t be the policemen to the world” while adding to its $19 trillion debt. Other NATO countries are “not paying their fair share,” he complained. “Either they have to pay up… or they have to get out… and if it breaks up NATO, it breaks up NATO,” he concluded. Before discussing the GOP presidential frontrunner’s ideas on international security any further, a brief anecdote.

Visiting my native country of Slovakia six years ago, I met a senior government official who asked me whether it would be possible for Slovakia to disband its military and pay the United States an annual protection fee instead. I said I did not know. Judging by the uniformly negative response of Washington’s foreign policy establishment to a similar idea recently floated by Trump, however, hell has a better chance of freezing over.

Ignore, if you will, the orange-faced protagonist of the protection fee idea. Ignore also America’s $19 trillion debt, half-a-trillion dollar annual deficits and a Pentagon budget that is equivalent to the military spending of the next 10 countries combined. Let us instead look at the issue of military spending from the perspective of some of our NATO allies. 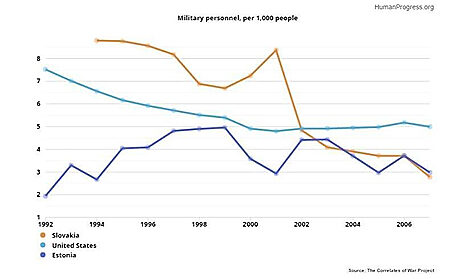 When communism ended, Slovakia had over 40,000 soldiers, more than 200 battle tanks and 100 fighter jets. Today, it has 13,000 soldiers, 22 tanks and 12 fighter jets. Similar reductions in military strength took place in many ex-communist countries after the fall of the Berlin Wall and continued after some of them acceded to NATO.

The reasons for that development were at least two-fold. First, governments in the region became democratic and started to prioritize the needs of the electorate (i.e., healthcare, welfare, infrastructure, etc.) over military spending. Second, free riding and moral hazard have set in. Again, Slovakia serves as a case in point. During the 2010 general election, Slovak nationalists claimed that the military atrophied to a point where it was incapable of defending the homeland. Yet, the nationalists were a part of the ruling coalition. When questioned about his party’s support for military cuts, the leader of the party conceded that Slovakia did not need additional military spending because “we enjoy protection primarily from NATO.”

The American military exists to protect the United States, not to police the world — regardless of who does or does not pay for it.

The nationalists were right. Slovakia cannot defend itself against any of its much larger neighbors, let alone Russia. From the perspective of some of Slovakia’s economists and politicians, the military is a waste of manpower (i.e., the soldiers could be more gainfully employed in the private sector) and a source of corruption (i.e., government procurement of military hardware has made many an Eastern European politician wealthy).

What’s true of Slovakia is also true of many other ex‐​communist countries. Estonia, for example, is a mature democracy and a free‐​market success story. As required by its NATO commitments, Estonia spends close to 2 percent of its gross domestic product on the military. The only problem is that Estonia’s entire gross domestic product amounted to $27 billion in 2014. The Russian military budget alone amounted to $70 billion.

Even if Estonia spent every penny on its military, it would still be no match for Russia. Everyone knows that standing between Estonia’s continued prosperity and independence on the one hand and Russian aggression on the other hand is not the Estonian military, but American armed forces. So, why partake in the futile task of building a credible Estonian deterrent, rather than pay for a real American one?

Trump is not alone in thinking that the United States is being “ripped off.” According to a new YouGov poll, 42 percent of Americans believe that “It’s time for Europe and other nations to spend on their defense.” If NATO is to continue and if the United States is to go on spending in excess of $600 billion on the Pentagon, why not recoup some of the investment?

Most of America’s foreign policy establishment is appalled by Trump’s views. They are happy for the United States to pay the lion’s share of global security costs. Others, myself included, disagree with Trump for altogether different reasons. NATO is not merely a financial burden to the United States. The American military exists to protect the United States, not to police the world — regardless of who does or does not pay for it.