The New York Times published an oped yesterday by Jared Bernstein and Dean Baker, which presents a badly misinformed view of trade deficits, budget deficits, and the causes of economic growth. Nearly every paragraph in the piece relies on an assailable premise or discredited assertion. The essence of their argument is that the U.S. trade deficit is to blame for slow U.S. economic growth and that the solution is to reduce that deficit by deliberately crippling imports and promoting exports. Their premise is wrong and their recommendations are even worse.

Bernstein and Baker are from the “leakage” school of thought, which posits that resources spent on imports vanish into the ether without any positive benefits accruing to the U.S. economy. They write: “Running a trade deficit means that income generated in the United States is being spent elsewhere. In that situation, labor demand — jobs to produce imported goods — shifts from here to there.”

That is such an elementary fallacy to commit that only one of two conclusions can be drawn: (1) The authors are not qualified to write about the subject or (2) they are hoping to advance a narrow agenda.

A trade surplus is not the purpose of trade and trade measures are not legitimate objectives of policy.

By purchasing more goods and services from foreigners than foreigners purchase from Americans — their argument goes — U.S. factories, farmers, and service providers are deprived of sales, which reduces domestic output, value added (GDP), and employment. But their argument relies on the assumption that the dollars sent to foreigners to purchase imports do not make their way back into the U.S. economy—an assumption that even undergraduate economics students know to be false.

The dollars that go abroad to purchase foreign goods and services (imports) and foreign assets (outward investment) are matched virtually identically by dollars coming back to the United States to purchase U.S. goods and services (exports) and U.S. assets (inward investment). Any trade deficit (net outflow of dollars) is matched by an investment surplus (net inflow of dollars). This process helps explain the absence of an inverse relationship between the trade deficit and jobs and between the trade deficit and domestic output, which is all that anyone needs to observe to appreciate how badly the Bernstein-Baker piece misses the mark.

As the chart below demonstrates, if anything, there is a positive relationship between the trade deficit and GDP. In years when the deficit is rising, GDP is increasing; when the deficit is falling, GDP tends to level off and stagnate. Only in the three most recent years has a growing economy (anemic as it has been) been contemporaneous with a declining trade deficit. But it’s worth noting that import growth was substantial during those years. 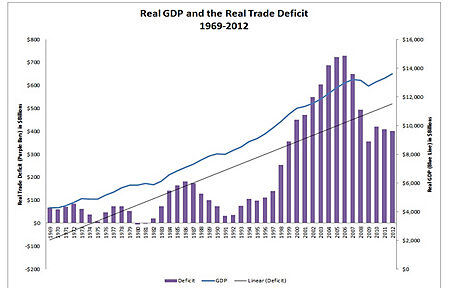 As the charts below reveal, in years when imports increase over the previous year, U.S. GDP and employment tend to increase from the previous year. In years when imports show a decline, output and employment also tend to decline. The high incidence of observations in the upper-right and lower-left quadrants in both graphs suggests positive relationships between imports and output. In fact, in only one of the 44 years observed did imports and output move in different directions. 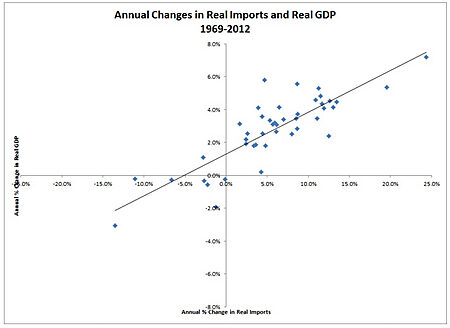 The relationship between imports and jobs is also demonstrated to be positive. In 39 of the 44 years observed, the measurements moved in the same direction. 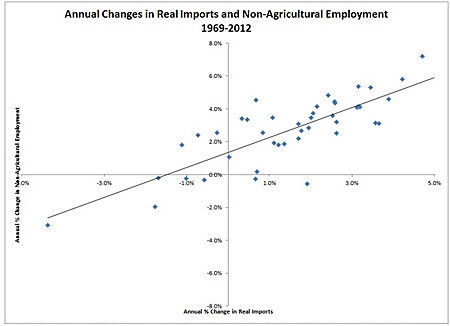 This inward investment produces real wealth and other benefits for American businesses, workers, and consumers. When dollars leave the economy to purchase imports and come back as foreign equity investment in U.S. businesses or foreign indirect investment in factories, research centers, or shopping malls, the U.S. economy enjoys benefits that would never have accrued had those dollars been prevented from going abroad in the first place.

In two recent papers (here and here), I demonstrate how inward FDI produces greater benefits than purely domestic investment does by comparing the performance of “insourcing companies” (foreign companies that invest, employ, design, and produce in the United States) to the U.S. private sector average over 10 years and across 20 different metrics, including: value added, capital expenditures, research and development expenditures, compensation, employee benefits, return on assets, intermediate goods purchases, exports, and taxes paid. Over the course of 10 years, insourcing companies performed better than the U.S. private-sector average on 17 of those 20 metrics, thereby raising average U.S. economic performance.

These findings suggest that running trade deficits may actually be a bonus for the United States since the investment surplus brings cream-of-the-crop foreign companies to U.S. shores, where industry best practices are disseminated, and novel ideas are spawned.

Moreover, contrary to the implications of Bernstein’s and Baker’s piece (and the overt claims of their fellow travellers), the trade deficit is not a running tab that we or our children will have to pay back to foreigners. The only portion of the trade deficit that the American public will have to pay back is that which finances the U.S. government’s debt, which accounts for about one-third of the value of all foreign investment and is not a failing of trade or investment policy, but a consequence of excessive government spending, which Bernstein and Baker contend has not been substantial enough.

By the second half of the op-ed, the authors’ objective becomes apparent. Citing foreign currency manipulation as an important reason why the trade deficit persists, Bernstein and Baker suggest that we could “pass legislation that gave the government the right to treat currency management as a violation of international trading rules, leading to offsetting tariffs.”

First off, it’s a bit fanciful to think the U.S. Congress can unilaterally pass legislation that gives the U.S. government the right to deem a foreign government’s action a violation of “international trading rules.” That “right” would have to come from an international agreement, not a U.S. law. But more substantively, economists across the political, academic, and geographical spectra disagree intensely on how to determine the proper market value of a currency, and thus how to measure currency manipulation. Recall the Schumer-Graham bill, which was introduced in several consecutive Congresses, but never came to pass. It would have imposed a 27.5% duty on all imports from China unless and until the Chinese government allowed the currency to appreciate by an amount deemed sufficient by Congress. You know how that figure — 27.5% — was determined? It was the midpoint of the range of credible estimates of Chinese RMB undervaluation — a range that spanned from 15% to 40%. Why was there such a range? Because economists don’t agree on how to measure the proper market value of a currency (beyond letting all currencies float freely).

Moreover, discerning the impact of currency values on trade flows is much trickier than the old economics textbooks would have you believe. Globalization and cross-border supply chains — particularly relevant to China, which is an export processing economy that imports a substantial portion of the raw materials and intermediate goods it uses to produce or assemble its final goods for export (about 50% of the value of Chinese exports to the United States is Chinese value-added; the rest is imported) — have complicated the relationship between currency value and trade. RMB appreciation has reduced the cost of imported inputs, enabling Chinese producers and assemblers to reduce their prices for export, keeping their exporters competitive and the bilateral trade deficit growing despite the 30 percent real appreciation in the RMB since 2005. I have gone into detail about this issue on several occasions, including here, here, and here.

Another important point in response to the authors’ call for taxes on imports of “currency managers” is that many different factors affect the value of a currency. How should currency manager be defined? Which determinants should constitute intentional interventions designed to secure a trade advantage? Exchange rate intervention? Expansionary monetary policy? The utterances of central bankers that move interest and exchange rates? Presumably, the authors seek a definition so amorphously “gerrymandered” as to excuse U.S. quantitative easing, while ensnaring the virtually identical Japanese variety. If they think expanding the money supply through quantitative easing, while “seeking” to secure a trade advantage residually will nab Japan but not the United States, remember that it is the United States that has the official government policy of doubling exports by the end of 2014.

And finally, why would we be better off taxing imports? They’re pro-cyclical. They’re crucial to U.S. producers (65 percent of all U.S. import value in 2012 was intermediate goods and capital equipment). They increase real incomes through their competitive effects on variety and price.

Most incongruently, the authors suggest that “We could also tax foreign holdings of United States Treasuries, making the usual tactic of currency managers more expensive. And we could institute reciprocity into the process of currency management: If a country wants to buy our Treasuries, we must be able to buy theirs.”

So let’s get this straight. The same guys who are advocating greater borrowing and spending by the U.S. government to “grow the economy” are simultaneously proposing that the interest rates on that borrowing be raised? Somehow they seem to think that the U.S. government is doing its creditors a favor by allowing them to lend the United States the necessary resources to fund its profligacy. Do they not realize (or care) that interest on the national debt accounts for a significant chunk of current and future budgets, and that it will only increase as interest rates rise? And that is what happens when you chase away the supply of credit by taxing it.

The bottom line is that the authors see trade as a zero sum game, where exports are Team USA’s points, imports are the foreigners’ points, the trade account is the scoreboard, and since it shows a deficit, the United States is losing at trade — and it’s losing because foreigners are cheating. A trade surplus is not the purpose of trade and trade measures are not legitimate objectives of policy. Economic growth and investment are the objectives of economic policy, both of which have thrived over the years contemporaneously with trade deficits.

Hopefully, this post offers readers a broader and more accurate perspective on these issues that are so easily and frequently demagogued.