Education, both constitutionally and as a practical matter, is a state and local responsibility. The Constitution gives Washington no authority to fund or govern education, and individual communities know their needs better than politicians in DC. If the federal government is going to start funding construction and maintenance of schools, there must be a serious crisis, right?

The condition of public schools must be atrocious, right? Wrong.

Democrats on the House Committee on Education and Labor seem to think there is. Yesterday, the committee held a hearing titled Underpaid Teachers and Crumbling Schools: How Underfunding Public Education Shortchanges America’s Students, largely to introduce legislation that would commit federal dollars to school construction and maintenance. According to remarks by committee chairman Bobby Scott (D-VA), the Rebuild America's Schools Act“would create a $70 billion grant program and $30 billion tax credit bond program targeted at improving the physical and digital infrastructure at high-poverty schools.”

$100 billion is a lot of new spending, especially considering that the national debt just surpassed $22 trillion. The condition of public schools must be atrocious, right?

According to the most recent federal report on public school facilities, as of 2012-13 only 3% of permanent building were in “poor” condition, meaning the buildings failed to meet “minimum requirements for normal school performance.” That rose to 9% for portable buildings. Matters did not seem much worse in the poorest districts. Districts with at least 75% low-income students had only 4% of permanent buildings in poor condition, and roughly 8% of portables.

Ideally all buildings would be in terrific condition and clearly some are unsatisfactory. But an epidemic of schools turning to dust, such that Washington should ignore the Constitution and shell out ten-of-billions of taxpayer dollars? Nope.

There is, consistent with the federal findings, little evidence that districts have been unable to undertake construction projects without lots of new federal bucks. As reported in the “2018 Facilities and Construction Brief” from School Planning and Management, 68% of districts surveyed had completed construction projects in 2017, and 72% expected to complete projects in 2018. And the trend is not just districts building new schools, but bigger schools. According to a review of 19 years of school construction data by the publication, between 1995 and 2014 space increased by 30 square feet for each high school student, 45 square feet for each middle school child, and 80 square feet per elementary school youngster.

This shouldn’t surprise anyone. What is more likely to make a splash for district leaders? Quietly maintaining existing buildings and constructing basic but effective schools, or erecting magnificent edifices?

That said, often times, it appears, district residents don’t much care for the costs of building new schools. It also seems that districts and states are highly inefficient when it comes to creating and maintaining infrastructure. A list of “issues facing institutions” in the 2018 School Planning and Management brief includes “resistance by voters to approve bonds with property tax increases;” problems with “preventative maintenance…and having staff abide and adhere to scheduling;” “getting plans approved at State Education Department in a timely period;” and “regulatory requirements.” 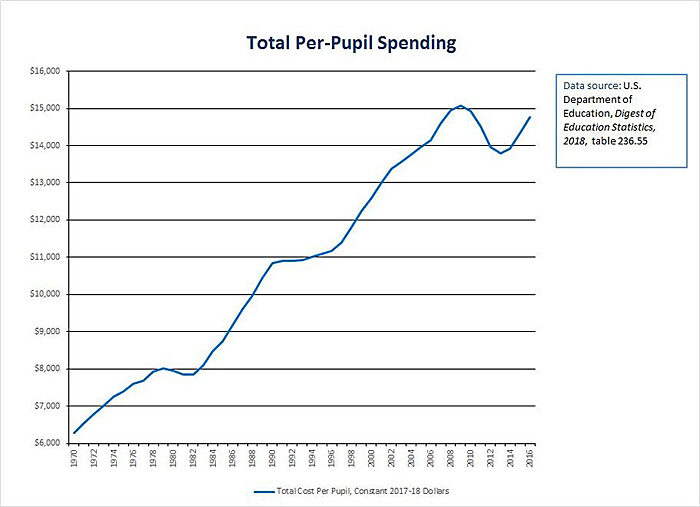 There is little evidence of a public schooling infrastructure crisis, and massive new federal spending would likely send much money from taxpayers outside of districts to taxpayers in districts who refuse to use their own money for new construction. Maybe that reluctance is because many taxpayers sense that there hasn’t been broad “underfunding” of public schooling or a building crisis. As the chart above shows, save a drop during the Great Recession, inflation-adjusted spending on public schooling has risen for decades, and is on track to return to record heights.